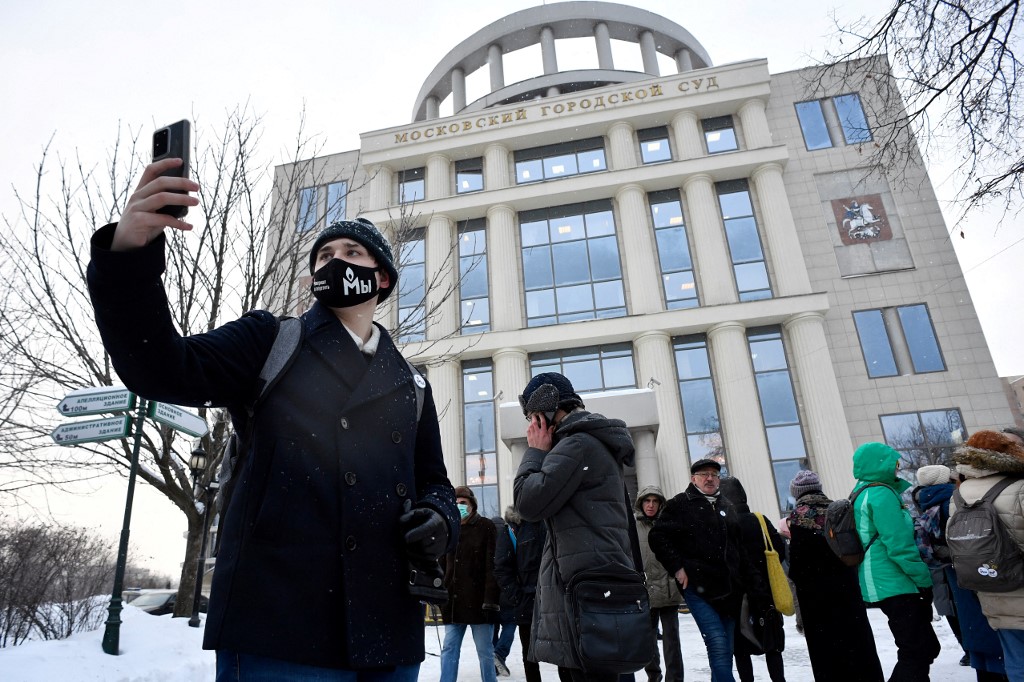 Memorial International supporters stand outside the Moscow City Court where a hearing over liquidation of Memorial’s Human Rights Centre is ongoing, in Moscow on December 29, 2021. — AFP pic

MOSCOW, Dec 29 — A Moscow court today heard a case against an arm of Memorial group that campaigns against current rights abuses in Russia, a day after the Supreme Court outlawed the main organisation, which chronicled Stalin-era purges.

The landmark ruling yesterday against Memorial International, the top rights group’s central structure, sparked an international backlash, with the United States and the European Union condemning its closure.

Founded in 1989 by Soviet dissidents including Nobel Peace Prize laureate Andrei Sakharov, Memorial is Russia’s most prominent rights organisation. It has chronicled Stalin-era purges and also campaigned for the rights of contemporary political prisoners and other marginalised groups.

Yesterday, Russia’s Supreme Court ordered the closure of Memorial International, which maintains the network’s extensive archives in Moscow and coordinates the work of regional offices.

The shutdown came after prosecutors accused Memorial of failing to mark all of its publications with a label of “foreign agent”, the tag for organisations that receive funds from overseas. The prosecution also said Memorial “creates a false image of the USSR as a terrorist state and denigrates the memory of World War II”.

In a separate case, prosecutors have also asked to dissolve Memorial’s Human Rights Centre for the failure to use the “foreign agent” label on its publications and for allegedly justifying terrorism and extremism.

At the start of today’s hearing, a prosecutor accused Memorial of “actively” supporting extremist organisations and organisations designated as “foreign agents.”

The prosecutor charged it was in fact Memorial that violated rights and freedoms.

Political observers say that the charges of extremism and terrorism have been used by Russian authorities to punish Putin critics.

The trials cap a year that began with the jailing of Vladimir Putin’s top critic Alexei Navalny and signal the end of an era in Russia’s post-Soviet democratisation process, which began 30 years ago this month.

A Memorial lawyer, who spoke to AFP on condition of anonymity, said ahead of the new hearing they did not doubt that the court would today rule to shut down Memorial’s Human Rights Centre as well.

Human Rights Watch Executive Director Kenneth Roth said he also feared that the centre would be shut down.

“It is an utter outrage that the Kremlin is now moving to shut Memorial down,” he said in a video statement.

“It speaks to the fears of the Russian government that it is no longer willing to tolerate the honest and objective accounting of its conduct that Memorial provides,” he added.

“If that mirror is too awful to look at, the answer is to change the conduct, not to shatter the mirror.”

In a statement Tuesday evening, Memorial International vowed to appeal and find “legal ways” to continue its work.

“Memorial is not an organisation, it is not even a social movement,” the statement said.

“Memorial is the need of the citizens of Russia to know the truth about its tragic past, about the fate of many millions of people.”

Memorial’s rights centre has campaigned for the rights of political prisoners, migrants and other disadvantaged groups, and highlighted abuses, especially in the turbulent North Caucasus region that includes Chechnya.

The centre has also compiled a list of political prisoners that includes Navalny and members of regional minorities outlawed in Russia including the Jehovah’s Witnesses.

Putin has, however, criticised its work, accusing the group of advocating for “terrorist and extremist organisations”.

“The people of Russia –- and the memory of the millions who suffered from Soviet-era repression –- deserve better,” said US Secretary of State Antony Blinken.

EU foreign policy chief Josep Borrell tweeted: “Critical looks on their past are essential for the healthy development and progress of societies.”

“Even by the standards of 2021, the closure of Memorial is an extraordinary event. A monstrous one,” Meduza, an independent news website, said in an editorial. — AFP