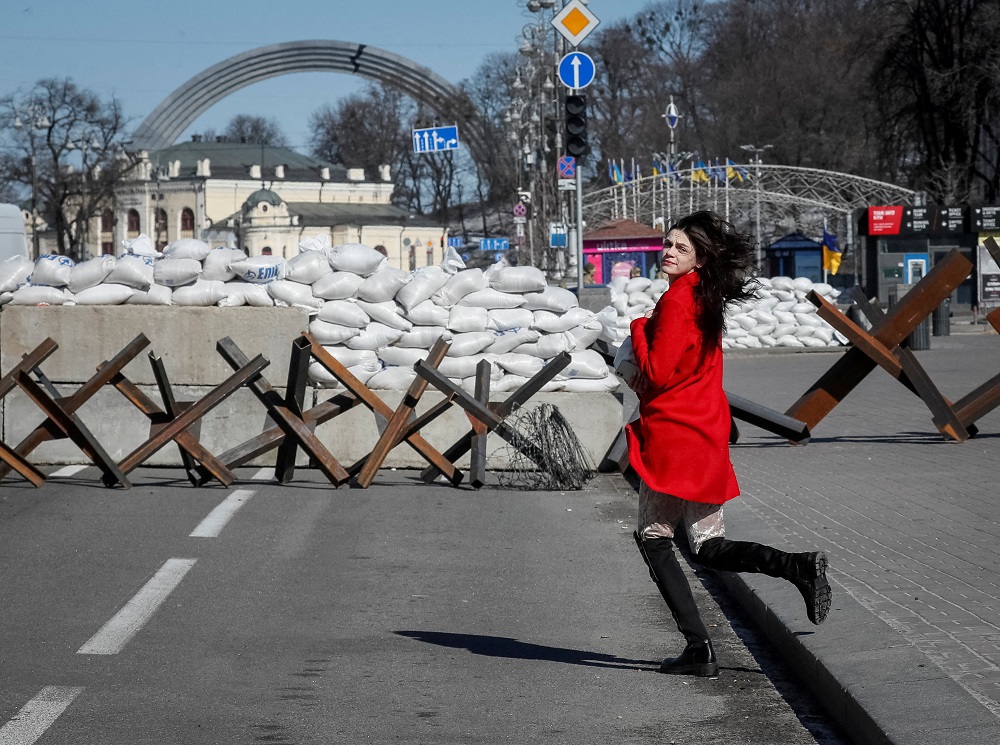 A woman runs across the street next to an anti-tank constructions in central Kyiv, Ukraine March 10, 2022. — Reuters pic

KYIV, March 12 — Russian forces inched towards Kyiv and pounded civilian areas in other Ukrainian cities yesterday, drawing warnings of “unimaginable tragedy” as the United States and the EU moved to tighten the economic noose around the Kremlin.

Sixteen days after Moscow shocked the world by invading Ukraine, the United Nations and others said it may be committing war crimes in cities such as Mariupol, which for days now has been besieged by Vladimir Putin’s forces.

Yesterday officials in the southern port said more than 1,500 people had been killed during 12 days of attacks.

Survivors have been trying to flee Russian bombardment in a freezing city left without water or heating, and running out of food. The situation is “desperate,” a Doctors Without Borders official said.

“Hundreds of thousands of people… are for all intents and purposes besieged,” Stephen Cornish, one of those heading the medical charity’s Ukraine operation, told AFP in an interview.

“Sieges are a medieval practice that have been outlawed by the modern rules of war for good reason.”

US President Joe Biden yesterday again ruled out direct action against nuclear-armed Russia, warning that it would lead to “World War III.”

The United States and the European Union also suspended the export of their luxury goods to Russia.

“Putin must pay the price. He cannot pursue a war that threatens the very foundation of international peace and stability and then ask for help from the international community,” Biden said from the White House.

He spoke as the United Nations said 2.5 million people had now fled Ukraine and around two million more had been internally displaced by the war.

Yulia, a 29-year-old teacher who fled Mariupol, said her mother-in-law was still there, and told them “the attacks don’t stop”.

“There are many corpses on the street and nobody buries them,” she told AFP.

In a video address released today, Zelensky appealed to the mothers of Russian soldiers to prevent their sons being sent to war.

“I want to say this once again to Russian mothers, especially mothers of conscripts. Do not send your children to war in a foreign country,” he said.

In Ukraine’s second city Kharkiv, doctors at a hospital described spending two days pumping ash from the stomach of an eight-year-old child whose home was blasted by a Russian missile.

“He still has cinders in his lungs,” Dima Kasyanov’s doctor told AFP.

Images of its charred or destroyed buildings — including a kindergarten with windows blown out — now join those from Kharkiv and Mariupol as testimony to the brutal conflict.

“Today, we were supposed to host people who need a lot of support,” said Svetlana Kalenecheko, who lives and works in a clinic that was damaged.

“Now we can’t help anyone.”

The attacks on civilians prompted a new flurry of warnings from the Hague and the United Nations yesterday that Russia is committing war crimes.

“We are really heading towards an unimaginable tragedy,” Cornish, of Doctors Without Borders, warned, insisting that “there is still time to avoid it, and we must see it avoided”.

Meanwhile the Kremlin is slowly surrounding Kyiv, with Ukrainian presidential adviser Mykhailo Podolyak calling it a “city under siege”.

He tweeted that it was “ready to fight”, with checkpoints prepared and supply lines in place, adding: “Kyiv will stand until the end”.

The Ukrainian military has said Russia is trying to take out Kyiv’s defences to the north and west, where suburbs including Irpin and Bucha have already endured days of heavy bombardment.

Russian armoured vehicles are also advancing on the capital’s northeast.

As the slow but steady advance continues, so has the tide of refugees.

Around 100,000 people have been able to leave the northeastern city of Sumy, the eastern city of Izyum, and areas northwest of Kyiv in the last two days, Ukrainian officials said.

“In the Sumy, Kyiv and Donetsk regions, there is no more electricity. Yes, there are problems with heating. There is no gas, no water,” he said.

Foreign combatants have already entered the Ukrainian conflict on both sides, and yesterday the Kremlin ramped up efforts to bring in reinforcements, particularly from Syria.

A furious Zelensky accused Russia of hiring “murderers from Syria, a country where everything has been destroyed… like they are doing here to us”.

In southern Ukraine, Russian soldiers abducted the mayor of Melitopol, which Zelensky said was a “sign of weakness” and a “crime against democracy”.

The global ripple effects of the conflict continued elsewhere.

Last-minute Russian demands related to the conflict threatened to derail the near-complete process of reviving the Iranian nuclear deal Friday.

And the fighting spurred vows to bolster the European Union’s defences, with EU leaders describing the invasion as a wake-up call.

Russia also moved yesterday to block Instagram and launch a criminal case against its owner Meta, as Moscow fired back at the tech giant for allowing posts calling for violence against Russian forces.

‘We will not fight’

Talks have so far made no progress towards ending the fighting.

Putin has said negotiations were being held “almost daily”, and US and European stock markets rose yesterday on his comments that there had been “certain positive shifts”.

But US Vice President Kamala Harris, speaking in Bucharest, said the Russian leader had shown “no sign of engaging in serious diplomacy”.

The US envoy said Russia had made the claims as part of a “false flag effort” for using chemical weapons of its own in Ukraine.

Biden warned Russia would pay a “severe price” if it used chemical weapons.

But he again carefully steered clear of any indication that such an attack would be a red line that could draw direct US military action.

“We will not fight a war against Russia in Ukraine,” he said. — AFP