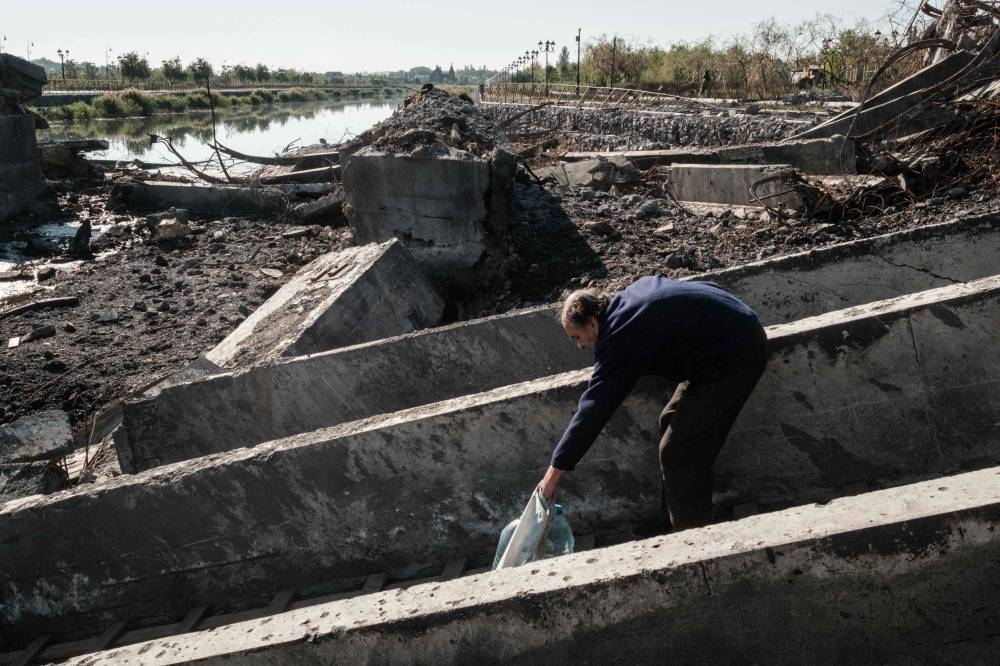 This video grab taken and released on October 8, 2022 shows thick black smoke rising from a fire on the Kerch bridge that links Crimea to Russia. — AFP pic

Dramatic social media footage showed the bridge on fire with parts plunging into the sea.

“Today at 6:07 am (0307 GMT) on the road traffic side of the Crimean bridge … a car bomb exploded, setting fire to seven oil tankers being carried by rail to Crimea,” Russian news agencies cited the national anti-terrorism committee as saying.

The bridge, personally inaugurated by President Vladimir Putin in 2018, is a vital transport link for carrying military equipment to Russian soldiers fighting in Ukraine.

Moscow had maintained the bridge crossing was safe despite the fighting.

The Kremlin spokesman said Putin had ordered a commission to be set up to look into the blast, Russian news agencies reported.

Russia’s powerful investigative committee opened a criminal probe into the explosion and sent detectives to the scene.

It said a truck exploded “on the automobile part of the Crimean bridge from the side of the Taman Peninsula”.

This “caused seven fuel tanks to ignite on a train heading towards the Crimea Peninsula. As a result, two lanes partially collapsed.”

While officials in Moscow stopped short of blaming Kyiv, an official in Russian-installed Crimea pointed the finger at “Ukrainian vandals”.

The head of the office of Ukraine’s presidency, Andrii Podolyak, took to Twitter posting a picture of a long section of the bridge half-submerged in the waters.

“Crimea, the bridge, the beginning,” he wrote.

“Everything illegal must be destroyed, everything stolen must be returned to Ukraine, everything occupied by Russia must be expelled.”

There have been several explosions at Russian military installations in the Crimean peninsula and if it is established that Ukraine was behind the latest blast, alarm bells may sound with the bridge so far from the front line.

The blasts come after Ukraine’s recent lightning territorial gains in the east and south that have undermined the Kremlin’s claim that it annexed Donetsk, neighbouring Lugansk and the southern regions of Zaporizhzhia and Kherson.

The announcement came as Russia’s Orthodox leader said President Vladimir Putin’s rule had been mandated by God, congratulating him on his 70th birthday, and as the Nobel Committee awarded the Peace Prize to rights defenders in Russia, Ukraine and Belarus.

A man takes steps carefully while carrying water bottles as he crosses the destroyed bridge in the frontline town of Bakhmut in the Donetsk region on October 7, 2022, amid the Russian invasion of Ukraine. — AFP pic

Separatist forces in the war-battered Donetsk region said they had retaken a series of villages near the Ukraine-controlled industrial town of Bakhmut, which has been under Russian shelling for weeks.

AFP journalists in the centre of Bakhmut heard the sound of heavy artillery and multiple rocket launch systems near the remains of a smashed bridge over the Bakhmutka river.

“On the territory of the Donetsk People’s Republic, a grouping of troops of the Donetsk and Lugansk republics, with fire support from Russian forces, liberated Otradovka, Veselaya Dolina and Zaitsevo,” separatist forces said on social media.

The Donetsk region, which has been partially controlled by Kremlin-backed separatists for years, is a key prize for Russian forces, which invaded Ukraine in February.

But Ukraine’s troops in recent weeks have been pushing back against Russian soldiers across the front lines in the south and in the east, including in parts of Donetsk.

“This week alone, our soldiers liberated 776 square kilometres of territory in the east of our country and 29 settlements, including six in Lugansk region,” he said.

Thirty people were killed last week when a convoy of civilian cars in the Zaporizhzhia region was shelled in an attack Kyiv blamed on Moscow.

Zelensky has pushed to punish Russia in other areas, urging Brussels to ramp up pressure on its energy sector — a day after the EU imposed a fresh round of sanctions on Moscow.

The International Monetary Fund also announced Friday it would provide US$1.3 billion (RM6.05 billion) in emergency aid to Ukraine.

In the more than seven months since Russia’s offensive, Putin has made thinly veiled threats of using nuclear weapons.

US President Joe Biden on Thursday warned the world was facing “Armageddon” as Putin may use his atomic arsenal.

But by Friday the White House dialled back the alarm, saying the president’s comments did not reflect new intelligence. — AFP