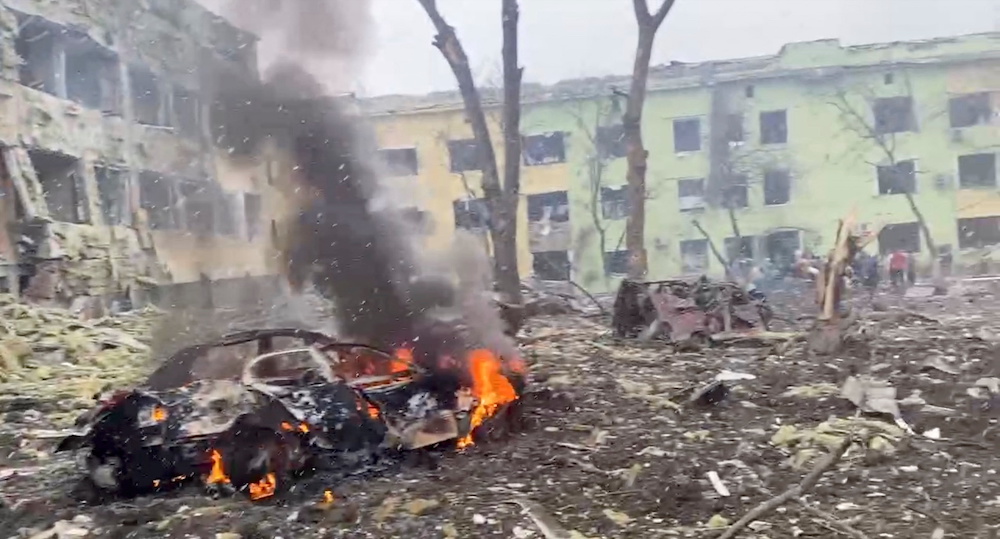 File photo of a car burning after the destruction of Mariupol children’s hospital as Russia’s invasion of Ukraine continues, in Mariupol, Ukraine March 9, 2022 in this still image. — Ukraine Military handout via Reuters

The statement from Rustam Minnekayev, the deputy commander, is one of the most detailed about Moscow’s ambitions in Ukraine and suggests Russia does not plan to wind down its offensive there anytime soon.

The Interfax and TASS news agencies cited him as saying that full control of southern Ukraine would improve Russian access to Moldova’s pro-Russian breakaway region of Transdniestria, which borders Ukraine and which Kyiv fears could be used as a launch pad for new attacks.

“Control over the south of Ukraine is another way to Transdniestria, where there is also evidence that the Russian-speaking population is being oppressed,” TASS quoted Minnekayev as saying at a meeting in Russia’s central Sverdlovsk region.

Moldova’s foreign ministry said it had summoned the Russian ambassador to express “deep concern” about the remarks.

“These statements are unfounded and contradict the position of the Russian Federation supporting the sovereignty and territorial integrity of the republic of Moldova,” it said on its website.

“During the meeting, it was reiterated that the republic of Moldova … is a neutral state and this principle must be respected by all international actors, including the Russian Federation.”

Kyiv earlier this month said that an airfield in the Transdniestria region was being prepared to receive aircraft and be used by Moscow to fly in Ukraine-bound troops, allegations that Moldova’s defence ministry and authorities in Transdniestria denied.

Minnekayev was not cited as providing any evidence for or details of the alleged oppression in Transdniestria.

He was quoted as saying that Russia planned to forge a land corridor between Crimea, the Black Sea peninsula which it annexed in 2014, and Donbas in eastern Ukraine.

The last Ukrainian fighters left in the port city of Mariupol in Donbas are holed up at a vast industrial facility which President Vladimir Putin has ordered to be blockaded rather than stormed. Mariupol sits between areas held by Russian separatists and Crimea. Its capture would allow Russia to link the two areas.

Minnekayev was cited as saying by Russia’s RIA news agency that media reports of Russian military setbacks were wide of the mark.

“The media are now talking a lot about some failures of our armed forces. But this is not the case. In the first days … the tactics of Ukrainian units were designed to ensure that, having pulled ahead, individual groups of Russian troops fell into pre prepared ambushes and suffered losses,” RIA cited him as saying.

“But the Russian armed forces very quickly adapted to this and changed tactics.”

According to RIA, he also said that daily missile and other strikes against Ukrainian forces meant Russia could do serious damage without losing troops.

Russia sent tens of thousands of troops into Ukraine on February 24 in what it called an operation to degrade its southern neighbour’s military capabilities and root out people it called dangerous nationalists.

Ukrainian forces have mounted stiff resistance and the West has imposed sweeping sanctions on Russia in an effort to force it to withdraw its forces. — Reuters