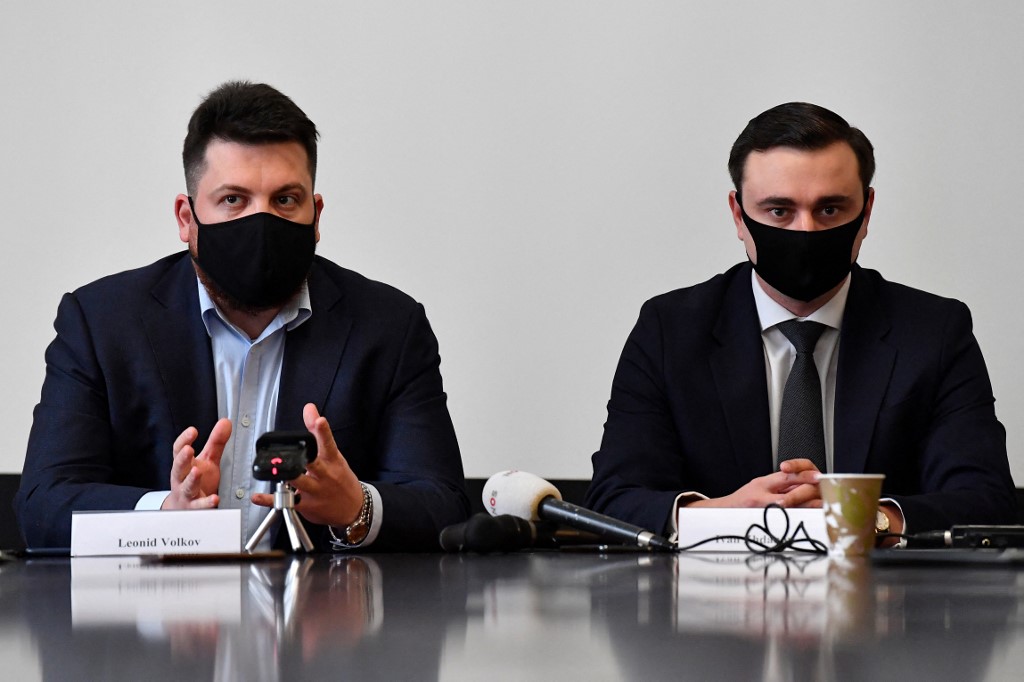 In this file photo taken on February 22, 2021 chief of Staff and political director of Russian opposition leader Alexei Navalny, Leonid Volkov (left) and CEO of the anti-corruption foundation, Ivan Zhdanov (right) give a press conference at the Lithuanian Embassy in Brussels. — AFP pic

The move by Russian authorities to arrest Navalny on his return to Russia from Germany last year ushered in a months-long crackdown that has seen most senior opposition figures either exiled or jailed.

Leonid Volkov, 41, and 33-year-old Ivan Zhdanov, who both left Russia as authorities were clamping down on the opposition and dissenting voices, were seen Friday in the database compiled by the Federal Service for Financial Monitoring.

The decision puts them on a par with right-wing nationalist groups and foreign terrorist organisations, including the Taliban and the so-called Islamic State group.

Zhdanov was dismissive of the news, telling the liberal-leaning Echo of Moscow radio station that the designation “will not affect me and my life in any way”.

On Twitter, he wrote that he believes the measure will become more widespread, describing himself and Volkov as “pioneers for this kind of nonsense”.

The move is the latest in a protracted and historic crackdown on dissent in Russia that intensified after Navalny’s arrest and jailing for more than two years on old fraud charges.

Almost all of his top allies have since fled the country.

Allies say she is facing up to 12 years in prison for working with an extremist organisation.

Navalny was detained in January 2021 on arrival from Germany, where he was recovering from a poisoning attack he and the West blame on the Kremlin.

His poisoning and arrest sparked widespread condemnation abroad as well as sanctions from Western capitals.

The European Parliament last year awarded Navalny the Sakharov Prize for Freedom of Thought after he was nominated but passed over for the Nobel Peace Prize.

In a post from his prison outside Moscow, Navalny yesterday said a documentary about his poisoning ordeal was to be released shortly by CNN and HBO Max, quipping “you will certainly see it before me”.

CNN described the upcoming film as a “revealing fly-on-the-wall documentary thriller” but did not say when it would be released.

Investigators last year launched a new extremism probe against Navalny that could see the opposition leader spend up to 10 more years in jail.

In December, courts ordered the shutdown of the country’s most prominent rights group, Memorial.

Founded in 1989 by Soviet dissidents including Nobel Peace Prize laureate Andrei Sakharov, the group chronicled Stalin-era purges and campaigned for the rights of political prisoners, migrants and other disadvantaged groups.

The rulings were denounced by the United Nations and Western governments, which accused Moscow of stifling freedom of expression. — AFP