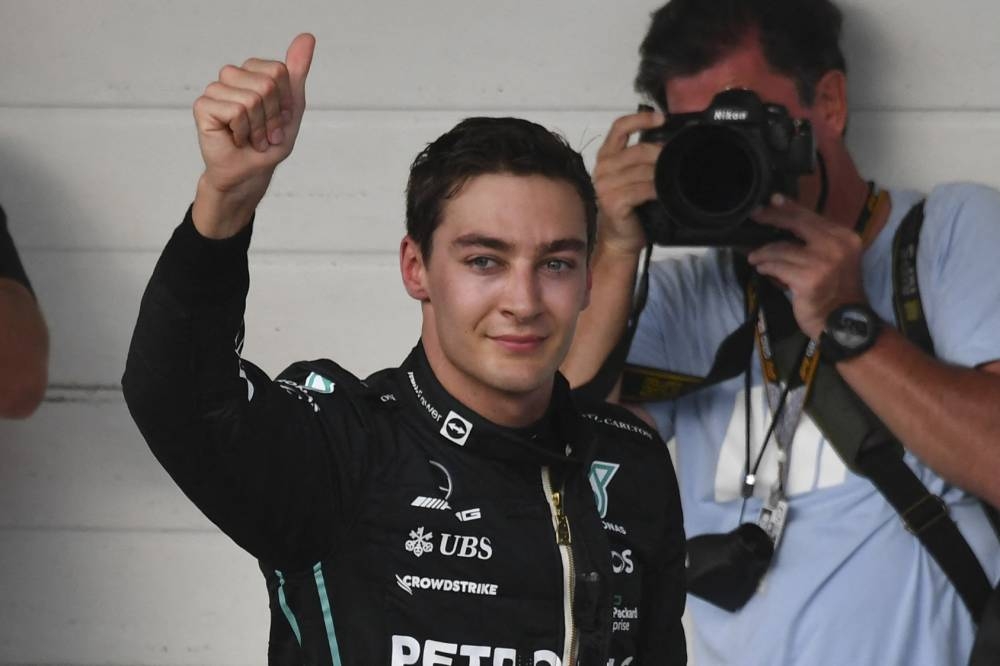 Mercedes’ British driver George Russell celebrates after winning the sprint qualifying to obtain the pole position at the Autodromo Jose Carlos Pace racetrack, also known as Interlagos, in Sao Paulo, Brazil, on November 12, 2022, ahead of the Formula One Brazil Grand Prix. — AFP pic

Driving with aplomb and confidence, the 24-year-old Briton shrugged off his spin in the rain in Friday’s qualifying session to attack from the start, passing Red Bull’s two-time champion Max Verstappen on lap 15 to grab the lead.

As Sainz is set to take a five-place grid penalty for taking a new engine, Mercedes will lock out the front row of the grid on Sunday — if an investigation into a possible starting procedure infringement by Hamilton is not penalised.

“It was incredible,” said Russell. “I wasn’t expecting to have that much pace, but I think it goes to show the hard work everyone is putting in and the progress we have made in these last few races.

“The car has been feeling so great. Obviously, it’s difficult to know how Max would have got on it he had been on the soft tyres — instead of mediums — but nevertheless it’s a great feeling.

“It’s crazy to think we are both starting from the front row. Lewis did a great job after starting P8, but I’m sure Max is going to be flying tomorrow, but we are in a luxurious position and maybe we can split our strategy to go for a win.”

It was Mercedes’ first win this year, albeit it in a sprint race, and gives them a perfect opportunity to claim their first Grand Prix victory of the season if they can overcome a slight tyres disadvantage.

Verstappen and Red Bull will start with two sets of soft tyres available while Mercedes have only one, having taken an extra set for the sprint race, and will need to use a set of ‘scrubbed’ softs.

The Dutchman, however, was not convinced that he can find the pace to overhaul the revived ‘silver arrows’ and claim a record-increasing 15th win of the season.

“Today, it didn’t work out somehow, but even on soft tyres, I was too slow,” he said. “We have way too much degradation here, so we have to analyse it and see what we can do.

“At the end of the day, if you have so much degradation, it doesn’t matter what tyres you put on.”

Hamilton, expecting to start alongside Russell in an all-Mercedes front row, said: “Wow, it has been such an incredible week and I am so happy to be here.

“It is an amazing result for us to be on the front row. It’s incredible! From there, we should be able to work as a team and hold off the guys behind us.

“We will try hard and if we can have some good degradation, hopefully some good weather and a fight, it will be great. And a win here for Brazil would be incredible!”

Hamilton was officially granted Brazilian citizenship earlier this week and is seeking a win to preserve his record of winning at least once in every season of his career.

Russell, in his 81st Grand Prix weekend, started third on the grid behind maiden pole-sitter Kevin Magnussen of Haas and Verstappen of Red Bull, but powered to a thrilling triumph in a breathless 24-lap contest.

Verstappen, who passed Magnussen at the start of lap three, was the only front-runner on medium tyres and was unable to resist Russell’s pace and then fell back to fourth after a brush with Sainz.

He finished ahead of Red Bull team-mate Sergio Perez and Charles Leclerc in the second Ferrari.

His win was Mercedes’ first success this season.