Real Madrid, Juventus and Barca not giving up on controversial Super League 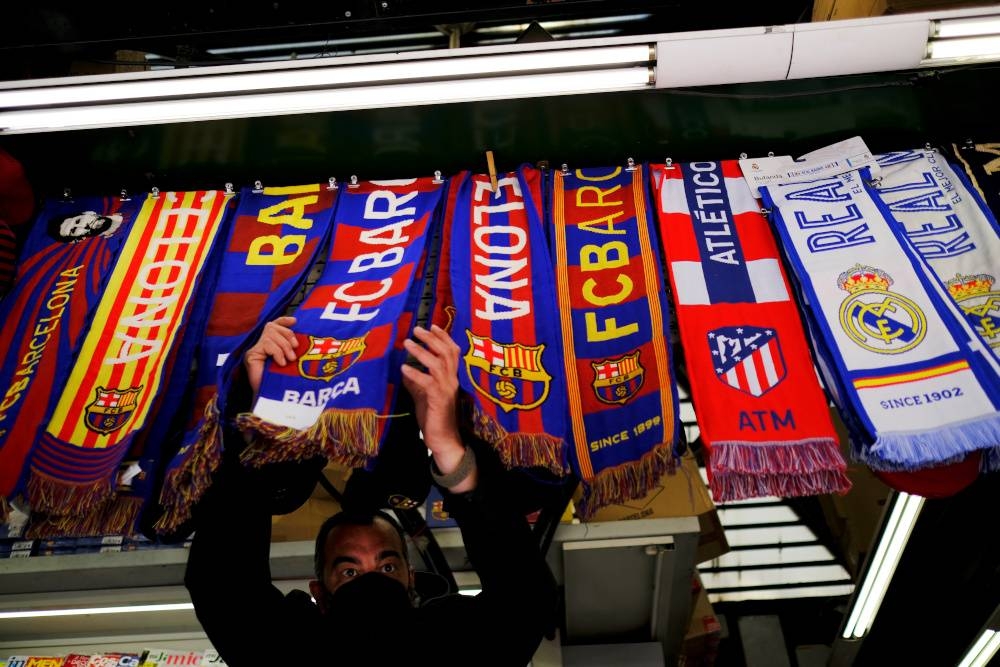 Atletico Madrid, Real Madrid and Barcelona scarves are displayed inside a store at Las Ramblas in Barcelona April 19, 2021. — Reuters pic

MADRID, Oct 9 — The main advocates of the Super League are not giving up.

Real Madrid president Florentino Perez, defended the project last Sunday and was followed by his Juventus counterpart Andrea Agnelli and then Barcelona chief Joan Laporta. A court decision in 2023 will be crucial in determining the project’s future.

“There are no football clubs among the ten richest entities in the world, we must be doing something very wrong in old Europe,” Perez explained.

Perez led a group of 12 major European clubs into the Super League project in April 2021 but it vanished a few days after it was announced after pressure from fans and authorities.

The only clubs that have tried to keep alive a league that would be direct competition for the Champions League are Real Madrid, Barcelona and Juventus.

“What is the point of depriving the fans of the big matches? Nadal and Federer met 40 times. Nadal and Djokovic, 59, is it boring? Liverpool and Real Madrid have faced nine times in 67 years,” he told the Madrid’s members assembly.

The Super League project came back to life in July, when litigation for an alleged abuse of a dominant position by Uefa was brought to the European Union Court of Justice, at the request of a Madrid judge to whom the Super League chiefs turned.

“Once again he has shown that his idea is to close everything off, without games against smaller teams,” he told a news conference in Rome.

On Thursday, in a letter to shareholders, Agnelli, reaffirmed his “commitment” to the project and proposed “establishing a direct link with sponsors who dare to take business risks, and control of economic resources.”

On the same day, Barcelona presented their accounts and Eduard Romeu, their financial vice-president, said “considering the Super League again would be positive.”

That was followed by a Laporta interview with Sonora, reported by Marca, on Sunday.

“A Super League would be an improved Champions League, with a better format, it would surely be the most attractive competition in the world,” said the Barcelona president.

However, Laporta said he would prefer not to have a closed format for the competition. “We have to have an open Super League, where there’s meritocracy,” he said.

“I think that the big clubs always playing each other would be tiring,” he added. “Those who like football among us, would end up tired. It’s healthy and beautiful that a smaller team can beat a bigger team.

“To back the underdog is very nice. You see a Euros won by Greece, and it’s beautiful. And when Leicester won (the Premier League) in England it was special.”

Opponents of the project have also spoken out.

On Friday, Uefa and the European Commission announced the renewal of their cooperation agreement which “aims to use European football as a force for positive change” until 2025.

To counter the Super League, Uefa announced a sweeping overhaul of the Champions League in May to start in 2024, with 36 teams instead of 32 and an eight-match mini-championship instead of the traditional group stage.

“Sales of the new format in the US are up 150 per cent. In the UK and France, not so much. It shows that the new format is very successful even before it starts,” said Paris Saint-Germain president Nasser Al-Khelaifi, one of the big European clubs that was not in the initial Super League agreement.

“Football must develop but in a way that respects all clubs – small, medium and large,” added Al-Khelaifi, who is also president of the European Club Association (ECA) and vice-president of Uefa.

The judicial process continues, which may be key in the conflict’s ultimate resolution. The final decision is expected near the beginning of 2023. — AFP