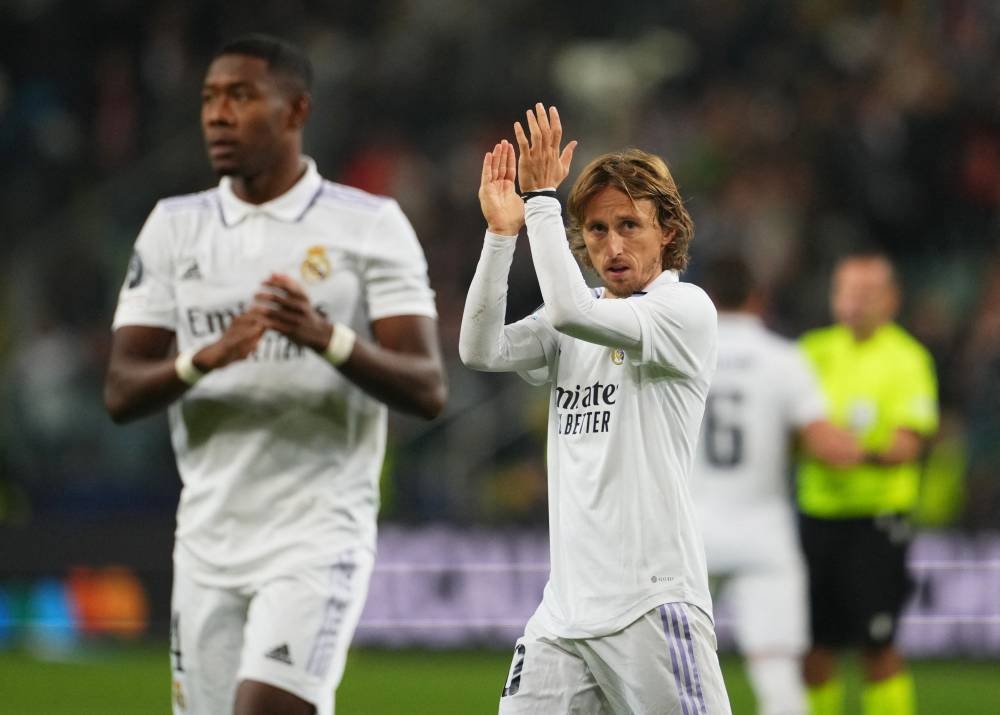 PARIS, Oct 12 — Real Madrid and Manchester City both found the going tough in the Champions League group stage on Tuesday night but battled through to draws that were enough to qualify for the knockout stages.

Paris Saint-Germain and Benfica also moved closer to the last 16 with a draw at Parc des Princes, after Maccabi Haifa had earlier upset Juventus in the same group.

On a bad night for Italian titans, AC Milan played almost the whole match with 10 men as they lost at home to Chelsea.

Pep Guardiola had rested several starters, including Erling Haaland, with an eye to the weekend’s meeting with Liverpool, and his team failed to score for the first time in 24 games, but the coach was content.

“To play one hour like that is tough. The players gave absolutely everything,” Guardiola said.

Neither Copenhagen nor Sevilla has won a game yet in Group G and when the Spaniards drew 1-1 in Dortmund in the later match, it ensured Manchester City would advance.

Carlo Ancelotti, the Real Madrid coach, also had an eye on a big upcoming league game, the Clasico against Barcelona on Sunday, and rested several starters against Shakhtar Donetsk in Warsaw.

They almost paid. Oleksandr Zubkov gave the Ukrainian club the lead at the start of the second half.

The game had entered the last of five minutes added time when Antonio Rudiger leapt to reach a long ball forward and got to it just before goalie Anatoliy Trubin.

As the two men fell to the ground bleeding, the ball went in on a post to secure Real a 1-1 draw and a last 16 spot.

“We did not play well, but this team never gives up,” Ancelotti said. “We are in the last 16, on a night that looked bad.”

RB Leipzig climbed to second in Group F, four points behind Real, with a 2-0 win over Celtic in Glasgow.

Kylian Mbappe scored from the penalty spot but Paris Saint-Germain were held to a 1-1 draw by Benfica in a game overshadowed by reports claiming the France star is so unhappy at the club he wants to leave in January.

PSG’s football advisor took the unusual step of speaking to television just before the kickoff to deny reports Mbappe wanted to leave.

“I am with Kylian Mbappe every day and he has never spoken to me about leaving in January,” said Luis Campos.

Joao Mario levelled from the penalty spot for Benfica just after the hour mark.

‘We must be ashamed’

“Agnelli is right when he says we must be ashamed,” said Massimiliano Allegri.

AC Milan started well against Chelsea, but the game turned when Fikayo Tomori fouled his former Chelsea youth team-mate in the 18th minute

Tomori was sent off and Jorginho converted the penalty. Pierre-Emerick Aubameyang added a second.

“I definitely don’t think the referee has had one of his better evenings,” said Milan coach Stefano Pioli.

Graham Potter, the Chelsea manager, seemed less than convinced by the red card.

“It was a big moment, we still felt that we could do enough with 11 v 11 but the referee made a decision and we have to get on with it,” he said.

Chelsea overtook Salzburg at the top of Group E after the Austrians drew 1-1 against Dinamo Zagreb in Croatia. — AFP