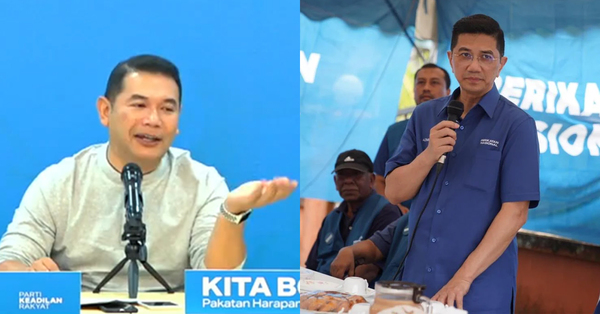 PKR deputy president Rafizi Ramli has been slammed for dressing down a journalist after realising that he works for MalaysiaNow, which the politician claimed is a mouthpiece of Datuk Seri Mohamed Azmin Ali

The incident happened during a Pakatan Harapan (PH) press conference on Wednesday, 9 November,

Rafizi dismissed and reprimanded the journalist when the latter asked a third question.

Prior to that, the first question he asked Rafizi was why he has millions of ringgit worth of wealth generated from the non-profit think tank he runs, Invoke, while his second question was why Rafizi did not distribute shares of Invoke to his employees despite promising so in the past.

The questions came after the PKR leader declared his assets in compliance with his party’s order to show voters that they are not corrupt. Since then, caretaker Special Functions Minister Dr Abdul Latiff Ahmad has been questioning Rafizi’s wealth.

In response to the journalist, Rafizi answered the first two questions by explaining various corporate laws, business strategies, processes, and bureaucracies that led to him making those business decisions at Invoke.

While answering, Rafizi took a swipe at Latiff, who is not going to defend his Mersing parliament seat, for scrutinising his private company, saying those questions are ‘businesses 101’, expressing his disbelief that a minister does not know how a company is run.

“Those questions are questions from students in school, and they should not have come from a minister,” said the PKR deputy president

“Especially a minister who runs a shell company that receives over RM200 million from other entities associated with it.”

“I want to make sarcastic remarks whenever I want to answer (these questions) from Latiff. These people don’t understand any of these because they all run exploitative businesses.”

“Instead of creating a business with value, they only invest a few ringgit into their company, and then they use their connections to get projects. When they receive projects, subcontractors are the ones that put in the money (to complete the projects) and they just make the profits out of the arrangement.”

“That is why while it’s fun to entertain people like Latiff, it is a total waste of time. He is making a fool of himself when he poses those questions at me.”

Rafizi said he does not think Latiff knows anything he just explained, adding that the reporters at the press conference might be confused, too.

He then suggested everyone study how stock option works and various business processes.

After 10 minutes of answering the first two questions, the journalist then asked why Rafizi asked for public donations in 2018 for a defamation case

“Hang on. May I know which media are you (from)?” Rafizi asked the journalist, to which the latter answered MalaysiaNow.

“Sorry, I am not going to entertain. Whatever I have to address, I will address it on my blog and you can go take it from there.”

He said he was curious how the journalist could train his gun at him when the topic being discussed at the press conference was a shady RM2 billion government project, saying that the series of questions was unfair to other journalists in the hall.

At this point, Rafizi appeared annoyed by the journalist’s insistence on asking about his RM2 million wealth at the age of 30, saying, “I just explained it just now about shared capital.”

“You don’t get it, do you? I have already answered your third question. Do you get it?”

Rafizi then waited for the journalist to answer what he understood from his explanation.

The press conference was silent as the journalist tried to defend himself without speaking through a microphone.

Following the press conference, a short clip of Rafizi reprimanding the journalist made the rounds on Twitter

Disagreeing with how Rafizi treated the journalist is another fellow journalist, Hadi Azmi.

“The subject matter is clearly beyond the depth of general news or political reporters, myself included,” he said.

“No one [needs] to be dressed down like that, regardless of who we write for.”

Hadi told SAYS that the situation would have been very different if a financially well-versed reporter had been sent there instead.

At the end of the day it’s about the readers: we are taught not to write unless we understand.

Meanwhile, @ainur_hassim said that professionalism has to come from both parties, contending that the MalaysiaNow journalist had asked the questions three times.

Professionalism must come from both ways. The journo asked for the third times pushing questions that1. Not even the subject matter of the PC2. Has been explained twice by Rafizi3. Not thoroughly checked prior to PC Wartawan cakap faham, tapi tanya agian and again. https://t.co/fdwxqPm3Nn

You can watch the segment of the press conference from the 1:25:46-minute mark: