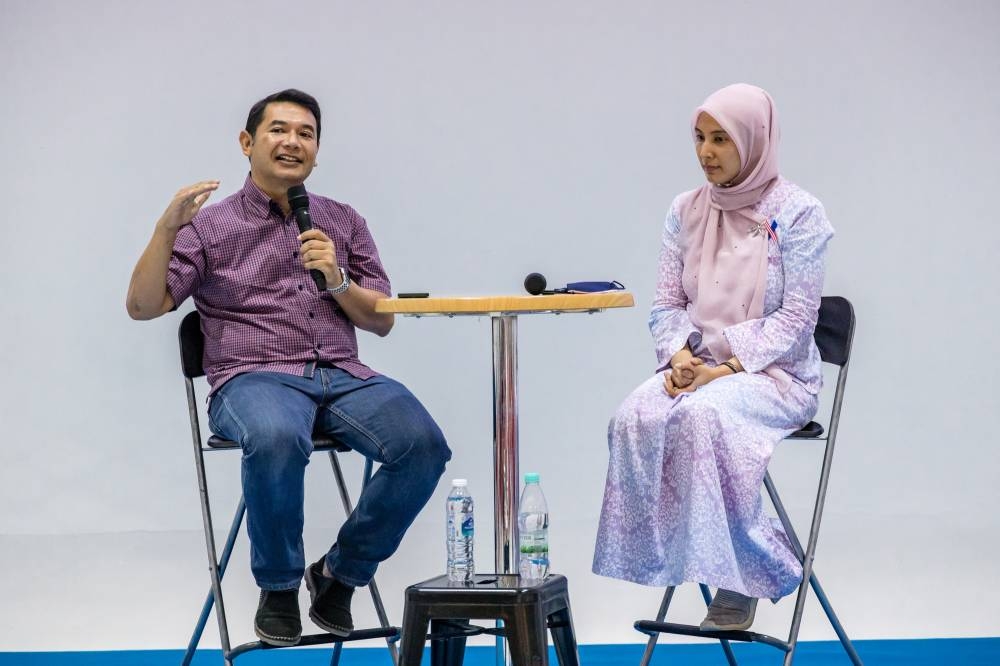 Speaking at a townhall event for youths here with PKR vice-president Nurul Izzah Anwar, Rafizi said GST should not be imposed without fixing the corruption problem in Malaysia first.

Rafizi cautioned against trying to fix wealth inequality in Malaysia by imposing taxes to redistribute the money, pointing out that such a method has not worked in the 1970s, where it nearly led to a collapse in the Western world where the government taxed and gave the money out but it was never enough as there was hyperinflation and unemployment.

Rafizi said a good taxation policy will be aimed at diverting the state’s resources and private resources to the most productive sector that would have the best effect of lifting up the country.

Saying the type of wealth inequality that Malaysia has to fight are those based on corruption, Rafizi said once those have been settled, it would hopefully create a conducive environment for people to work hard and with a taxation policy that does not penalise them while also providing a social safety net — such as education, healthcare, facilities for the elderly and the most vulnerable.

Not time for CGT

Rafizi noted that Malaysia’s stock market is not doing well now with billions of equity wiped out from local companies and amid impacts from the US interest rate hikes.

He said introducing capital gains tax or taxing profits gained from selling shares would make Malaysia’s market “a lot less attractive” and trigger another round of capital outflow.

“So it’s not against CGT per se, it’s the timing of CGT now,” he said, noting that Malaysia already imposes CGT on the sale of properties in the form of the real property gains tax (RPGT) but has not imposed CGT on shares selling.

“EPF. Tabung Haji. Khazanah. You put in CGT now, their profits drop, it’s cyclical. So we have structural issues with the market, the fact that shares, most of it are heavily weighted by GLICs,” he said.

Once such structural problems have been resolved and Malaysia has brought up the attractiveness of its companies and stock exchange to a certain level, Rafizi said CGT may then be feasible where it will reduce Malaysia’s competitiveness slightly but still attract investors as they will feel the country has future and growth.

Rafizi noted the budget deficit that the Malaysian government was at where it was spending more than it earns, and that Malaysia was at the “tail end” of its economic system which can no longer sustain the same rate of spending as before.

“So we have no choice. Unless we reform, we do something, the degradation in terms of everything — quality of life, salary — will be a lot more severe from one year to another. Because that’s how society is, if you condone and allow inefficiencies, corruption, the wrong people who don’t have penchant for getting things right to lead, basically it will lead to the collapse of society,” he said.

When met by reporters, Rafizi noted Malaysia had survived in the past decades on an economy built on natural resources such as petroleum, palm oil and timber and had been able to be attractive to investors alongside Singapore in the region in the 1980s and 1990s.

“But things have changed, everyone else now is more attractive than us, money is going out, people are not coming in, people are leaving, so if we still exhaust and we are still spending like we are — without addressing the structural economic issues, which is how do we create more value, how do we export services that is not just domestic but also regional — it comes a point when we can no longer do that.

“To me, my view is the root cause of this is the lack of creativity and innovation and risk-taking in our society, and then if you go deeper into what other root causes for that, it’s partly corruption.

“So to me, even an acknowledgment that we are falling behind in terms of creativity, innovation, entrepreneurship and risk-taking in our society, I think that will get the investors perked up, because for once, Malaysian government actually admits we have a problem,” he said, expressing his hope that there would be then a multi-pronged solution such as via education.

Speaking to reporters after the townhall event, Rafizi reiterated his proposal of having a royal commission of enquiry to introduce structural and systematic changes that could help prevent corruption in contracts given out by the defence ministry to buy equipment.

“I think we need a royal commission to overhaul the whole of defence procurement and also to look at the strategic way forward because it is tricky,” he said, pointing out the need to get to the bottom of the littoral combat ships (LCS) supply scandal and to avoid a repeat of such problems with multi-billion ringgit defence contracts.

Pointing out the long gestation period for defence procurement projects that could take up to 10 years, Rafizi said any problems would just get buried in bureaucracy as people would not have the stamina to really monitor and follow the project and that it would then erupt as an issue years later.

“That’s why I never agreed on just RCI on LCS, because it doesn’t solve the problem, it’s water under the bridge. And the problem in LCS, the fraud and everything, there is enough evidence to prosecute all these people with the current law, why do we need to do RCI? That’s why you notice I never mentioned RCI on LCS, this one is a matter of MACC or AG just taking action on all these people.”

Rafizi said defence contracts were now worth billions of ringgit and more than in past years, and that this was why defence contracts have become the focus of those who allegedly “know they will always be able to hide behind national security”.

Earlier during the townhall, Rafizi noted that defence is an important issue for Malaysia as it is in the precarious territory such as having disputed territories in the South China Sea and threats from pirates in Sabah, but pointed out that the defence ministry has become a place to steal money or where money is wasted as wrongdoers could hide behind the reason of national security.