PSA: What To Do In Case Of A Crowd Crush This Concert Season 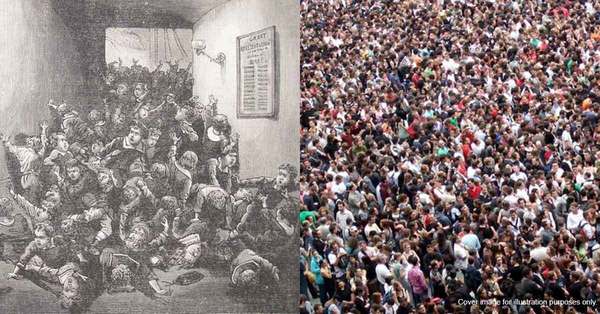 And while as fun as these concerts can be, it’s equally important to stay safe, considering the recent tragedy that took place in Itaewon where 153 were killed due to a crowd crush incident.

In a recent Twitter thread with over 150,000 retweets and 360,000 likes, Twitter user @belugasong informs everyone on what to do in case of a crowd crush, such as knowing how to look out for the crowd density.

Let’s review the 12 things in the Twitter thread that we should remember when we’re attending high-density events:

1. When entering a venue, make note of where the exits are

Image for illustration purposes only.
Image via Tarik Haiga/Unsplash

In a crowded large-scale event like concerts or festivals, it’s best to make note of where the emergency exits are. In high-density events, the main exit may not be the most viable option as everyone will go straight for it in case of emergency.

2. Learn how to watch crowd density

Image via Tess Safe and Trained

Once the crowd density reaches six people or more per square meter, you are at a high risk of being in the middle of a crowd crush.

Crowd crush fatalities often occur in small, tight spaces like alleyways, moshpits, or exit hallways of venues. To prevent this, it’s good to avoid moshpits or leave early before the event ends.

Crowd crush usually happen in events that are loud, hence people outside the crush are not aware of what’s happening. Get to a higher place where you can alert the security and event organisers to stop the music and inform eventgoers on what’s happening.

5. Make space around your chest

Image via Art of Manliness

If you find yourself stuck in the crowd and its density is increasing, make space around your chest with your arms. This leaves space for you to breathe and prevent yourself from being squeezed into suffocation.

6. Do not remove your backpack

Image for illustration purposes only.
Image via Luis Quintero/Unsplash

If you bring a backpack for your essentials, it may be your first instinct to take it off and put it on the floor to make space. However, this can be very dangerous as it may cause other people to trip over your backpack and cause a stampede.

As soon as the crowd density reaches eight to nine people per square meter, those among the crowd are unable to move freely and the group will begin to behave like a liquid. If you find yourself among them, you may feel like you’re being moved in different directions, but it’s important that you don’t fight it.

8. Do not scream or push

Do not panic. If you start being panicked, hostile, or inconsiderate of those around you, it will cause a chain reaction. Pushing one person can cause more people to start pushing as well. Instead of pushing and panicking, it’s best for you to keep calm and move with the crowd.

Image for illustration purposes only.
Image via PBS

Try to stay upright, as once you fall down, you may not be able to get back up again in a high-density crowd. People may fall onto you or climb on top of you within the crowd crush. Falling down is very dangerous to you and others around you.

Image for illustration purposes only.
Image via Nicholas Green/Unsplash

Image for illustration purposes only.
Image via BBC

A lot of people end up suffocating when they find themselves pushed against solid objects like floors, barriers, fences, or walls. Avoid from being trapped against walls to increase your chances of survival.

11. Put your safety first before helping others

Assess the risks before helping someone. If someone is falling down and you’re in the position and have the ability to help, then it’s perfectly okay to lend a helping hand. However, if you’re in an unstable position and someone is pulling on you to try and get up, it could cause both of you to fall down, hence putting your life in danger.

Image for illustration purposes only.
Image via Austin Kehmeier/Unsplash

12. If the crowd crush subsides and you’re okay, volunteer and help the victims by doing cardiopulmonary resuscitation (CPR)

Check if someone is unresponsive before doing a CPR on them by checking their breathing, looking for signs of chest movement or air coming out of their nostrils. Some victims may not need CPR if they are responsive.

Here’s a step-by-step guide on how to carry out CPR on someone:

Interlock both your hands together (assuming that the eventgoers are all adults, as position may be different if you’re performing CPR on a child) and press on the sternum (or the breastbone between the nipples).

Apply a lot of pressure, as CPR requires force and an effective CPR has to be 5cm into their chest.

Push into their chest two times per second.

Do not stop even if you hear a crack, as it is a normal occurence when you’re resuscitating someone.

If you’re still unclear on how to do CPR, watch a tutorial video below:

WHAT TO DO IN A CROWD CRUSH – an informational thread in light of the Itaewon-don Seoul tragedyEven if you think this will never apply to you, taking a moment to learn what to do in this situation could save your life and the lives of those around you. pic.twitter.com/Z2kv9ScjTb

While keeping this in mind, here are all the artistes that will be coming to Malaysia for their world tour: