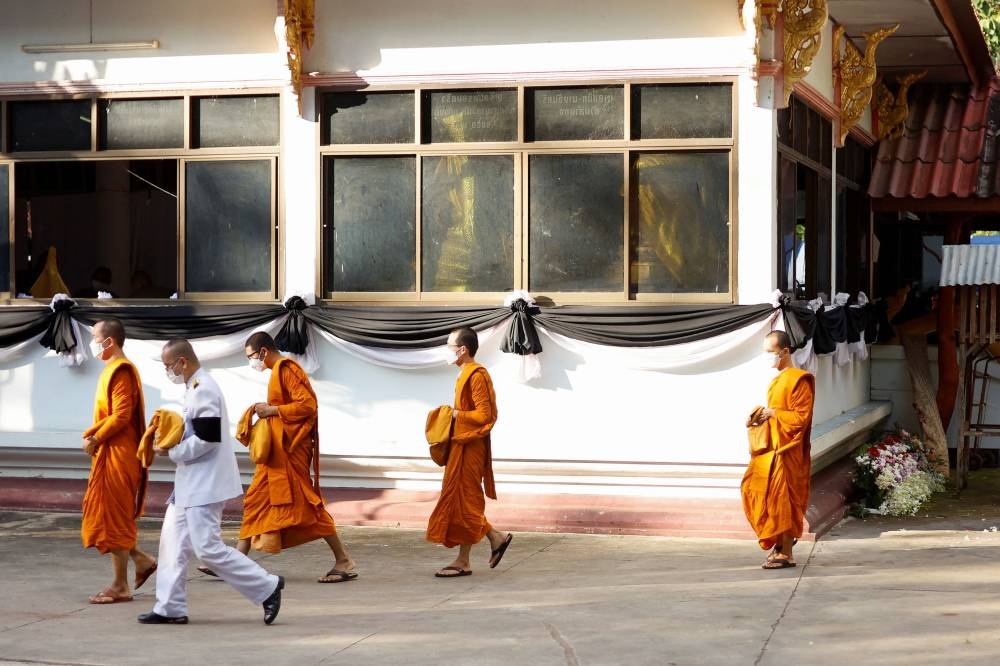 UTHAI SAWAN, Thailand, Oct 8 — Hundreds gathered in temples in northeast Thailand on Saturday, offering candles, toys and prayers to mark the lives of more than 30 mostly child victims of a gun and knife rampage that shocked the world.

Most of the children, aged 2 to 5, were slashed to death on Thursday, while adults were shot, police said in the aftermath of one of the world’s worst recent child death tolls in a massacre by a single killer.

At the Si Uthai temple in the village of Uthai Sawan, relatives and family of the dead joined a devastated community in paying respects to those slain by a former Bangkok policeman, who had been suspended from duty after admitting to using methamphetamines.

They lit candles before coffins topped with floral wreaths and framed photographs of the dead, including toddler Pattarawat Jamnongnid, dressed in a pink sports shirt, who was one of two child victims nicknamed “Captain”, after a famous actor.

On his coffin was a model dinosaur and a bottle of milk.

His mother, 40-year-old factory worker Daoreung Jamnongnid, said her only child was energetic and talkative.

At two years and 10 months, he was the youngest victim and already knew the alphabet, she said. “He was so smart. He liked to watch documentaries with his father.”

The former policeman’s last victims were his wife and child at home, before he turned his gun on himself.

Police identified the attacker as Panya Khamrap, 34, a former police sergeant who was facing trial on a drugs charge. It was not clear if Panya still used drugs, although policy say his autopsy found no evidence of drug use at the time of his death.

Asked about the killer’s motive, he told reporters it was “because of his constant stress … his family, his money and his legal cases. So he acted aggressively”.

Surachet said police were working with government to look closer at the issuance of firearms licenses in Thailand.

A woman and a girl light incense at the Wat Rat Samakee temple where coffins of victims are held, following a mass shooting in the town of Uthai Sawan, Nong Bua Lam Phu province, Thailand, October 8, 2022. — Reuters pic

Prime Minister Prayuth Chan-ocha was concerned about trauma in the community after the tragedy, his spokesperson Anucha Burapachaisri said on Saturday.

“The prime minister asked everyone to support each other and get through this brutal loss together,” Anucha said.

Three boys and two girls survived the attack and all but one of those was in hospital, police said.

King Maha Vajiralongkorn visited the hospital where the injured were taken late on Friday. He said he was deeply saddened and expressed sorrow over what was “an evil incident”.

“There are no other words to describe this feeling,” he said. “I want to give you all moral support to be strong, so that the souls of those children can have a sense of relief that their families will remain strong and be able to move forward.”

Kittisak Polprakan, 29, who witnessed the killing spree, described Panya as being calm as he emerged from the daycare centre, having slashed 22 children with a large curved blade.

“It was so quiet,” he said. “There was no noise, no screaming, nothing. It was only him who walked out.”

Police were seen questioning residents on Saturday near the home of the attacker about 3 km (2 miles) from the deadliest attack.

In front of the daycare centre, people had left toy flowers and toy trucks, in an offering to the spirits of those killed.

At the Wat Rat Samakee temple, preparations were being made for funerals, with hundreds of people dressed in black.

Earlier in the day, emotions were intense, with relatives crying as saffron-robed monks chanted.

Villagers sat on carpets with hands clasped in front a series of caskets adorned with flowers and portraits of smiling children, killed in the ex-policeman’s rampage.

A large toy sports car was placed on one of the coffins, lined with gold-coloured fabric bearing Buddhist symbols.

A woman who lost two nephews aged 3, was seen weeping as she knelt, palms pressed against one of their caskets.

Channel 8 television on Saturday livestreamed what it said was the killer’s cremation at a temple in the neighbouring province of Udon Thani, attended by only a few people.

Three monks chanted as a woman the network identified as his mother wept and said final words in front of a white coffin.

“In the next life, may you be reborn a good person, not evil,” the woman said.

A crematorium worker then lit joss sticks and said a brief prayer before igniting the flame and pushing the door shut, as smoke billowed out.

The woman, who identified herself as “grandma Duang”, had asked media to convey her sorrow about those killed.

“I’m thinking of them,” she said, her face blurred to protect her identity. “My heart is almost shattered.” — Reuters