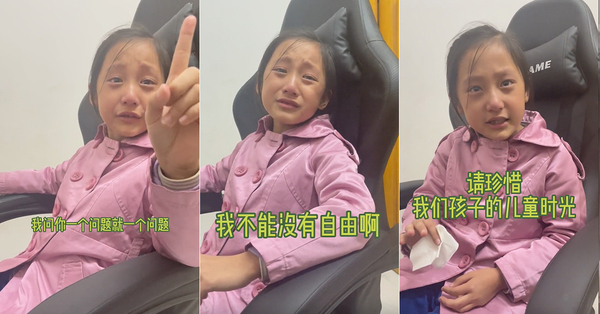 Under the account ‘???? (loosely translated to ‘a father and daughter’s bond’)’, the little girl known as Ting Ting, can be seen with tears in her eyes as she asks her father earnestly why he couldn’t give her some time off to play when she had already been studying the whole day.

In the two-minute-and-20-second video, she tells her father how much stress he is placing on her

“Respectfully, I would like to ask you a question. Is that okay?” she asks her father.

“Do I treat you badly? Am I being naughty? Is there anything I’m doing wrong? No matter what it is, you can tell me. I will change.”

She goes on, “But I need my free time. I can’t not be given some freedom. I can’t spend all my time studying. In order to study at all, I also need my rest. Does that make sense to you?”

Her father answers, “No no, you can play for a little bit, but not for too long”, to which she replies in disbelief, “I always go to bed at 9pm, do you think I’ve ever played until midnight?”

The father relents and says she can play because she has “recently” been a good girl, which sets his daughter off on another rant.

“Recently? I’ve been a good girl every single day!” she retorts while sniffling.

“I know,” she answers back again, “But whatever you are asking of me, even a robot couldn’t do it. Even if I grew eight hands, I couldn’t get any busier!”

“And you always say that you don’t put any pressure on me. You try it!”

She ends her rant with one last message, saying,”Please let children cherish our childhoods.”

The video has garnered almost three million views on Douyin, with netizens praising the girl for so eloquently expressing her feelings to her father at such a young age

Besides support from Chinese fans, the video has also been circulated on Facebook, where many netizens from across the world have also identified with the girl’s feelings.

The Douyin account shows many other videos of the father and daughter having heart-to-heart talks and carrying out daily chores together, as a single parent raising an only child.

In another video, she also confronts him about forcing his dreams on her about becoming a successful boss, when she has aspirations of her own.

“Just because you can’t do it, why does it have to be a burden that I carry?!” she cries in the video.

Since going viral, the father has also made a follow-up video telling her that her rant has gained the support of “many uncles and aunties” on the Internet, to which she maintained, “Everyone needs their rest. Even adults can’t be expected to work all the time.”

You can watch the original video on their Douyin channel here.

Meanwhile, parents and teachers have been voicing out against the difficulty of the national primary school syllabus in Malaysia: