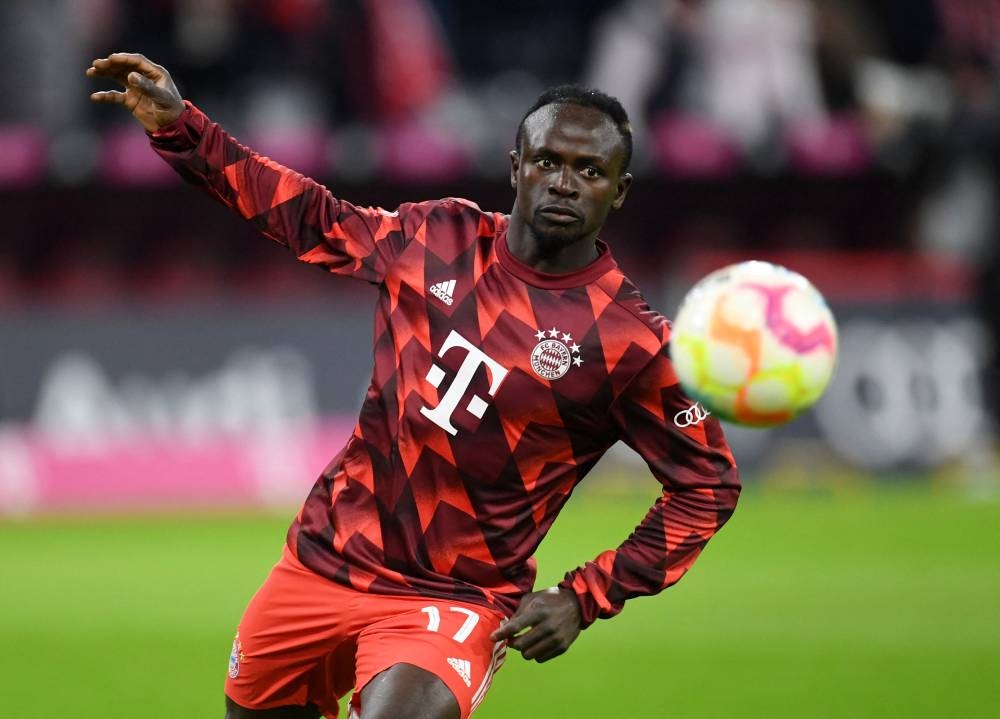 Bayern Munich’s Sadio Mane during warm up before the match against Werder Bremen at the Allianz Arena, Munich November 8, 2022. — Reuters pic

LONDON, Nov 11 — As Sadio Mane limped off early in Bayern Munich’s routine Bundesliga win over Werder Bremen on Tuesday, the nation of Senegal held its breath.

“Sadio, heart of a Lion! All my heart is with you!” Senegalese president Macky Sall tweeted with the African champions’ first game of the World Cup just 10 days away.

Mane is just the latest star name to see his presence on football’s biggest stage in Qatar threatened by injury.

The heart of France’s victorious midfield from four years ago in Russia will be missing with both N’Golo Kante and Paul Pogba ruled out.

Chelsea right-back Reece James declared he was “devastated” after a knee injury saw him left out of Gareth Southgate’s squad.

Germany will be shorn of Timo Werner, Portugal missing Diogo Jota and Uruguay left without the towering presence of Barcelona’s Ronald Araujo.

The uprooting of football’s traditional calendar to fit in a first ever mid-season World Cup has resulted in fixture congestion at club level and little time to prepare for international managers.

After the final league fixtures in England, France, Germany and Italy this weekend, there will be just seven days until the World Cup kicks off when Qatar face Ecuador.

“Right now the game against Brentford, the players’ one eye is on the World Cup,” said Manchester City manager Pep Guardiola.

“What happens if I get injured against Brentford? It’s not going to change anything in terms of winning or not winning the Premier League, and I’m going to miss the World Cup.

“I had to tell the guys to be focused a month ago, but now it’s around the corner. We play Saturday, and on Sunday they have to be with the national team.”

To make space in the schedule, the group stages of European club competitions were squeezed into two-month period.

As a result, many clubs will have played 13 times in 42 days before the World Cup break, raising the risk of injuries and draining even those who do make it to the Middle East.

“We’ve played too many games. The players are tired,” said Real Madrid boss Carlo Ancelotti after a shock 3-2 defeat to Rayo Vallecano on Monday.

The accumulated fatigue also raises questions over the quality of matches fans can expect to see at the World Cup.

“I watch many games and in this particular month it’s not easy to find attractive football because many teams, we are playing a lot,” said Tottenham’s assistant manager Cristian Stellini.

Spurs have had to struggle through without three quarters of their strikeforce in recent weeks with Richarlison, Son Heung-min and Dejan Kulusevki injured.

Son and Richarlison are set to recover in time to feature for South Korea and Brazil respectively, but England could end up being the ones who pay the price.

The Three Lions’ captain Harry Kane has started all of Tottenham’s 21 games this season.

“He was really, really tired,” said Spurs boss Antonio Conte. “I repeat he’s okay, it’s only fatigue, but it is normal because Harry played every game.”

A mid-season tournament rather than at the end of a draining campaign has previously been presented as a potential positive for England given the physicality of the Premier League.

But Southgate dismissed that theory given the schedule of the early months of the season.

“I never bought the theory it’s better for us to be playing in the middle of the season than the end because we haven’t had a problem playing at the end,” said the England manager, who led his side to the World Cup semi-finals in 2018 and the final of Euro 2020.

“I always felt that was a bit of a myth. What I do see is a really packed schedule now with a lot of players playing a lot of minutes.” — AFP