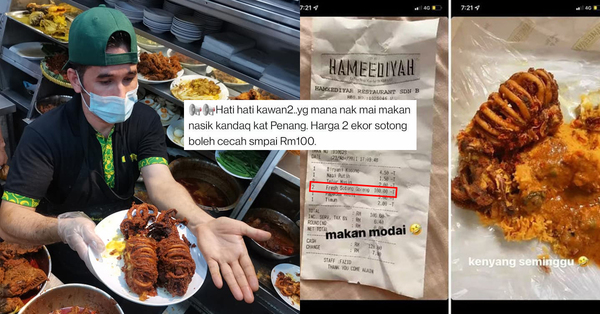 “Beware friends, especially those who want to eat nasi kandar in Penang. The price of two pieces of squid can go up to RM100,” read a Facebook post that went viral on Tuesday, 23 November.

The post shows a receipt totalling RM113 from famed nasi kandar eatery Hameediyah Restaurant — with the item ‘fresh sotong goreng’ alone costing RM100 — and a photo of the dish.

According to Malay Mail, restaurant director Muhammad Riyaaz Syed Ibrahim said he was the one who calculated the bill for that order.

“The customer ordered it for takeaway and when the prices were entered and shown on the register, the customer did not say anything and when I told them the total price, they paid for it without complaining or rejecting,” he said.

He said the customer could have easily rejected the order if they were unhappy with the price as the order was a takeaway.

The director also emphasised that the squid ordered by the customer were the larged sized ones, which cost RM50 each.

“In the picture, it looked small but in reality, it is larger than the normal squid,” he said.

New Straits Times also reported Muhammad Riyaaz as saying that they do not force their customers to buy anything and prices of all items sold in the restaurant are clearly on display, with a sotong dish being sold from RM10 to RM150.

Hameediyah Restaurant posted an apology message by the customer on their Facebook page on Tuesday night.

“I am the owner of the photo of the receipt from Hameediyah Restaurant and I would like to apologise for the confusion that has happened,” wrote the customer.

The customer said they visited the restaurant at 5pm on Tuesday and ordered two sotong goreng ‘Apollo’, priced at RM50 each. They said that they saw the cashier keying in the price of the dish and did not object to the price as they had ordered it before on a previous visit.

“I uploaded it to my Instagram story but did not mention anything about it being expensive,” they said.

“However, an individual took a screenshot of my story and uploaded it onto Facebook, and also tagged 70 others along with the accusing caption.”

“I would just like to explain here that the price was reasonable as the two pieces of fried squid I took was big, and the price was not expensive as the size was worth it. As such, anyone who misunderstood and claimed that I had said the price was expensive, that is not true at all.”

According to New Straits Times, the ministry has issued Hameediyah Restaurant a notice to explain the cost and sale price of the fried squid dish sold at the premises.

KPDNHEP director Mohd Ridzuan Ab Ghapar said the restaurant has been given two working days to respond to the notice.

“If the operator fails to respond, action can be taken under the Price Control and Anti-Profiteering Act 2021,” he said.

Several KPDNHEP officers were also spotted at the nasi kandar restaurant on Wednesday, 24 November, to record the operator’s statement regarding the issue.