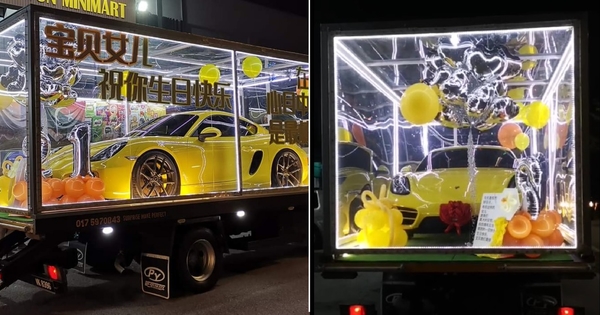 A 21-year-old woman from Johor Bahru became the talk of the town when she received a bright yellow Porsche 718 Cayman as a birthday present from her parents last week, 2 November

If the car wasn’t enough, it was presented to her in the most flashy way possible.

According to Sin Chew Daily, the Porsche was delivered to the birthday girl when she was at work in a huge plexiglass box on a truck with balloons decorating the inside. The ‘Happy Birthday’ song was also blasting from surrounding speakers, both in English and Mandarin.

Upon seeing her gift, the daughter was reportedly very shy and bashful at being presented with such a lavish gift in the eyes of the public.

Her reaction was to hide her face and hold her parents, embarrassed that onlookers and her colleagues were watching the spectacle.

According to the birthday girl’s mother, Wen, she said that her husband had always promised their daughter a sports car when she turned 21

Now that she has come of age, the 39-year-old businesswoman told reporters that since she and her husband could afford it, they wanted to fulfil their promise to their child.

But because their daughter had no specific model she wanted, the doting parents have been on the lookout for the right sports car ever since. They finally decided on the Porsche 718 Cayman, two months ago after much contemplation.

“About two months ago, we selected this sports car that we think is quite beautiful and suitable for our daughter, and [we] arranged a special way to gift it to her,” the parents said.

Because they couldn’t wait, the parents presented her with the luxury vehicle one month before her actual birthday in December.

The parents mentioned that they have two sons and two daughters, with the 21-year-old daughter being the second eldest out of her four siblings.

According to them, all four of their children receive equal treatment, and their eldest son was also given a lavish gift for his 21st birthday.

Photos and videos of the occasion have made rounds on the Internet, with many netizens commenting about the luxurious gift, many can only dream to receive

Some netizens were amused by the extravagant display of affection the parents had for their daughter, with a few hoping their significant others or parents would get them a car too.

“I don’t have a godfather or godmother, but I do have a husband. Husband, arrange something like this for me next year. Thank you,” said one Facebook user.

Another tried sweet-talking her mother, saying, “I have to tag my mother in this. Mum, my birthday is coming soon. I love you very much, can you return my love?”

Other netizens made light-hearted jokes about having luxury sports cars too, but in toy-form.

“I have one too! This is what I received today. The car is in the box,” one netizen joked.

“Even children have it [luxury vehicles] too,” said another.

In March, an expecting mother decided to gift her husband a turquoise-coloured Lamborghini as a thank you for taking good care of her:

On 30 October, a Chinese influencer crashed a LaFerrari he rented after three seconds of driving it: