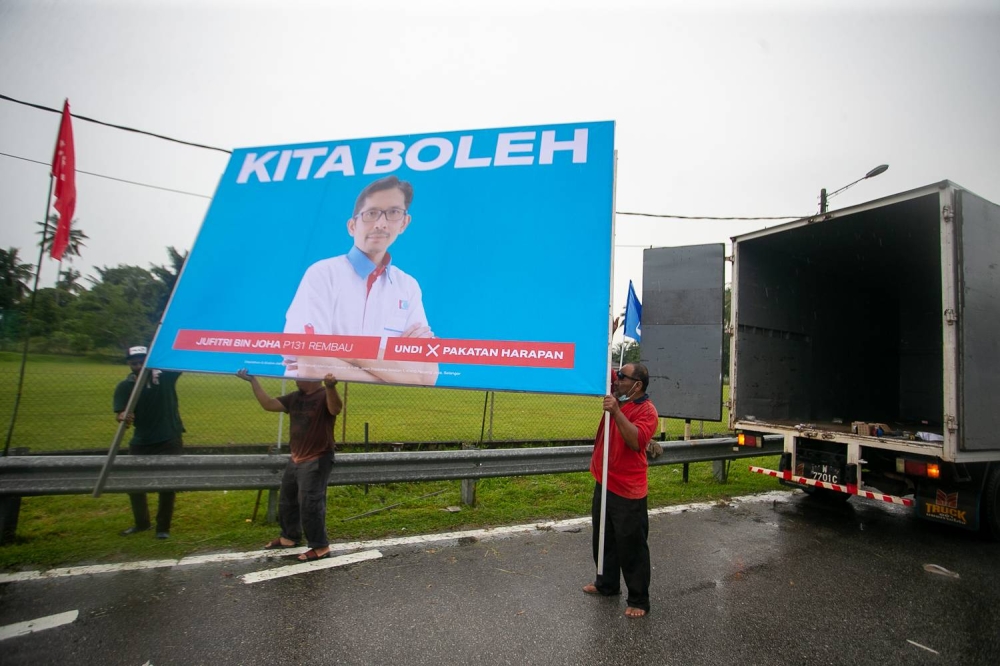 REMBAU, Nov 13 — Rembau native Jufitri Joha has a vision, and it is to establish a network of certified professional youth workers.

In fact, he said, this was something he pushed for post-2018 general election, and an Act would have been tabled in Parliament, if not for the fall of the Pakatan Harapan (PH) administration.

“The PH government was close to tabling the Act but was disrupted when the government fell apart.

“I am still fighting for this cause, and I hope to revive it if I win the election, allowing me to bring this to Parliament again,” he told Malay Mail during an interview at the Sungai Talan recreational park here.

The 43-year-old said a professional youth worker presence in the country will help to tackle youth-related issues, such as school dropouts and unemployment.

“The role of youth workers is to guide and develop youths.

“We often blame youths for being lazy or directionless. But what we don’t realise is that they feel lost due to a lack of guidance from school or parents who are too busy with work.

“This is a very common situation faced by youths today and that is one of the factors giving rise to the perception that they don’t seem to have an aim in life,” said Jufitri.

He added that much more needs to be done with youths, especially post-Covid-19, as his work on the ground in Rembau made him realise that the number of dropouts is increasing, as many do not want to further their studies or even complete secondary school.

“The situation has become dire. This is the reason why Malaysia is losing youth talents to neighbouring countries.

“One way to prevent this from happening is by bringing back soul to education.

“Many see education as a means to make a living. They are no longer interested in gaining knowledge.

“Students must be given a clear direction in life and in the career that they wish to pursue,” he said.

When asked about his views on the five-cornered contest that he faces in the general election, Jufitri said he had already anticipated it.

“I don’t see myself as an outsider, as I have been doing a lot of work on the ground for the past 20 years.

“I am just less popular as I spent some time abroad furthering my studies.

“If you ask me about the five-cornered contest here in Rembau, I think it is actually good for us (PH), as it could split the Malay vote,” he said.

The law graduate, who also has a master’s degree in community and youth work and a doctorate in youth studies, added that standing for election in Rembau is a dream come true.

“When I was offered the chance to contest here, it was like a dream come true as I had always wanted to serve the community and be close to my family at the same time.

“If I get elected, I can serve both my parents and youths back here,” he said.

Apart from youth work, Jufitri added that he hopes to inculcate in the younger generation a better understanding of culture and customs to break the perceived link to race.

“That’s what shapes a person. It is not about your race but your core identity,” he said.

Jufitri also warned against the overurbanisation of Rembau to protect its natural beauty.

“Rembau’s nature has high potential to be developed into a tourism spot. That’s why it should not be overurbanised.

“Its rich, natural identity should be preserved,” he said.

The Rembau parliamentary seat will see a five-way contest on November 19.

The parliamentary constituency comprises 66 per cent Malays and 11 per cent Chinese. Indians make up the remaining 23 per cent, along with other races.