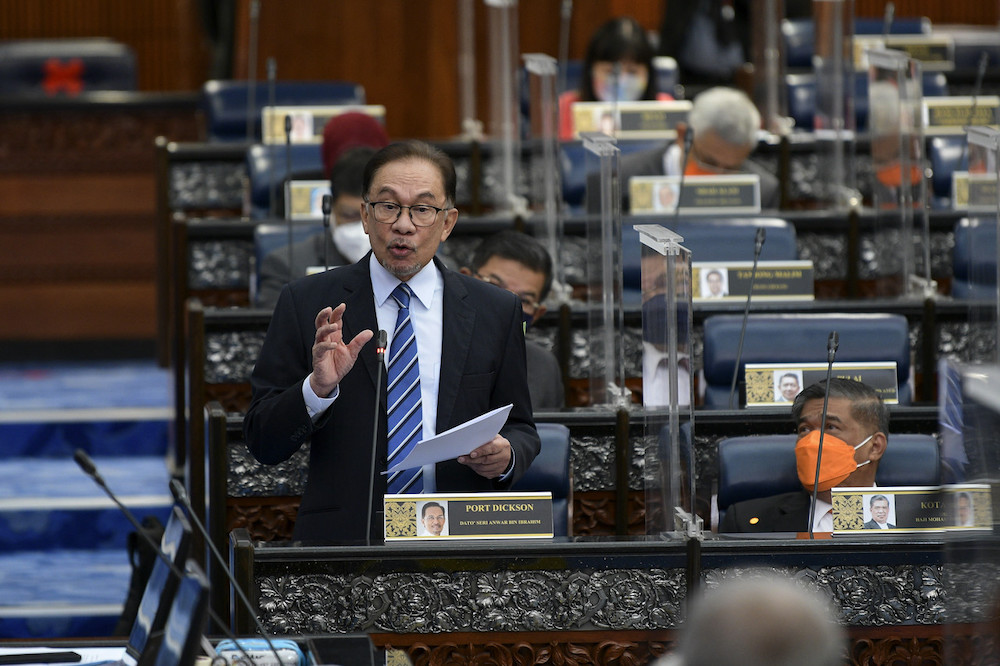 Opposition Leader Datuk Seri Anwar Ibrahim and DAP secretary-general Anthony Loke suggested more time be given to iron out the details on the government’s proposal to add a new provision 3A under Article 10 of the Federal Constitution in order to better curb power abuse through potential loopholes while not infringe on the lawmakers’ right to contest in future elections.

“We have proposed and discussed with the prime minister about our concerns when the proposed amendment 10(3A) which actually respects the fundamental provisions in the constitution of a free and democratic country, gives full recognition to the right to speak, the right to association and therefore we have proposed together, and this will be detailed by a special committee that 10 (3A) provides a specific meaning, for the purpose of us amending this constitution.

“As with the experience of the Lok Sabha, India, when there is a broad constitutional amendment, the possibility of a small majority government using the amendment to make other amendments that are contrary to the spirit may occur,” he said, adding that the proposed amendment today therefore, must be specific on issues of defection,” Anwar said during debate.

Anwar also touched on Article 48(6) of the Federal Constitution, saying that this cannot stand as it denies one who chose to step down from his or her party from contesting in elections for five years. He said that in respecting the mandate of the people, power must be returned to them, by way of elections, to decide the fate of their elected representative.

“But one of the basic principles in this amendment is to know specifically, what is meant by the Bill that will be presented. Now we don’t have the opportunity to look at the provisions in detail, although I admit, the relevant committee and the technical committee already have some information, it has been tabled by the minister, but it is not a final draft of the Bill.

“Therefore, we also propose that the next session, hopefully by the end of May, I hope the prime minister will give his consent so that this constitutional amendment is done together with the tabling of this anti-party hopping Bill, so that we know that this amendment has a specific meaning, fulfils our purpose in amending or in amending this new Bill, so that the MPs will be sure that what is meant by this constitutional amendment is by translating the party’s anti-party hopping Bill, he said, also expressing hope that the relevant parliamentary committees can meet, deliberate and find a point of unity so that the laws can be tabled and passed in the Dewan Rakyat.

Anwar said that inarguably, the negative perception from the public on politicians are being applied broadly, as the voters are vexed with politicians who participate in power struggles for money and position. He said that the damage is also felt by those who have stood firm on their principles.

In his speech, Loke said that DAP is among the main victims of party hopping, adding after 1969, when DAP first contested in the then general election, almost half of those who won on the party’s ticket had defected.

However, like Anwar, he said that the proposed amendments to the Article 10 (3A) is too wide and is “rather dangerous” as parties that come into power in the future, can make laws apart from the proposed anti-party hopping law, to restrict the freedom of MPs.

“Therefore earlier this morning, I together with the Opposition leader, Puchong MP and Kulim-Bandar Baharu MP had met with the Bera PM (Datuk Seri Ismail Sabri Yaakob) and several other leadership in the government party, and we had also agreed to find a consensus as to how to take a more careful approach for us to formulate an anti-party hopping law.

“The Bera MP also agreed that Article 10(3A) needs to be refined by inserting more specific words to restrict it only for the anti-party hopping law and does not go into other things,” he said, adding they also agreed to have 48(6) abolished.

“Because the principle is that when one wants to party hop, they can defect. If they cannot agree with their party stand, or feel that the leadership of their party is rotten, then an MP can choose to party hop, but with the condition that they resign from their post as MP or state assemblyperson to return the mandate to the people, like that said by Pandang Rengas,” he said, referring to a similar sentiment aired by Padang Rengas MP, Datuk Seri Mohamed Nazri Abdul Aziz.

“If they feel they are great and don’t need a party, they can contest as an independent but the root is that we have to return the freedom to that individual. If they feel the party did a mistake and they don’t want to follow the party any longer, it’s ok. Resign and return the mandate to the people, do a by-election. If they can convince the people, then they can be elected to sit in the Dewan Rakyat again. But the core is that Article 48(6) must be abolished,” he added.

Loke said that the group had also discussed several other matters, adding that currently, the best would be to have a select committee in Parliament, to look into the proposed amendments.

He also proposed Puchong MP Gobind Singh Deo to be appointed to the said committee and that the committee be given a one month time period to discuss the necessary laws, and have both the amendment to Article 10(3A) and the anti-party hopping law be tabled, debated and passed jointly.

Loke expressed confidence that this will return the trust of the people in the country’s democracy.