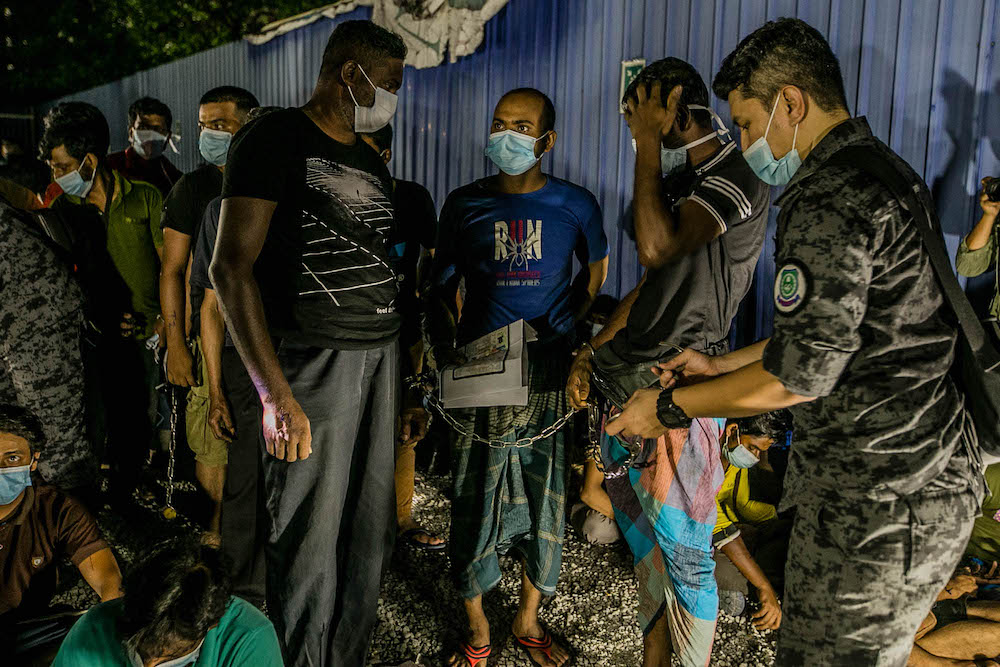 Immigration Department officers detain foreign workers during a raid at a construction site in Kuala Lumpur on March 20, 2021. — Picture by Firdaus Latif

KUALA LUMPUR, June 11 — Amid a storm of backlash towards their treatment of migrant nationals under the guise of curbing the spread of Covid-19, the Immigration Department has again managed to commit questionable acts, the latest being a post they shared on Facebook advocating anti-Rohingya sentiments.

The post shared on the Department’s official Facebook page includes a picture depicting maritime and aerial defence assets plastered against a background of stormy clouds, surrounding three uniformed personnel from the Royal Malaysia Police, the Armed Forces, and the Malaysian Maritime Enforcement Agency.

A caption on the picture written in Malay reads “Migran etnik Rohingya kedatangan anda tidak diundang”, which translates to, “Ethnic Rohingya migrants, your arrival is unwelcomed”.

In an immediate reaction, Amnesty International Malaysia (AI) chastised the poster and accompanying messages, calling it despicable, and an act of hypocrisy with opposing sentiments towards Palestinians and Rohingya, despite both facing similarly damaging persecutions in their home states.

“It is despicable to say to a community of people who have undergone ethnic cleansing, who have endured unimaginable brutality for generations that they are not only unwanted in our country, but that we will use brute force against them.

“It is also particularly grotesque coming from leaders who will crow to the international community about their concern for Palestinians one week, then in the next breath threaten violence against others who are traumatised and displaced.

“How does the Malaysian government justify that hypocrisy?” AI wrote in a statement today.

The group explained how the Rohingya community and other asylum seekers here have shared experiences of increased xenophobia and racism towards them compounded by stigmas surrounding them and the spread Covid-19.

It said endorsing such postings through social media only exacerbates the situation, an effect of which has seen suicide numbers among asylum seekers here rise.

“Make no mistake, “strategic communications” and policies like these foster a climate of hatred, violence and xenophobia — they harm lives, they punish people for trying to survive, they justify discrimination,” it said.

AI then pressured the government to come out and explain such extreme positions portrayed by the public agency.

“The Malaysian government must explain why, especially in the time of a global pandemic, they have chosen to attack people in need.

“Refugees and migrants deserve to have their humanity upheld; Malaysians deserve a government that respects the rights and dignity of all,” AI wrote.

The original post was uploaded onto the official Facebook page of the National Task Force (NTF), a multi-agency unit tasked with enforcing the country’s closed borders amid the Covid-19 pandemic.

It was accompanied by a rather uninviting and stern caption.

“Ethnic Rohingya migrants are reminded that their arrival is uninvited and was never allowed.

“Masterminds and syndicates involved will be tracked down in combating cross border crimes as well as other crimes,” read the caption on NTF’s page.

The Immigration Department sharing the post might stir allegations of them being unsympathetic towards their treatment of migrant nationals here, both documented and undocumented.

This includes being on the receiving end of recent condemnation of them spraying disinfectant on captured migrants during a recent raid in Cyberjaya.

Medical groups have also made known their disapproval towards the Immigration’s conduct of foreign nationals, saying the frequent rounding up of migrants and detaining them could further complicate the fight against Covid-19.

In February, MPs, rights groups and NGOs condemned the department after they deported 1,086 Myanmar nationals amid a junta regime in their homeland, and despite a court order suspending the repatriation exercise.

When condemned for the February deportation of Myanmar nationals, Hamzah mocked rights NGOs by tasking them to bear the cost of housing and feeding the detained migrants, even housing them in hotels if they wished instead of relying on government allocations if they are unhappy with their treatment during an April press conference.

Additionally, Deputy Home Minister I Datuk Seri Ismail Mohd Said had in April revealed that a total of 6,013 undocumented migrants were deported to their home countries in the first three months of this year by the Immigration Department.