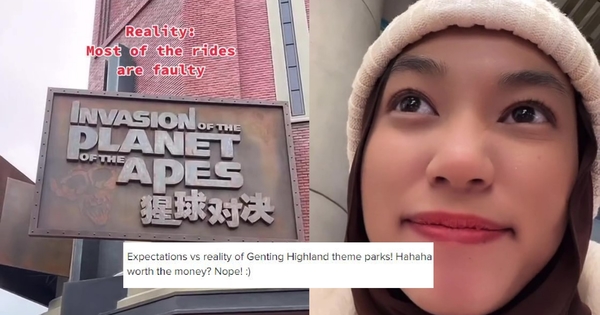 Editor’s Note: The story has been updated with a statement from Resorts World Genting.

There was much anticipation when Resorts World Genting revealed that it was opening its outdoor theme park, Genting SkyWorlds, in 2021

The USD800 million (RM3.2 billion) outdoor theme park was said to have 26 rides and attractions on its grounds, as well as intellectual properties (IP) features like Ice Age, Night at the Museum, and Planet of the Apes, among others.

On top of that, back in 2018, Genting also announced the revival of their previous indoor theme park, First World Indoor Theme Park, to Skytropolis Funland.

Image via Places and Foods

Naturally, many tourists flocked to the amusement parks once they were opened for business.

However, one tourist was rather disappointed with her experience when she visited the theme park on Sunday, 2 October

TikTok user @iffart__ documented her time at Genting SkyWorlds theme park and was disappointed to report that she was unable to go on most of the rides.

Having gone with her husband, Iffah stated that most of the attractions were closed or faulty and said that she didn’t think it was worth the price of the ticket.

She was initially eager to visit attractions such as Independence Day: Defiance and Invasion of the Planet of the Apes. However, both rides appeared to be closed, much to her frustration. To make things worse, staff closed down a ride called Rivet Town Roller while the couple were in line for it.

In the end, Iffah revealed she only managed to ride Ice Age: Expedition Thin Ice, Sid’s Rock ‘N’ Slide, and Night at the Museum: Midnight Mayhem.

In a longer video, Iffah revealed that she decided to visit the indoor theme park as well, as it had started to rain

However, she continued to be less than impressed when Skytropolis Funlands had the same issues.

Again, to Iffah’s exasperation, while most of the children’s rides were in operation, the adult attractions were again closed.

In the end, she only managed to enjoy one attraction, which was the Music Express ride, but she said that at least she had a lot of fun on it.

After having her fill, Iffah gave a longer and more detailed verdict on her experience saying that the experience was ‘okay’ but reiterated that it was not worth the price. She ended her video by telling her audience that it was at their own discretion to visit the theme park.

However, speaking with SAYS, Iffah said that she still loves Genting Highlands and will be back to give the theme parks another chance.

Many had the same experience as Iffah and expressed how disappointed they were to find out that many rides were not in operation.

Other netizens informed Iffah that Genting SkyWorlds is still in its soft launch phase, explaining why so many rides are not operational

Some said that the rides are still being tested, so patrons will just have to wait until the park fully opens to enjoy them.

Iffah later clarified in the comments section that she understood what netizens were saying when they said the park was in its soft launch phase and advised others to visit the park next year when it’s fully opened.

Speaking with SAYS, Resorts World Genting clarified that there were 15 rides available to visitors at the SkyWorlds and 11 rides operating in Skytropolis during Iffa’s visit.

However, it is stated on the Resorts World Genting website that certain attractions are ‘Coming Soon’ and have yet to be opened to the public, including rides such as Invasion of the Planet of the Apes and Mad Ramp Peak.

Certain rides have also been listed as being under maintenance during the time when Iffa was visiting.

The company also stated that some rides in the outdoor theme park would not be available to visitors when the weather is less than accommodating to prioritise the safety of visitors.

However, Resorts World Genting offers a ‘Rainy Day Guarantee‘ where visitors are entitled to a free return day ticket to be used within 12 months if their visit is interrupted by unfavourable weather.

You can watch the full video below:

Expectations vs reality of Genting Highland theme parks! Hahaha worth the money? Nope! 🙂

If you would like to visit Genting Highland’s SkyWorlds and Skytropolis theme parks, check out what attractions they have below:

Here are more theme parks and attractions in Malaysia you can check out:

Check out more of the latest #news on SAYS: