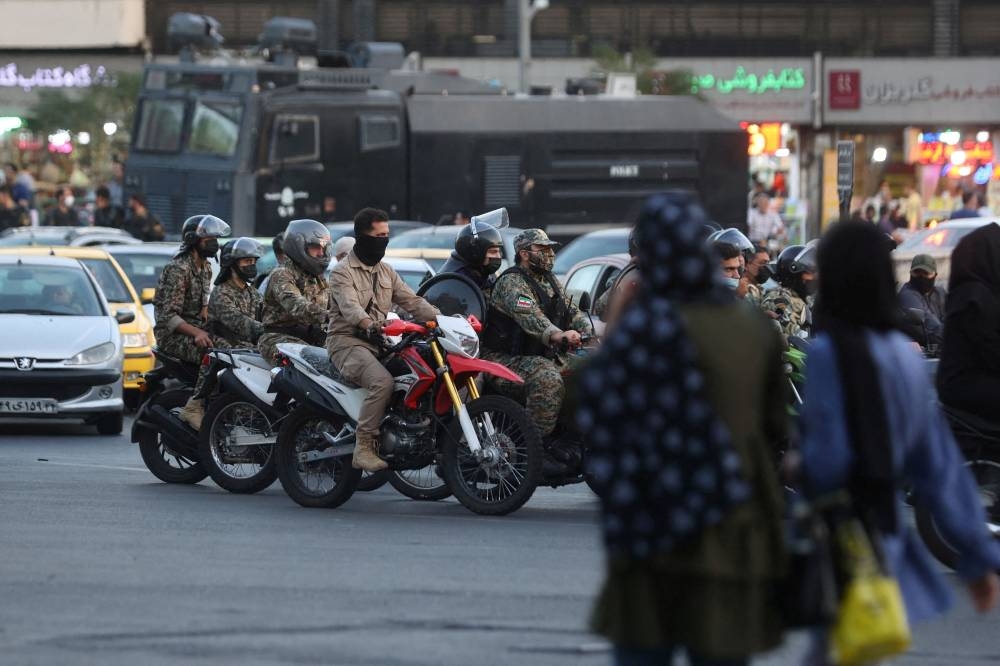 Anger flared after the 22-year-old Iranian Kurd’s death on September 16, three days after her arrest in Tehran by the notorious morality police for an alleged breach of the Islamic republic’s strict dress code for women.

Iran said on Friday an investigation found Amini had died of a longstanding illness rather than “blows” to the head, despite her family reportedly saying she had previously been healthy.

“I saw with my own eyes that blood had come from Mahsa’s ears and back of her neck,” the outlet quoted him as saying yesterday.

The women-led protests continued even as ultraconservative President Ebrahim Raisi posed for a group photograph with students at Tehran’s all-female Al-Zahra University to mark the new academic year.

In Amini’s hometown Saqez, in Kurdistan province, schoolgirls chanted “Woman, life, freedom” and marched down a street swinging headscarves in the air, in videos the Hengaw rights group said were recorded on Saturday.

Gruesome videos were widely shared online of a man who was shot dead while sitting at the wheel of his car in Sanandaj, Kurdistan’s capital.

The province’s police chief, Ali Azadi, said he was “killed by anti-revolutionary forces”.

Angry men appeared to take revenge on a member of the feared Basij militia in Sanandaj, swarming around him and beating him badly, in a widely shared video.

Another shocking video shows a young woman said to have been shot dead in Mashhad. Many on social media compared it to footage of Neda Agha Soltan, a young woman who became an enduring symbol of the opposition after being shot dead at protests in 2009.

Despite internet restrictions, protesters have adopted new tactics to get their message across.

“We are not afraid anymore. We will fight,” said a large banner placed on an overpass of Tehran’s Modares highway, according to online images verified by AFP.

The ISNA news agency reported a heavy security presence in the capital, especially near universities. It said “scattered and limited gatherings” were held in Tehran during which “some demonstrators destroyed public property”.

Street protests were also reported in Isfahan, Karaj, Shiraz and Tabriz, among other cities.

US-based campaigner and journalist Omid Memarian tweeted: “Videos coming out from Tehran indicate that there are so many protests, in every corner of the city, in small and big numbers.”

IHR said at least 95 protesters have been killed in the crackdown, which has fuelled tensions between Iran and the West, especially its arch-enemy the United States.

Citing the UK-based Baluch Activists Campaign, IHR said another 90 people had been killed in Sistan-Baluchestan province after accusations that a regional police chief had raped a teenage girl triggered unrest there.

Raisi — who in July called for the mobilisation of all state institutions to enforce hijab rules — met yesterday evening with the judiciary chief and the parliament speaker, state news agency IRNA reported.

“They stressed that Iranian society now needs unity of all strata regardless of language, religion and ethnicity to overcome the hostility and divisiveness against Iran,” IRNA said.

Iran has repeatedly accused outside forces of stirring up the protests, and last week announced that nine foreign nationals — including from France, Germany, Italy, Poland and the Netherlands — had been arrested.

On Friday, France advised its nationals visiting Iran to “leave the country as soon as possible”, citing the risk of arbitrary detention.

The Netherlands advised its citizens to avoid travelling to Iran or to leave when they can do so safely.

Nazanin Zaghari-Ratcliffe, a British-Iranian charity worker held in Tehran for six years until her release in March, called on the UK government to act over Iran’s rights abuses.

“We cannot be indifferent about what is happening in Iran,” she told Sky News. “And I think we have to hold Iran accountable.” — AFP