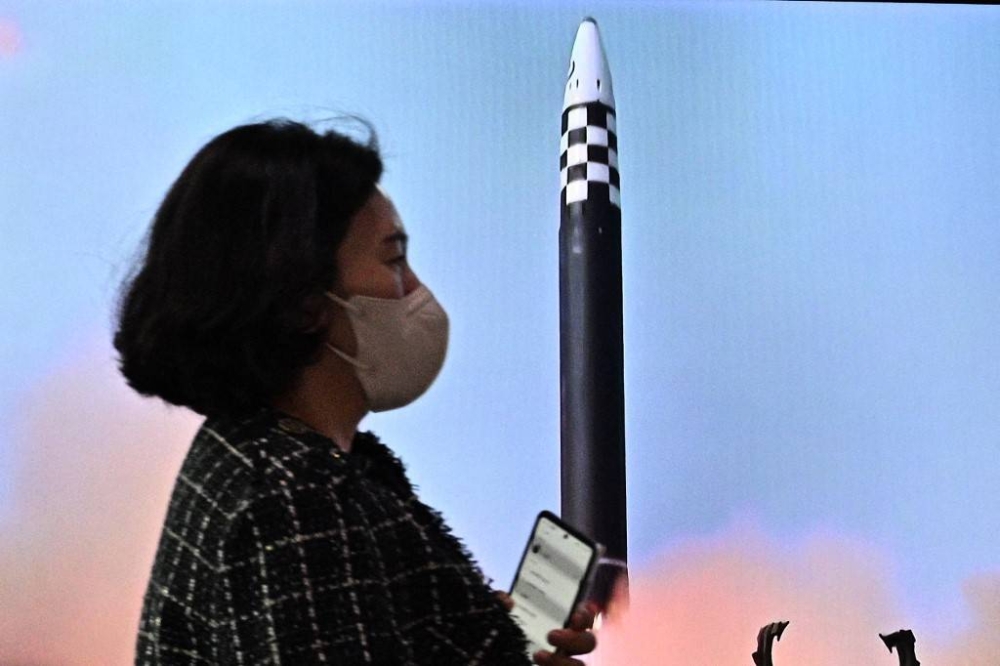 A woman walks past a television report showing a news broadcast with file footage of a North Korean missile test, at a railway station in Seoul on October 6, 2022. North Korea fired two ballistic missiles on October 6 as it justified its recent blitz of sanctions-busting tests as necessary countermeasures against joint military drills by the United States and South Korea. — AFP pic

SEOUL, Oct 9 — North Korea fired two ballistic missiles into the sea today, the South’s military said, the latest in a blitz of launches amid tensions over US-led military exercises in the region, Yonhap reported.

The South Korean military’s Joint Chiefs of Staff announced that the launch — the seventh in two weeks — came from the southeast of the country, without giving further details.

“While strengthening our monitoring and vigilance, our military is maintaining a full readiness posture in close cooperation with the United States,” the Joint Chiefs of Staff said, according to Yonhap.

North Korea yesterday had defended its recent flurry of missile tests as a legitimate counter to US military threats, following days of joint military exercises between the South, Japan and the United States.

The Japanese prime minister’s office also confirmed at least one of today’s missiles on Twitter.

Japanese Senior Vice Defense Minister Toshiro Ino said it is possible the missiles, which he said were fired just before 2:00 am (1700 GMT Saturday) and traveled 350 kilometres at a maximum altitute of 100 kilometres, were launched from submarines, according to Kyodo news agency.

The missiles, fired toward the East Sea, also known as the Sea of Japan, seem to have fallen outside Japan’s exclusive economic zone, the Japanese government said, according to Kyodo. The coast guard said it had so far not received any reports of damage to Japanese ships, national broadcaster NHK reported.

The United States military’s Indo-Pacific Command meanwhile said in a statement they were “aware of the two ballistic missile launches and are consulting closely with our allies and partners,” saying the launch shows the “destabilizing” nature of North Korea’s missile program.

“The US commitments to the defense of the Republic of Korea and Japan remain ironclad,” the statement said.

Today’s launch was the latest in a flurry that included an intermediate-range ballistic missile fired Tuesday over Japan, prompting an alert for people in affected areas underneath to take cover.

The United States redeployed the nuclear-powered aircraft carrier to waters east of South Korea as part of a broad-ranging military response to Pyongyang’s Tuesday test, which also included joint bombing and missile drills.

Exercises between South Korea and the United States concluded Saturday, according to Yonhap.

And on Thursday, the United Nations Security Council held an emergency meeting to discuss Pyongyang’s launch over Japan.

The United States called for the meeting after the firing of what officials and analysts said was a Hwasong-12 that travelled likely the longest horizontal distance of any North Korean test.

At the meeting, North Korea’s longtime ally and economic benefactor China blamed Washington for provoking the spate of launches by Kim Jong Un’s regime, with Deputy Chinese ambassador to the UN Geng Shuang accusing the United States of “poisoning the regional security environment”.

US ambassador to the UN Linda Thomas-Greenfield called for “strengthening” of existing sanctions on North Korea, something China and Russia vetoed in May.

The council has been divided on responding to Pyongyang’s nuclear ambitions for months, with Russia and China on the sympathetic side and the rest of the council pushing for punishment.

Analysts say Pyongyang has seized the opportunity of stalemate at the UN to conduct ever more provocative weapons tests.