No technology too tough for this dedicated teacher to learn 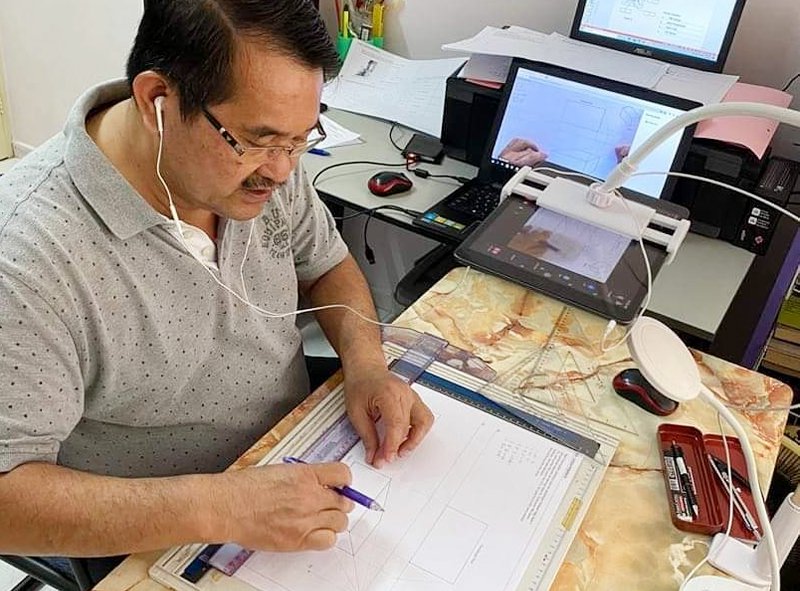 PETALING JAYA: The Covid-19 pandemic has turned the world on its head and besides massive pay cuts and job losses, many others have been forced to work remotely in efforts to contain the spread of the potentially deadly virus.

Those in the education system have not been spared and with schools remaining shut until year-end, teachers have had to face their fear of technology and learn the ropes of teaching online.

Recently, engineer Wee Cher Wei, 31, took to Facebook to share a post about his father, Wee See Heian, going to great lengths to hold an online class for his beloved students.

Cher Wei says it was his younger sister who initially took the photograph of their dad at work, commenting on how dedicated he was to his students despite knowing he would be retiring in six to seven months.

“The photograph of my father moved me deeply too and I felt inspired to share it on Facebook so others could better appreciate what teachers do.”

He said the general sentiment was that many teachers were having it easy since the Movement Control Order (MCO) in March and were receiving “free salaries”.

He said that on the contrary, teaching was not easy profession by any stretch of the imagination and he wanted people to understand that.

“Teaching is not just a job, but rather a lifetime responsibility to nurture our country’s next generation,” Cher Wei says.

Speaking to the 59-year-old himself, FMT learned that See Heian teaches technical drawing at a secondary school in Alor Setar.

He says he comes from a long line of teachers and was encouraged by his own father to become a teacher as well as it is a noble profession.

With holding online classes now being the only means to touch base with students so they can continue their lessons, See Heian says he was left with no choice but to learn new tech skills.

“The course I am teaching requires hands-on work so my son suggested I improvise by using Google Meet to make the visuals come alive.

“I had absolutely no idea how to do this but I had to learn the technology in order to teach my students,” Sei Heian says.

He explains that the rather complicating-looking setup of laptops and cables is necessary as he requires three separate devices when teaching the online classes.

The first laptop, he explains, is for the digital textbook. The second laptop allows him to speak to his students, while the tablet enables him to show them how to draw so they can better understand the topic being taught.

Passionate about his profession, Sei Heian tells FMT that his students mean a lot to him, so much so that he sees them as his own children. “Sometimes my own children are jealous,” he jokes about the close bond he has with his students.

“Whenever a student of mine walks up to me and expresses his gratitude for all the academic and life lessons I’ve imparted to them, I’m honestly so touched to the point I get goosebumps.”

Meanwhile, Cher Wei’s Facebook post has garnered over 64,000 likes (and counting) and has been shared over 25,000 times with many social media users gushing about his father’s commitment to his job.

“Yes, he’s aware that the post has gone viral and he’s overwhelmed by the response,” Cher Wei says about his dad’s reaction thus far.

“In fact, he was so surprised to see that some of his former students had commented on the post too. He is also glad that the post has inspired other teachers to continue giving their all,” chirps Cher Wei.