‘No Russians’: A taste of freedom in Kherson 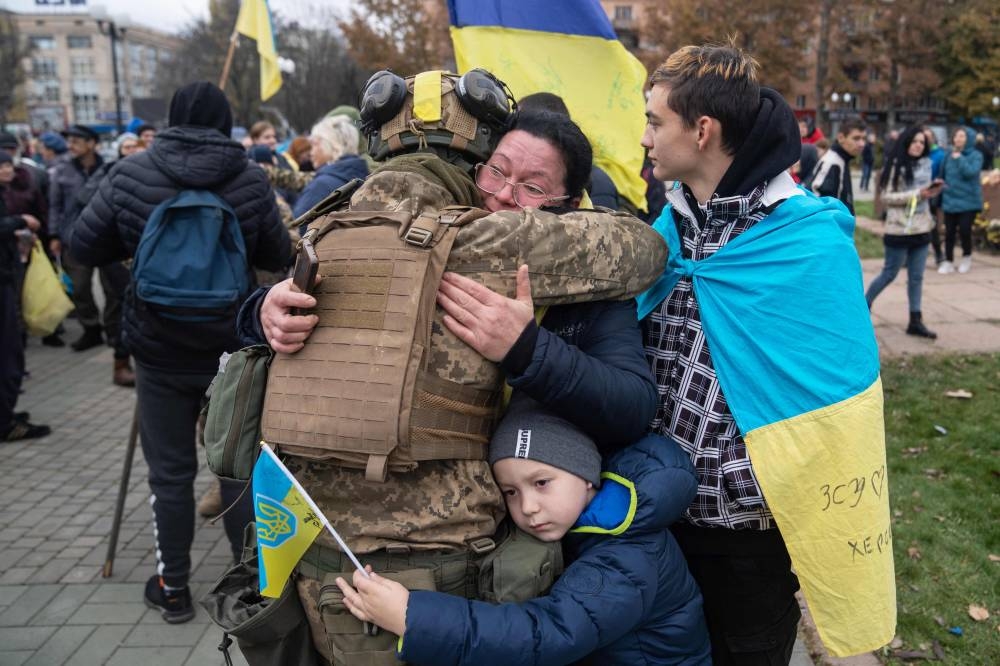 Local residents hug a Ukrainian soldier as they celebrate the liberation of Kherson, on November 13, 2022, amid Russia’s invasion of Ukraine. — AFP pic

After more than eight months under Russian occupation, residents of the city in southern Ukraine were celebrating their liberty and taking stock.

On the central Svoboda square, the national flag was flying on the roof of the regional administration building.

She had blue and yellow paint streaked across her face and a Ukrainian flag around her shoulders.

“I am so happy — I can’t express my emotions,” she told AFP.

“I couldn’t believe that we were finally liberated so quickly. It’s such a relief,” she said.

Asked what she missed most under occupation, she said “freedom” — almost shouting.

“When the Russians were here, we felt uncomfortable. We couldn’t leave the city. We couldn’t go to the shops freely,” she said. “I was afraid someone might attack me.”

Ukrainian soldiers are being greeted like celebrities in Kherson.

As soon as they arrive, people come to hug them. Children ask for their autographs, offering flags and balloons for them to sign.

The soldiers are modest and receptive.

“We’re doing our job, we’re not heroes,” said one.

‘Grateful to the people’

Another, signing flags, said: “I have feelings that I am not used to.

“We’re grateful to the people of Kherson who have waited for our arrival,” she added.

In the street in front of the square, the crowd jeered as a Russian rocket launcher passed by, towed by a Ukrainian military vehicle.

Many had come to make use of a wireless internet connection provided by Starlink satellite.

Aleksandr Murzak, 62, and Valentina Murzak, 59, had just finished speaking to their daughter over the phone.

They called earlier too, and only learned the city had been liberated when their daughter told them the news.

“I was crying,” the mother said. “She cried too.

A little further on, Andriy, 33, a philosophy student, said: “I am extremely happy we’re finally free.

“Now, we have no electricity in the city, no water, no central heating, no mobile signal, no internet connection — but we have no Russians,” he said.

“I didn’t expect it to happen so fast and easily — without street fighting… like in Mariupol,” he added.

“I am happy our city is not as ruined as others, fortunately,” he said.

There was anger among those gathered over the behaviour of Russian troops.

“They looted all the flats, destroyed the doors”, said Svetlana Vilna, 47.

“They took all the electronic equipment. They’re thieves,” she said.

She said it had felt like she was “in prison for nine months”.

“They terrorised us. They were worse than the fascists. That’s how it was,” the 25-year-old said.

At the city’s western entrance, where Russian soldiers had manned a checkpoint, young people have been repainting in yellow and blue the concrete blocks that served as shelters for the occupying soldiers.

Residents gathered on the side of the road, waving Ukrainian flags and making the sign of V for victory as cars passed.

“We want to clean up everything as soon as possible so that nothing will remind us of these beasts,” said Sergei Zatirko, 65, who lives in an apartment nearby.

“Look at all the rubbish they’ve left here. There’s never been so much. They’re just pigs.” — AFP