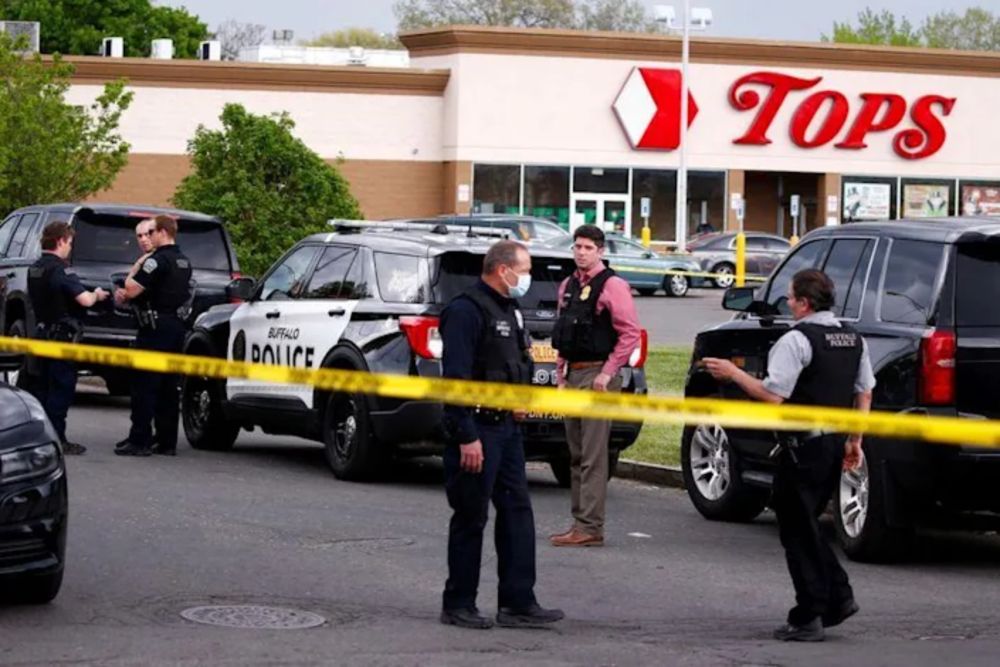 Police officers secure the scene after a shooting at TOPS supermarket in Buffalo, New York, US, May 14, 2022. — Reuters pic

BUFFALO, May 16 — An investigation into the weekend shooting of more than a dozen people at a western New York supermarket will turn today to whether authorities missed tell-tale signs and red flags left by the teenage gunman prior to his racist killing spree.

Authorities said Payton Gendron, 18, carried out an act of “racially motivated violent extremism” when he opened fire with a semi-automatic rifle on Saturday at the Tops Friendly Market in Buffalo, where 11 of the 13 wounded were Black.

“The evidence that we have uncovered so far makes no mistake. This is an absolute racist hate crime that will be prosecuted as a hate crime,” Buffalo Police Commissioner Joseph Gramaglia told reporters on Sunday.

Besides seeking a clearer understanding of the motives for Gendron’s attack, authorities will focus on what could have been done to stop him, as details of the teenager’s troubling behavior in high school and his online presence began to emerge.

Gendron figured on the radar of local law enforcement last June, when police detained him after he made a “generalized” threat at his high school, Gramaglia said.

Given a mental health evaluation at the time, he was released after 1-1/2 days.

A 180-page manifesto that circulated online, believed to have been authored by Gendron, outlined the “Great Replacement Theory”, a racist conspiracy theory that white people were being replaced by minorities in the United States and elsewhere.

Another online document appeared to have been written by Gendron sketched out a to-do list for the attack, including cleaning the gun and testing the livestream he would use to relay it on social media.

A spokesperson for the Erie County district attorney’s office declined to comment on the documents.

Gendron surrendered to police after the shooting and was charged with first-degree murder, which carries a maximum term in New York of life in prison without parole, but he has pleaded not guilty.

Authorities said Gendron drove to Buffalo from his home several hours away a day before the attack to make a “reconnaissance” on the area.

On Saturday afternoon, he drove to the grocery store, where he commenced the assault that he broadcast live on social media platform Twitch, a live video service owned by Amazon.com.

Dressed in tactical gear, Gendron opened fire with a semi-automatic rifle he had bought legally, but then modified illegally. In his car, authorities found two other guns, a rifle and a shotgun.

Speaking before a service on Sunday at the Macedonia Baptist Church, Buffalo teenager Jaylah Bell told Reuters the shooting had left him scared to go to certain places.

“This is really eye-opening,” said the 14-year-old, adding that he was down the street from the grocery store at the time of the shooting.

“I think I’ll stay closer to my parents, rather than hang out with my friends, just to feel extra safe.”

Every seat in the church was taken as people gathered in support of the victims’ families, with fans being distributed to alleviate a lack of air-conditioning.

“We are not here for another ‘kumbaya’ moment,” Rev. Julian Cook told the congregation. “Thoughts and prayers are not enough. We need sustainable movements.”

At the True Bethel Baptist Church nearby, a crowd of worshippers held a mournful service, including some family member of victims and others who had been in the store at the time of the shooting. Read full story

Among them was Charles Everhart Sr., 65, whose grandson Zaire Goodman, 20, worked there.

“He was pushing the carts back to the store and he was one of the first to get hit,” Everhart said. Though shot in the neck, Goodman survived.

The Buffalo incident follows racially motivated mass murders in recent years, such as the Atlanta spa shootings of March 2021, in which a white man killed eight people, targeting Asians, and a Pittsburgh synagogue attack in October 2018 that killed 11. Read full storyRead full story

Stephen Belongia, an FBI special agent in charge of the Buffalo field office, said the attack would be investigated both as a hate crime and as an act of “racially motivated violent extremism” under federal law.

New York Governor Kathy Hochul said she was dismayed that the suspect managed to livestream his attack on social media, which she blamed for hosting a “feeding frenzy” of violent extremist ideology.

Social media and streaming platforms such as Twitch, which said it removed the livestream within two minutes, have grappled for years with the task of controlling violent and extremist content.

“The user has been indefinitely suspended from our service, and we are taking all appropriate action, including monitoring for any accounts re-broadcasting this content,” a Twitch spokesperson said. — Reuters