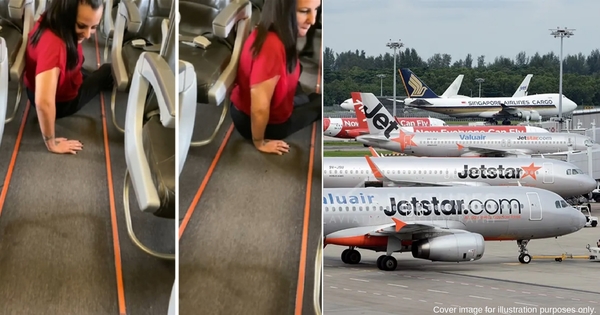 According to 7NEWS Australia, Natalie Curtis was flying with Jetstar from Singapore to Bangkok, Thailand. During boarding, Curtis was reportedly provided with an aisle wheelchair to get to her seat.

She revealed that she had brought her own wheelchair with her on her travels but it could not fit in the plane, thus having to rely on an aisle wheelchair.

However, when the plane reached the destination, the Jetstar staff informed Curtis that she will be charged for the transfer wheelchair service.

Curtis reportedly refused to pay for the service.

A typical aisle wheelchair used on airplanes to transport disabled passengers during boarding and disembarking.
Image via Wikipedia

“When we arrived (staff) were asking us to actually pay and I didn’t really comprehend it, and I’m like, ‘No, I’m not paying to be able to get off this plane’,” Curtis told 7NEWS reporters.

When the situation did not progress, she took it upon herself to get off her seat without a wheelchair and crawl down the airplane aisle.

“They all just sat around for a while and the [only] option that was left was for me to get on the floor and crawl,” the Australian said.

Curtis was traveling with her friend, Natasha Elford, who filmed the entire incident on her phone. She told reporters that the Jetstar staff had offered to carry Curtis off the plane but she felt that it would have made the situation worse and more dangerous.

Jetstar has issued an apology to Curtis, as well as offering a refund and additional compensation

According to a Jetstar spokesperson, the flight crew were informed that an aisle wheelchair would not be available for at least 40 minutes when arriving in Bangkok.

“We unreservedly apologise to Ms Curtis for her recent experience while travelling with us. We are committed to providing a safe and comfortable travel experience for all our customers, including those requiring specific assistance,” the spokesperson said in a statement.

“Regrettably, this was not the case for Ms Curtis following a miscommunication that resulted in the delay of an aisle chair being made available at the gate on arrival and we are looking into what happened as a matter of urgency,” the spokesperson added.

However, Jetstar has denied withholding an aisle wheelchair from Curtis due to a request for payment for the service.

Image for illustration purposes only.
Image via Routes Online

According to reporters, Curtis has sworn of Jetstar and will never fly with the airline company ever again

She shared her experience in a Facebook group called ‘Why we hate Jetstar‘ and said that the whole experience was “embarrassing” and she felt humiliated by what she had to go through.

“I have never felt so degraded in my life… Absolutely disgusted in the service provided,” the Queensland native wrote.

Last month, Qatar Airways stopped a Malaysian para-athlete from boarding a flight because he did not travel with a companion:

In September, a wheelchair-bound man was forced to wheel on the road after motorcyclists parked their vehicles on the wheelchair-friendly sidewalk:

In August, a wheelchair-bound elderly man and toddler were left stranded on the sidewalk after a Myvi driver parked their car on a wheelchair ramp: