Nagelsmann puts Bayern on red alert for his return to Hoffenheim 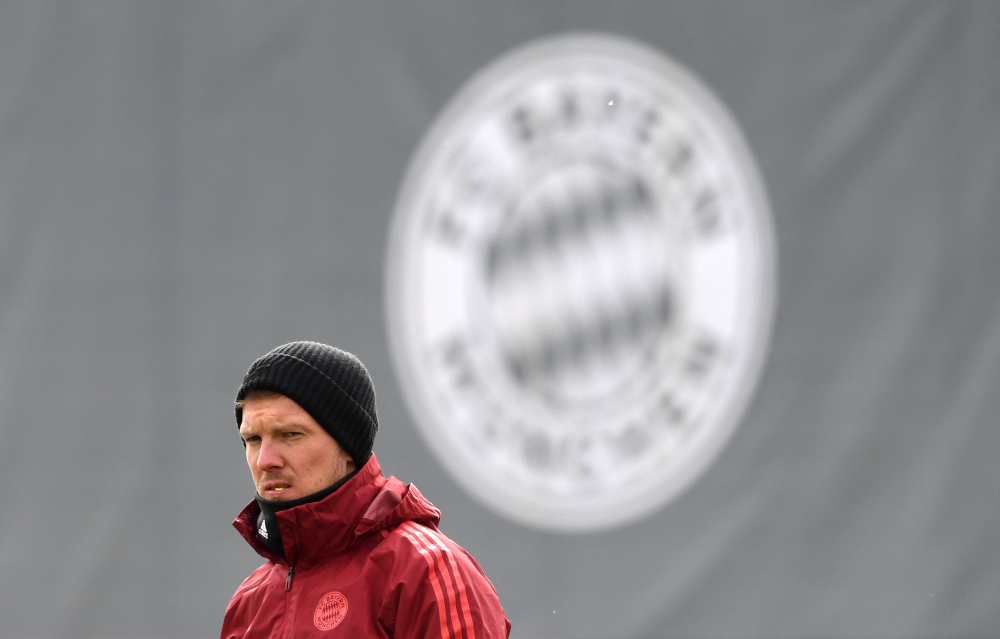 BERLIN, March 11 — Julian Nagelsmann has put his Bayern Munich side on red alert for tomorrow’s away trip to his former club Hoffenheim, who have a knack of upset home wins over the Bundesliga leaders.

Hoffenheim, who Nagelsmann coached from 2016 until 2019 after rising up through the club’s ranks, are fourth in Germany’s top flight and on a four-match winning streak.

They have won three of the last five home games against Bayern, most recently a 4-1 thumping in 2020 when Croatia striker Andrej Kramaric bagged late goals.

“We are warned,” said Nagelsmann, who described Hoffenheim as “incredibly dangerous”.

“I’m looking forward to going back,” he said.

“They’ve won their last four games, have a lot of good statistics, put in lots of crosses and intensive runs.

“After us, they have the most kilometres in the opponents’ half.”

However, Hoffenheim were soundly beaten on their last two visits to Munich, most recently in a 4-0 rout last October.

Their head coach Sebastian Hoeness, nephew of ex-Bayern president Uli Hoeness, has told his side “you can’t lose by much if you play bravely — and that’s what we intend to do”.

At the other end of the table, Borussia Moenchengladbach host Hertha Berlin tomorrow with both clubs under enormous pressure.

Gladbach coach Adi Huetter is quarantined with Covid-19 and his team is low on confidence after surrendering a two-goal lead in last weekend’s 3-2 defeat at Stuttgart.

Hertha boss Tayfun Korkut also has his back to the wall after their 4-1 thumping at home by Eintracht Frankfurt extended their winless streak in 2022 to eight games.

Hertha are third from bottom while Gladbach are only four points above them in 13th.

Things are chaotic off the pitch in the capital.

After managing director Fredi Bobic said Hertha must “take points” at Borussia Park, Korkut dryly responded yesterday that his side knows they are effectively “forbidden to lose”.

Gladbach are missing injured top-scoring midfielder Jonas Hofmann and, with Huetter sidelined, his assistant Christian Peintinger will be in charge.

Mainz have 20 cases of Covid in their squad and tomorrow’s away match at Augsburg has been postponed.

Borussia Dortmund will be without Covid cases Mats Hummels and Raphael Guerreiro for Sunday’s home game with Bielefeld while their captain Marco Reus is ill.

However, Dortmund striker Erling Haaland could return from injury having been sidelined since January.

One to watch: Manuel Neuer

Germany’s captain could claim a new record of 311 Bundesliga victories if Bayern win at Hoffenheim.

Neuer is currently level with Bayern CEO Oliver Kahn, who Neuer says is unphased by the prospect of losing his record despite having been ultra-competitive during his career.

“He’s very relaxed about it all. I think as long as I’m breaking records, it means things are going well for the team,” said Neuer, voted Fifa’s best goalkeeper in 2020.

211 — the clean sheets Neuer has kept in 458 Bundesliga appearances since his 2006 debut for former club Schalke before he joined Bayern in 2011.

23 — the goals Hertha have conceded in 2022, the worst in the Bundesliga, with Gladbach right behind them on 19.

16 — the away goals Bayern striker Robert Lewandowski has scored this season, one short of the league record held by Timo Werner (2019/20) and Jupp Heynckes (1973/74).

Fixtures (all times 1430GMT unless stated)