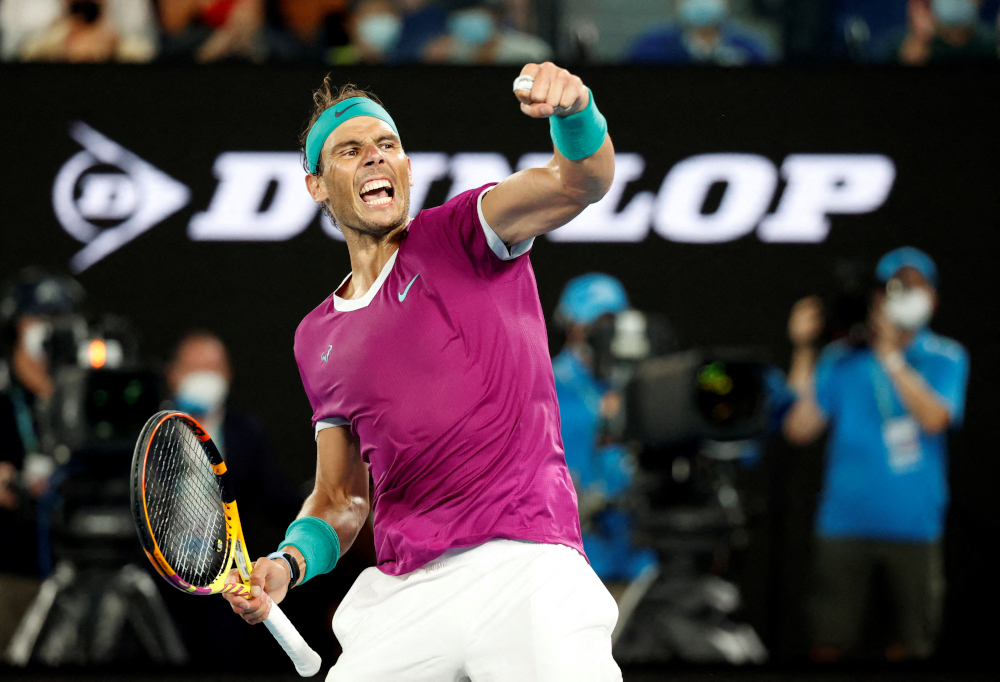 INDIAN WELLS, March 15 — Rafael Nadal pulled off another great escape Saturday, rallying from two breaks down in the third set to beat young American Sebastian Korda in the second round at Indian Wells.

As Daniil Medvedev — the man Nadal beat with an epic comeback in the Australian Open final — cruised to victory in his first match as the world’s top-ranked player, Nadal was made to work by 21-year-old Korda, ranked 38th in the world.

“Sebastian was playing some fantastic tennis. I didn’t play my best match without a doubt (but) a lot of credit to him that he played so aggressive and he put me in a lot of trouble.”

The night ended with four-time Grand Slam champion Naomi Osaka departing Stadium Court in tears after she was heckled early in a 6-0, 6-4 second-round loss to Veronika Kudermetova.

Osaka, who put athlete mental health in the spotlight during a tumultuous 2021, said it wasn’t so much the “Naomi, you suck” shout from the crowd but the fact that it reminded her of how Venus and Serena Williams were jeered at the same tournament in 2001.

“To be honest I feel like I’ve been heckled before, it didn’t really bother me,” she told the crowd after the match.

“But, like, I’ve watched a video of Venus and Serena being heckled here. If you’ve never watched it you should watch it,” Osaka added, choking back tears.

“I don’t know why, but it went into my head and it got replayed a lot.”

Osaka asked the chair umpire to intervene after the incident, to no avail, and at 0-3 down the former world number one’s emotions briefly spilled over.

She pulled herself together and even though she raised her game in the second set she couldn’t find a way past Kudermetova.

Medvedev had opened the action on Stadium Court and after saving a break point in the opening game had little trouble with 21-year-old Czech qualifier Tomas Machac, ranked 158th in the world.

The US Open champion wrapped up a 6-3, 6-2 victory in 70 minutes, although Medvedev said it “was not as easy as it seems” after he sealed the win on a third match point.

Medvedev said it was a “great feeling” to take the court as world number one, “something I’ve always dreamed of.”

Medvedev, who has never made it past the fourth round in four prior appearances, next faces France’s Gael Monfils, who beat Serbian Filip Krajinovic 6-3, 6-4.

Nadal, who won a record 21st Grand Slam at the Australian Open in January, improved his perfect season’s start to 16 straight victories with a gritty display that owed more to experience.

Korda led the third set 5-2 and twice served for the match. But he couldn’t conjure a match point as Nadal reeled off four games in a row.

“I think it’s true that probably he got a little bit more nervous,” said Nadal, who next plays Britain’s Dan Evans, a 6-2, 6-0 winner over Argentina’s Federico Coria.

Nadal was joined in the third round by rising young compatriot Carlos Alcaraz, who beat American Mackenzie McDonald 6-3, 6-3.

The 18-year-old Alcaraz, coming off a title at the Rio Open, converted five of his nine break-point chances and rallied from a break down in the second set.

Badosa had lost three prior meetings with the Czech, although all had come before the Spaniard moved into the top 10 with her Indian Wells victory in October, when a pandemic delay shifted the event from its usual March slot.