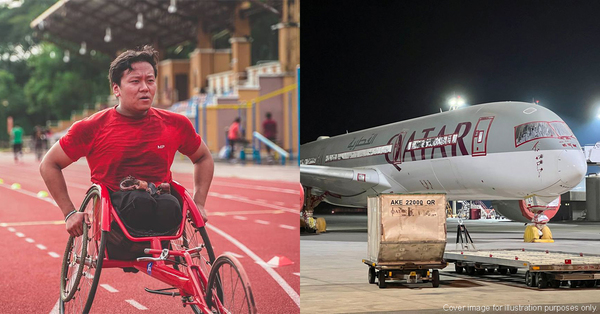 A national para-athlete has alleged that he was discriminated against by an airline manager from Qatar Airways while checking in for a flight back to Malaysia from Cairo, Egypt

Sharing his experience on Twitter, Daniel Lee wrote that a Qatar Airways manager had not allowed him to board the plane because he was a person with disability (PWD) who had requested an inflight cabin wheelchair while travelling alone.

According to Lee, the manager said it was an airline policy that any PWD who requires an inflight cabin wheelchair must have a travel companion.

However, as a fully independent wheelchair user who had travelled alone to a sports conference in Egypt, Lee said it was absurd that they would not allow him to board because they said it “may not be safe” for him without a companion.

Lee, who had represented Malaysia in the 2013 Asian Youth Para Games in wheelchair racing, detailed that, besides the discriminatory policy, the manager himself was dismissive towards him

Speaking to SAYS, Lee explained that he has osteogenesis imperfecta, commonly known as brittle bone disease. Although he can walk, he might fracture his legs while doing so, which is why he still prefers to use an inflight cabin wheelchair when moving around onboard.

Even without a travel companion, Lee said he could also manoeuvre a cabin wheelchair on his own if he needed to use the lavatory.

However, despite explaining all this to the manager, he was still not allowed onboard without a companion.

This was met with more exasperation from the para-athlete, as the manager said he would still not be allowed to board the plane without a travel companion, because, now, he was unable to ambulate independently.

“I asked the manager that, given these policies, does this mean all PWDs have no right to travel alone?” Lee wrote.

“The manager retorted, ‘Not all disabilities! Someone who is deaf can.'”

Image for illustration purposes only.
Image via SFO777

Ultimately, Lee said he was allowed on the flight after the manager held a conference call, even though the management was initially still “undecided” if he could get onboard

“The Qatar Airways manager repeated at least three times that he has denied passengers onboard before. And, after a while, I thought that I’d just say ‘Yes, I can walk,’ so that they would allow me onboard. I felt like I needed to say whatever I could in order to board my flight,” Lee shared.

The 31-year-old said he felt humiliated and disrespected as he finally boarded the flight home. However, he hopes that his experience will raise an issue about safety policies that are actually discriminatory toward PWDs.

“A lot of assumptions are made about what a PWD can or cannot do. Even after I clarified that I am perfectly capable of caring for myself, even if the cabin crew weren’t allowed to assist me, I could have used the cabin wheelchair on my own,” he said.

“I have always used cabin wheelchairs during flights and flown alone 95% of the time for almost 10 years. Mostly with Qatar at that. I’m super disappointed.”

Lee told SAYS that he has yet to make a formal complaint, but Qatar Airways has yet to respond to his social media posts.

It started with a simple question of “Can you walk on your own?”. A @qatarairways manager in Cairo airport then said their policy states that a PWD who needs inflight cabin wheelchair MUST have a travel companion. (1/14)

The PWD community continues to face poor perception and discrimination without proper awareness: