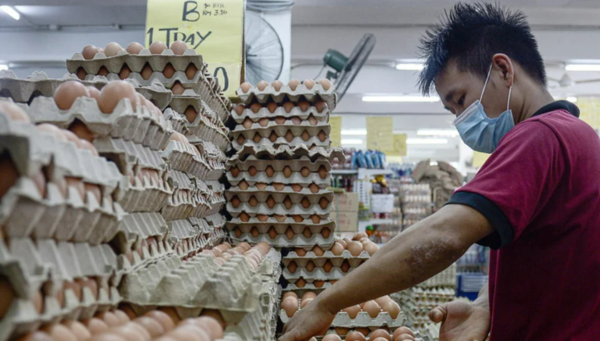 According to The Star, Federation of Livestock Farmers Associations of Malaysia (FLFAM) deputy president Lee Yoon Yea stated that the situation will not improve unless the government decides to deregulate egg prices and let the market forces take over.

The price control mechanism does not cover organically grown or kampung eggs, nor does it cover branded or “designer” eggs, which are frequently enhanced by the addition of supplements like Omega-3 fatty acids and other ingredients.

“Imported feed raw materials will cost more if the ringgit drops further against the US dollar in the near future. Farmers will face even more financial hardship due to rising egg production costs,” said Lee.

Malaysia’s currency opening price was RM 4.7 against the US dollar, which is not far from its all-time low, on Monday, 17 October.

Rising number of Malaysia currency as of 17 October.
Image via MSN

Wong Wei Cong told The Star that the prices of maize and soybean meals – the two main ingredients for chicken feed – had gone up this month.

Due to the higher production costs, Wong said he had to cut down his production from 160,000 eggs to 120,000 eggs per day in the past two years.

Wong had to cut down on egg supplies and turn down new orders because it was hard to increase production. According to the Johor-based producer, he cannot run to other big farmers for help as they, too, are facing the same problem.

“A hen usually lays one egg per day, and there are days when it won’t. Farms are not factories. It’s not like you can boost production by giving the hens more food or recover production in a single day”.

“The upcoming rainy season will also affect egg production in hens. I hope that the new administration will consider the problems facing poultry farmers and find a solution that would benefit both parties so that consumers can purchase eggs at fair prices,” expressed Wong.

Meanwhile, the Ministry of Domestic Trade and Consumer Affairs (KPDNHEP) has assured a sufficient supply of chicken eggs nationwide

According to Bernama, KPDNHEP secretary-general Datuk Azman Mohd Yusof said the ministry constantly monitors the availability of chicken eggs on the market and collaborates with several ministries.

“I have also been in contact with the Ministry of Agriculture and Food Industries (MAFI) secretary-general and our officers are having technical discussions with several ministries,” said Azman following an examination of the supermarket’s food supply in connection with the Deepavali Festival Maximum Price Scheme from 20 October to 26 October.

In the meantime, Azman claimed that the deprivation of chicken eggs in a specific location was likely caused by issues with payment, remote areas, transportation, and logistics, which can easily disrupt delivery.

He also hoped that all industry players would work with the government to ensure a sufficient food supply to the market at fair rates, especially ahead of Deepavali.