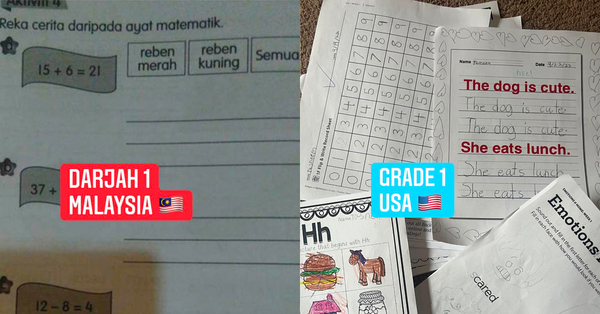 Facebook user Saif Suhairi took to his personal page on Monday, 17 October, after it was reported that primary school teacher Mohd Fadli Salleh was sent a disciplinary letter by the Selangor state Education Department for calling attention to the difficulty of the curriculum being taught in primary schools.

Saif said he wanted to show the differences between the study material and education system in the US and Malaysia so that his followers could make their own decisions about what is best for their children.

He first explained that his son is in Grade One in the US, which is for children aged six to seven and equivalent to Malaysia’s Standard One

“On the left is our country’s syllabus that I took from Mohd Fadli’s Facebook post, where Standard One students already need to memorise the six times table,” the father showed.

He then compared that with Grade One homework in the US, which shows his son tracing letters and numbers “like four-year-olds in kindergarten”, the father described.

“Is this good or not? Now it looks too slow instead, right? This is where I’m on the fence,” he confessed.

The dad further explained that students in the US only learn multiplication when they enter Grade Three.

“This is really slow. But [the curriculum] here starts to pick up in middle school and high school. I think maybe it’s because the schools here allow primary school students to play and learn to like school first.”

He added that if there are students who are quick learners, the schools do prepare advanced classes for them, and there are many other programmes for students of different learning abilities.

Saif went on to compare his son’s school life to that of primary school students back in Malaysia, including the long-term issues of heavy schoolbags and overcrowded classrooms

He said, “There are no books to bring home. The students leave them in their desks. They only bring home a Dell laptop (each student is given one), and some files for their homework. Their classwork is usually only done on pieces of paper, such as in my photo.”

Meanwhile, he said there are usually only 20 students in a class, at most 25.

Image for illustration purposes only.
Image via New Straits Times

Regardless of the comparisons, the parent opined that the Ministry of Education (MOE) in Malaysia has to find an effective syllabus and commit to it

“Our policies keep changing every time our government changes. This is not good for the education of our generation,” he said.

He also voiced his support for the primary school teacher who brought up the issue of education in the country, saying, “The important thing is, we need to support, not cancel, people that are thinking critically.”

Meanwhile, according to Malay Mail, as of Tuesday, 18 October, the MOE has cleared teacher Mohd Fadli of all offences he was accused of when pointing out flaws in the education system.

In June, Mohd Fadli voiced his concerns over the national primary school syllabus that has been too difficult for students to grasp:

Here are more of our nation’s teachers trying to make a change every day: