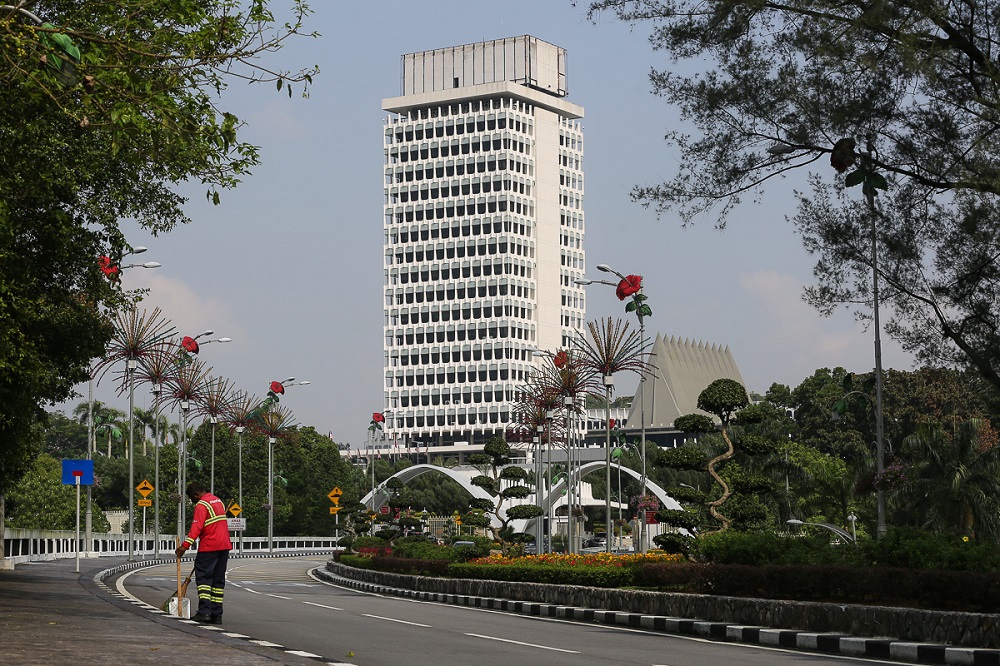 A view of the Parliament building in Kuala Lumpur March 19, 2021. – Picture by Yusof Mat Isa

KUALA LUMPUR, March 18 — The third week of the Dewan Rakyat session concluded with the house approving the motion of thanks on the Yang di-Pertuan Agong’s royal address when opening the First Meeting of the Fifth Session of the 14th Parliament on Feb 28.

The motion was passed after there was more support for than against it, after 27 ministries finished winding up the debate on the motion, which began with the Ministry of International Trade and Industry on Monday and concluded with the Prime Minister’s Department, yesterday.

The various issues raised by the 110 members of Parliament (MPs) in the debate session on the motion of thank to royal address were answered by the relevant ministers within four days of the winding up session.

Among issues raised were the claims of the heirs of the Sulu Sultanate, the impact of the Russia-Ukraine conflict, subsidised cooking oil, Memorandum of Understanding (MoU) between Malaysia and Indonesia involving the entry of Indonesian domestic workers (PDI) and the Indian Community Action Plan (PTMI), which were answered by the ministers or deputy ministers, and most of the answers were well received.

However, a commotion broke out during the winding up session of National Unity Minister, Datuk Halimah Mohamed Sadique, on Wednesday, causing the Speaker of the Dewan Rakyat, Tan Sri Azhar Azizan Harun, to adjourn the sitting for five minutes.

The commotion broke out when several opposition MPs disputed Halimah’s answer on the issue of the Malaysian Indian Transformation Unit (MITRA) fund.

The commotion also caused Sivakumar Varatharaju Naidu (PH-Batu Gajah) to be ordered out of the Dewan Rakyat for 10 minutes.

Explaining the issue of the Mitra fund, Halimah said that questions raised by MPs would not be clarified in the PTMI briefing scheduled for March 22, instead, they would only be clarified by the Malaysian Anti-Corruption Commission (MACC) once the investigation is completed.

Previously, it was reported that the MACC was reviewing all applications, expenditure reports and programmes that were said to have been implemented by the recipients of Mitra allocation grants from 2019 to 2021.

This follows the arrest of several company directors suspected of being involved in the misappropriation of allocation issued by MITRA.

There were also rumours of the resignation of Finance Minister, Tengku Datuk Seri Zafrul Tengku Abdul Aziz, as reported by local media, following his absence during the Ministers’ Question Time (MQT) session, and the tabling of four bills under his ministry for the first reading in Parliament yesterday.

Following the media report, Tengku Zafrul, in a posting on his Facebook page, denied the rumour and described the report as false because he had a personal emergency that had to be dealt with yesterday morning.

The issue arose when Tengku Zafrul was replaced by Deputy Finance Minister I, Datuk Mohd Shahar Abdullah, to table four bills under the ministry yesterday.

On his absence in Parliament at the MQT session, Tengku Zafrul explained that according to MQT’s standard procedures, only ministers could give answers, and he said this was not the first time a minister had been asked to read out the answers of other ministers.

The sitting will continue on Monday (March 21) with the tabling of motions as well as nine bills for the second reading, including the Prevention and Control of Infectious Diseases (Amendment) Bill 2021; Anti-Sexual Harassment Bill 2021; Supply Control (Amendment) Bill 2021 and Malaysian Border Security Agency (Dissolution) Bill 2021. — Bernama