Missile strikes on ‘many cities’ of Ukraine, says Kyiv 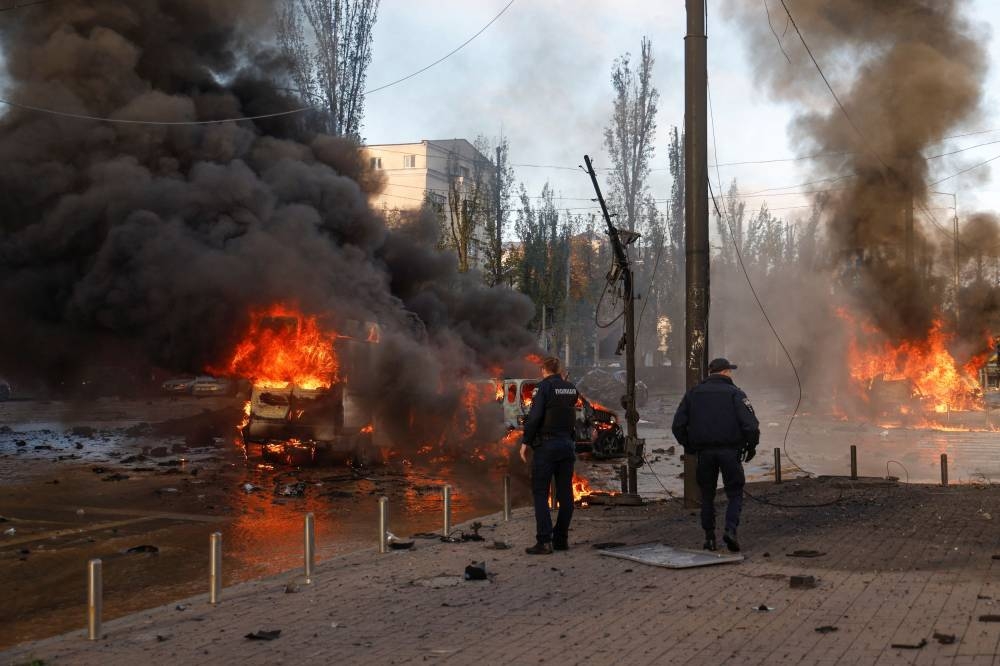 KYIV, Oct 10 — Missile strikes on “many” Ukrainian cities including the capital Kyiv left people dead and wounded on Monday, the country’s presidency said, a day after Moscow blamed Ukraine for an explosion on a bridge connecting Crimea to Russia.

“Ukraine is under missile attack. There is information about strikes in many cities of our country,” Kyrylo Tymoshenko, deputy head of the president’s office, said on social media, calling on the population to “stay in shelters”.

One AFP journalist in the city said one of the projectiles landed near a children’s playground, and that smoke was rising from a large crater at the impact site.

Several trees and benches nearby were charred from the blast, while several ambulances had arrived in the area.

“The capital is under Russian terrorists’ attack!” Kyiv mayor Vitali Klitschko said on social media, adding that the strikes had hit the city centre.

“If there is no urgent need, it is better not to go to the city today. I am also asking the residents of the suburbs about this — do not go to the capital today.”

“Air raid sirens are not subsiding around Ukraine… Unfortunately there are dead and wounded. Please do not leave the shelters,” President Volodymyr Zelensky said on social media, accusing Russia of wanting to “wipe us from the face of the Earth”.

“Take care of yourself and your loved ones. Let’s hold on and be strong.”

The strikes came a day after Moscow blamed Ukraine for the blast on a bridge linking Crimea to Russia, leaving three people dead.

“The authors, perpetrators and sponsors are the Ukrainian secret services,” Russian President Vladimir Putin said of Saturday’s Crimea bridge bombing, which he described as a “terrorist act”.

Putin was speaking during a meeting with the head of the investigation committee he has set up to look into the bombing, Russian news agencies reported.

The Russian leader is gearing up for a meeting with his Security Council later Monday, the Kremlin told local news agencies.

“Tomorrow the president has a planned meeting with the permanent members of the Security Council,” Kremlin spokesman Dmitry Peskov said.

The blast that hit the bridge sparked celebrations from Ukrainians and others on social media.

But Zelensky, in his nightly address on Saturday, did not directly mention the incident, and officials in Kyiv have made no direct claim of responsibility.

On Saturday, Russia said some road and rail traffic had resumed over the strategic link, a symbol of the Kremlin’s 2014 annexation of Crimea.

The 19-kilometre (12-mile) bridge is a vital supply link between Russia and the annexed Crimean peninsula.

Some military analysts argue that the blast could have a major impact if Moscow sees the need to shift already hard-pressed troops to Crimea from other regions — or if it prompts a rush by residents to leave.

Mick Ryan, a retired Australian senior officer now with the Center for Strategic and International Studies in Washington, said that even if Kyiv was not behind the blast, it constituted “a massive influence operation win for Ukraine”.

“It is a demonstration to Russians, and the rest of the world, that Russia’s military cannot protect any of the provinces it recently annexed,” he said on Twitter. — AFP