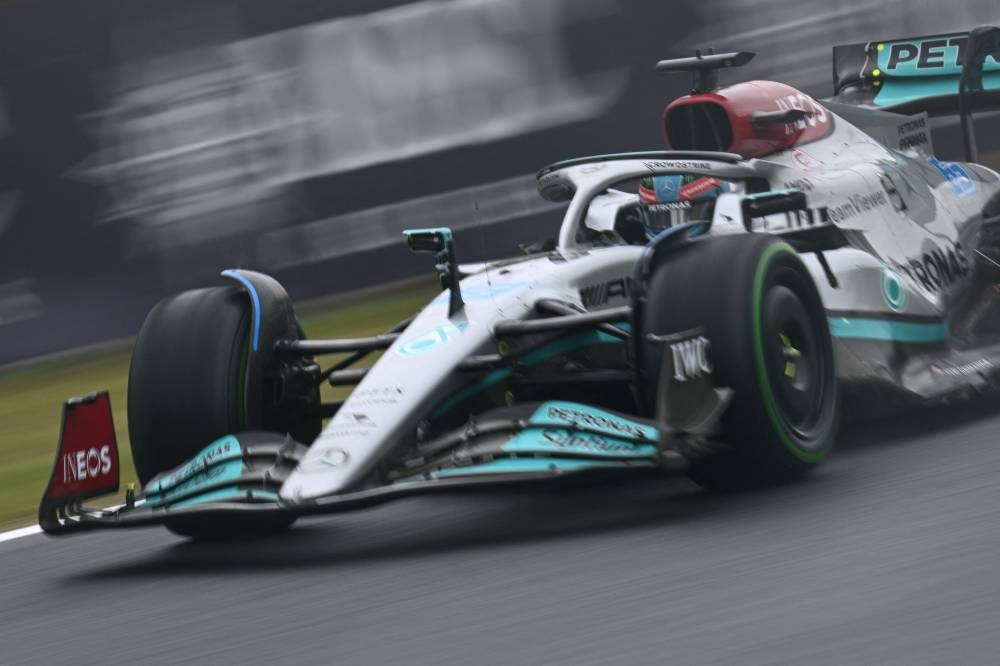 SUZUKA, Oct 7 — George Russell and Lewis Hamilton made it a Mercedes one-two ahead of title-chasing Max Verstappen in a soggy second practice today for the Japanese Grand Prix.

Runaway Red Bull leader Verstappen can clinch his second straight world title on Sunday if he wins the race with the fastest lap, no matter what his rivals do.

The Dutchman will also retain his crown if he wins and Ferrari’s Charles Leclerc, his nearest challenger, is third or lower.

But Verstappen was beaten to the quickest time in the second practice session by the Mercedes pair, with Russell clocking a fastest lap of 1min 41.935sec.

Seven-time world champion Hamilton followed his fellow Briton 0.235sec behind, with Verstappen coming in third, a sizeable 0.851sec behind Russell.

“It wasn’t a complete disaster with the weather,” said Verstappen.

“We could at least get round and do a little bit of stuff, but in terms of knowing where you are with pace, in the wet it’s always a bit tricky.”

A rainy start to the session at Suzuka meant the drivers began on wet tyres but switched to intermediates once the conditions improved.

That did not satisfy Verstappen though, with the flying Dutchman telling his team “all tyres are s***, no grip”, over the radio.

Dry conditions are expected for tomorrow’s qualifying but some rain is forecast again for Sunday.

“It’s just basically starting from zero tomorrow in the dry but again it’s the same for everyone and I don’t think it will make massive differences throughout the grid,” said Verstappen, 25.

Russell was happy to finish quickest after an oil leak kept him in the garage for most of the first session.

“It’s probably not going to be that representative for this weekend but definitely good learning for the future,” Russell said of the conditions.

“Nevertheless, it’s always nice to end the day top of the timesheets.”

Monaco’s Leclerc bounced off the track and found himself on the gravel at one point, complaining that the jolt had damaged his front tyre.

His Ferrari team later found a problem with his brakes and called him in before sending him back out 10 minutes later.

“The feeling is totally bad for some reason, I will try to make it better,” Leclerc said over the radio.

Mick Schumacher of Haas did not take part in the second practice after he crashed in the first session.

Schumacher spun into the barriers and onto the grass after the chequered flag, destroying his front wing and requiring a new chassis.

Two-time world champion Fernando Alonso went quickest in the wet first practice, and seventh in his Alpine in the second.

The Japanese Grand Prix returns on Sunday after a three-year absence because of the coronavirus pandemic.

Fans turned up to watch practice in colourful costumes despite the grim conditions, and Hamilton said he enjoyed being back after three years away.

“It’s always special when you do your first lap out, you think of all the legends as you come up to the last chicane,” he said, recalling Ayrton Senna and Alain Prost’s famous collision on the course in 1989.

“You just think you are driving through a space, a point on the circuit which had so much history. At that moment you think of the time before and how privileged you are to be in the position.”

Top-10 times from the second practice session at the Japanese Grand Prix today: