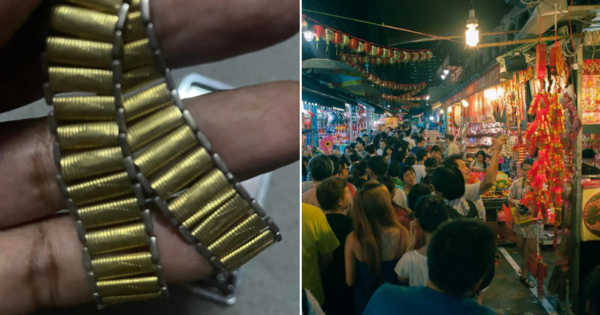 Facebook user Mohamad Kitartech recently shared an experience he had while visiting the Karat Market in Johor Bahru.

Located near the Causeway Link, the bazaar is frequented by Malaysians and Singaporeans alike, all trying to find their next hot deal. Luckily for Kitartech, this was one deal he would surely be glad he made the trip for.

Posted on the Facebook group Emas Used Atau Terpakai Sahaja, a community that focuses on discussions relating to reselling gold pieces, Kitartech came across an undistinguishable watch strap at the market. After finding out it was priced at RM10 only, he made the deal and purchased the item.

Little did he know at this moment, a seemingly ordinary watch strap, was not ordinary at all.

Upon bringing the watch strap home and weighing it, Kitartech discovered that more than a third of the weight was gold pieces

To test the authenticity of the gold, he then carried out an acid test to determine the amount of impurities attached to the gold. After scrapping the pieces on a touchstone, he proceeded to dissolve it in acid to rid the element of other potential metals.

When he was done, he noted that 24.91g of the watch strap was made of ‘999 Gold’, which refers to gold that is not mixed with any other metals, a composition that tallies to 99.9% gold.

Kitartech also claimed that the remaining 3.7g were made of ‘750 Gold’, which refers to a composition that is 75% pure gold.

After posting about his discovery on the Facebook community page, a slew of other gold enthusiasts poured in to comment on his purchase

While Kitartech did not state the amount all the gold would have been worth, one person asked what it may roughly amount to.

Another commenter chimed in, laying out the information of conversion used to calculate the worth of gold. Altogether, the gold from the strap would be worth an estimated RM7,500, including both grades of gold that were obtained.

A couple of commenters jokingly added how the Karat Market will now have more visitors searching for their next lucky deal.

“That’s it, thrift stores are gonna have a lot of visitors soon,” said one, while another wrote, “It must be a weird store, more people will be going to buy watch straps now.”

Some others cheekily hinted towards their intention to visit the Karat Market after this was released, tagging friends in the comments section to accompany them for the journey.

Despite plenty of congratulatory messages, multiple people accused Kitartech of making up the story for the sake of views

Intending to clear this fallacy, he proceeded to attach a photo in the comments section to prove his legitimacy to the situation.

“Many people are accusing me of making content,” the comment began. “Here is the original photo I took [of the gold] from my iPhone, and not from Google.” Alongside the photo, Kitartech also went on to state that he has a small gold business himself, though admitted his luck in being able to get pure gold for a cheaper price this time.