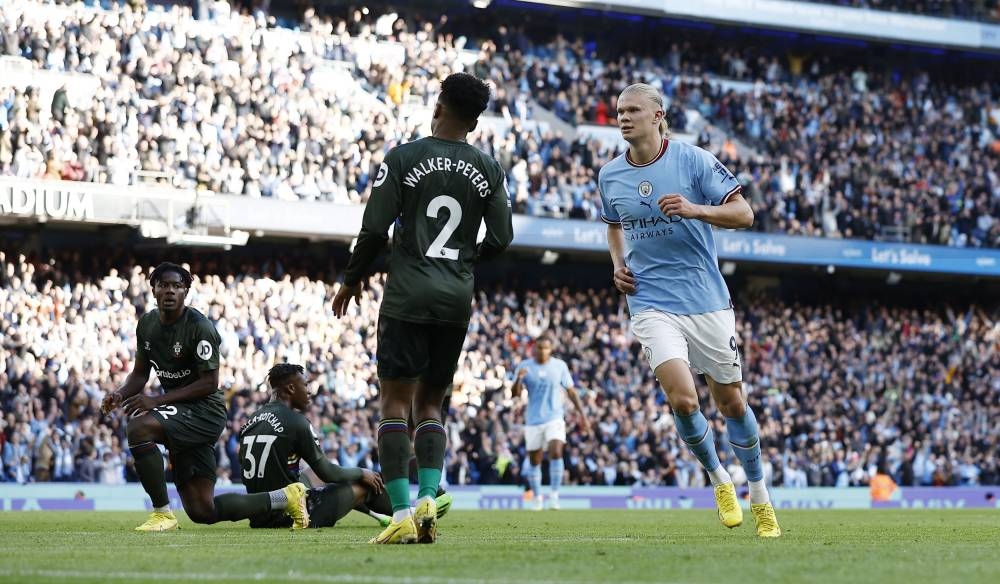 LONDON, Oct 8 — Manchester City continued their imperious home form by easing to a 4-0 win over Southampton while Chelsea and Newcastle United enjoyed comfortable victories and Tottenham Hotspur responded well after a difficult week to win at Brighton & Hove Albion.

City, who had trounced Manchester United 6-3 last week, barely had to break stride against Southampton, with Joao Cancelo, Phil Foden and Riyad Mahrez netting before Erling Haaland struck the fourth goal to stretch his scoring streak to 10 straight matches in all competitions.

City have won all five of their Premier League games at the Etihad Stadium, scoring 24 goals in the process. Southampton are 16th on seven points and coach Ralph Hasenhuettl faced questions about his future following reports he is on the brink of losing his job.

“It is not my decision to make. As long as I’m here we will still fight,” he said.

The victory took champions City top of the table with 23 points after nine matches and cranked up the pressure on early title rivals Arsenal, who host Liverpool on Sunday with the chance to reclaim the lead.

Tottenham rose to third on 20 points after a Harry Kane header earned them a gritty 1-0 win at Brighton & Hove Albion after a chastening seven days in which they were beaten 3-1 by rivals Arsenal, drew 0-0 at Eintracht Frankfurt in the Champions League and their fitness coach Gian Piero Ventrone died.

Spurs players wore t-shirts before the game saying ‘Always in our hearts, Gian Piero’ in honour to Ventrone, who passed away on Thursday aged 61 after being diagnosed with leukaemia.

“It’s been a difficult week to say the least and it was nice to get a win today. It was a scrappy goal but I’m really proud of the boys,” said Kane, who stooped to meet a cross from Son Heung-min and glanced it into the net.

Chelsea continued to show signs of improvement under coach Graham Potter as they strolled to a 3-0 win at home to Wolves, who are without a manager after sacking Bruno Lage last week.

Former Chelsea forward Diego Costa made his first start for the visitors but Potter’s side were dominant and goals from Kai Havertz, Christian Pulisic and Armando Broja secured a third consecutive win in all competitions following successes over Crystal Palace and AC Milan.

“It’s exciting. It’s been a really strong week,” said Potter, whose side moved up to fourth in the table on 16 points. “It’s a strong performance, especially in the first half. We had to hang on a bit in the second half but overall we deserved to win.”

Newcastle climbed up to fifth with an emphatic 5-1 home victory over Brentford, one year and one day after the completion of their Saudi Arabia-backed takeover.

Bruno Guimaraes, a ?40 million (RM205.6 million) arrival from Olympique Lyonnais and one of the club’s biggest signings since the takeover, scored in each half on a memorable afternoon for the club, who were languishing in the relegation zone when the Saudi Public Investment Fund (PIF) acquired the club from previous owner Mike Ashley for a reported ?300 million.

Bournemouth came from behind to beat Leicester City 2-1, scoring two goals in the space of five second-half minutes to and inflict a fifth consecutive away defeat on Brendan Rodgers’ side.

The result put renewed pressure on Leicester coach Rodgers, whose side are 19th in the table with only four points.

“I know if you’re in the bottom three, there will always be pressure,” Rodgers said. — Reuters