Malaysians Share How Often They Get Laid After Marriage 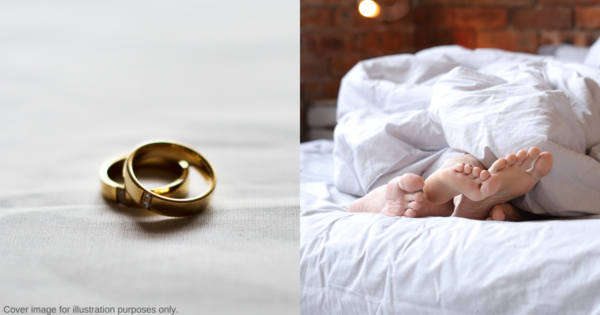 Disclaimer: The contents of this article are adult in nature. Reader discretion is advised.

Editor’s note: The responses were edited for clarity and censoring expletives.

Sex… It’s all fun and games when it comes without the responsibilities and label of ‘marriage’. If no one has told you yet, then you need to hear this: sex after marriage is complicated!

In a survey conducted by SAYS, we asked our readers what their sex life is like with their spouses after marriage and what factors have changed the frequency of their intimacy.

The majority of respondents, who were mostly between the ages of 25 and 44, said they were sexually active with their partners before marriage, with 40% of them having had sex once to three times a week. But after tying the knot, 36% have sex as frequently as before.

Once to three times a month seems to be the sweet spot for most couples after marriage, as that figure (15%) more than doubled to almost 46%. Meanwhile, only a small number of participants (4.8%) claim to get it on once a day or more after getting hitched.

According to 74% of respondents, sex is deemed highly important in a marriage, so does this mean married Malaysians aren’t as happy because their sex lives have dwindled down?

Well, the good news is that 68.8% of married Malaysians said they are happy with how often they get laid. However, it’s not as simple as you think.

Some of our SAYS readers detailed what factors have changed how often they have sex after marriage. Here are the top 16 submissions:

1. “Now, we gotta wait for the kids to be asleep before we can have sex”

Image for illustration purposes only.
Image via We-Vibe Toys/Unsplash

“Unlike before marriage, we could have sex whenever we felt like it and as often as we wanted.

“Also, we gotta be creative so we don’t wake the kids up. Sex isn’t limited to the bedroom alone, it’s all around the house!!

“It’s more fun, honestly, since you have the ‘license’ to do it, unlike before marriage, when you do it sneakily due to religion.”

2. “Before marriage, we were one of those LDR couples”

Image for illustration purposes only.
Image via Womanizer Toys/Unsplash

“We used to meet maybe once a month or two. Whenever we met, it was like an all-day-all-night (sex) marathon.

“Now, after marriage, it would be me who would sometimes refuse because of feeling tired from work and the baby. The husband still wants it every day like before we had a baby.

“Our baby is turning a year old this month. Sometimes we still do it every day, but sometimes it would be at least three times a week. No less than that.

“I definitely ‘get into trouble’ when I put on a night dress (lacey ones, which I actually like to wear to sleep). He would try his best to make me want it, too! FYI, my husband is younger than me, so yeah.”

Image for illustration purposes only.
Image via benzoix/Freepik

“I feel that after marriage, intimacy time has reduced, making sexual activity not satisfying as we’ll (he’ll) be done within five minutes.”

— Working Wife, married for one year and seven months

4. “I’m not sure what has changed, but I reckon my husband just wants it more than I do”

“When we do have it, I enjoy it. But I wouldn’t miss it when I haven’t had it in a while.

“It was okay before marriage, but after marriage I probably felt more comfortable saying no. I just don’t find sex very important.”

5. “We got pregnant a few months after marriage, but miscarried”

“It took time to heal physically and emotionally. Then the pandemic hit, and we just saw each other too often. I got pregnant again and all was well, but I had a late pregnancy loss at five months. That took way longer to heal.

“Then, last year, we got pregnant again and finally had our baby boy, who is now eight months old. So now we’re both just tired with work and the baby.”

6. “So many house chores to do on a daily basis and the side business, which leads to tiredness, and blue balls, which reduce sex drive”

“Tried before and then half-way through foreplay, (I) fell asleep.

“And, sometimes, I just do it on my own instead…”

7. “For a few months after getting married, we were both quite actively having sex because we were trying to get a baby”

“It took us eight months (of trying) before she got pregnant.

“After giving birth, her boobs grew much bigger, partly because of breastfeeding, and it became more exciting to have sex, with milky drips from ‘honka honka’ and (we went) condom-free without worrying about getting pregnant again.

“Newborns drain out more energy as well, then to add (on to the) working lifestyle and additional stress, the number (of times we have sex) gets reduced. The kid’s presence also affects the frequency (of sex), as we can only do it after the kid is asleep.”

8. “After marriage, we just got busier”

“However, we have always enjoyed each other’s company, even without sex. We enjoy hanging out and spending time together, but when we do have sex, spontaneity, foreplay, cosplay, adult toys, etc. are usually involved.

“So, even if it’s not as much as before, it’s much more intimate than before. Quality over quantity. Although I wouldn’t say two to five times a month is too little at all.”

9. “Moving in together after marriage has changed the intimacy”

Image for illustration purposes only.
Image via rawpixel.com/Freepik

“We started seeing different sides of each other that we weren’t aware of when we were dating.

“Different kinds of stress and pressure arose when we moved in together.

“During dating days, we only met over the weekend and on some weekdays after work. These meetings were exciting and oftentimes led to a lot of intimacy.

“However, after marriage and moving in together, the stress of having to do house chores – especially when we see house chores very differently and have a different pace for completing them – brings a whole different pressure to the relationship, leading to reduced intimacy.

“The tiredness from work, house chores, and the feeling of only one of us doing all the house chores changed the mood for intimacy.

“So, men, please help your wife with house chores if you want more intimacy.”

“The side effects are, of course, different for everyone. But I’ve felt like a different person whilst on it, not wanting to be touched or be physically intimate.”

11. “Increasing responsibility at work means less time for each other”

Also, her lower libido wasn’t obvious back when we were dating and meeting each other once a week. But now that we’re together, it does get in the way.”

— Ethan, married for one year

12. “I’d say after having kids, our sex life actually improved”

“The quality of sex, I mean, because the quantity is the same. Maybe because the effort being put in by my partner to help with the kids makes him more attractive in my eyes.”

— May, three years and one month

13. “At the start of our marriage (we had sex) at least two to three times a week”

“We both had good times, and then I got pregnant after five months of marriage, so he stopped entirely until I completed my confinement period.

“After that, I always initiated sex until I got tired of making the first move, so we eventually stopped.

“Maybe it’s because of his sudden weight gain, and I have been transparent with him many times. He doesn’t want to see a doctor yet and keeps convincing me that he will lose weight. But years have passed and we are still facing the same issue.”

14. “Our child is now a toddler, so it’s difficult to find time to be intimate”

“Not to mention, my toddler is very clingy to me also, so it’s a challenge to even find a distraction for him to find a quick moment of intimacy… or we just wait at night when our toddler is asleep!

“Another is that we have both been working. Husband works outside, and I work remotely. So at the end of the day, we’re just both exhausted.

“But when we have chill days and when we’re in the mood, then we just automatically want to be together. But of course, we still have to consider our toddler, haha.”

15. “After pregnancy and having a child are big obstacles/hurdles of having sex”

Image for illustration purposes only.
Image via Love Matters Africa

“Both of us are extremely exhausted after taking care of our child. We wake up early and sleep late every single night, and in between we need to wake up to feed our baby.

“My wife’s hormones changed after pregnancy, which is normal for most mums during postpartum. She doesn’t feel like having sex even after having adequate rest, although we sometimes sneakily dirty talk with each other.

“Meanwhile, I have a desire for sex since I’m pretty “dry” for it after such a long time of not having it. I would say that since my wife entered the second trimester of pregnancy, we sort of stopped our sexual activities to avoid any mishaps, even though it would still be fine to continue doing it.

“It has been 16 months since we last had sex, and it’s quite frustrating to wait this long. Nevertheless, I do have to take into consideration my wife’s fatigue, as she takes care of the baby more than me.

Image for illustration purposes only.
Image via FORMAT arw/Unsplash

“The energy level is not there anymore, as my husband claims. He is easily tired and can’t perform.

“For me, it’s mostly vaginal dryness nowadays, but this can be overcome with lubrication.

“When we were younger in our 30s, we were at it like rabbits. Weekly, (it would be) three to four times. Even marriage and pregnancy didn’t stop us either! Unbelievable, right?

“Now we would be lucky if we did it twice a month, subject to my husband’s energy levels. But we are in our 50s, so I guess we still have a pretty good sex life. I would love to do it once a week nowadays, but hubby has a low energy level.”

Read what Malaysians are sharing about their sex lives: