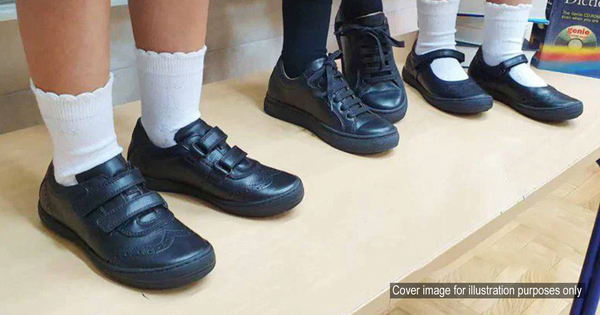 A senior teacher at a school in Butterworth, Penang allegedly punished a Form One student for wearing the “wrong” shoes to school

According to the Form One student, her family could not afford shoes with laces for her.

She alleged that the teacher first called her out for wearing shoes with velcro straps and then she made her kneel with her hands up during school assembly on Tuesday, 1 November, reported Free Malaysia Today.

“I was told to kneel on a tarred area with my hands up before the assembly,” the news portal quoted her as saying, adding that when she told the teacher about her family not having money, she did not listen.

Photo of shoes with velcro straps for representation purposes only.
Image via Mouse Mommy Treats/Blogspot

The student also claimed that after the assembly, the teacher cut off her kayiru/kalava, a holy thread that Hindus wear on their right wrists

The teacher also ordered her to remove her pottu/bindi, a coloured dot or sticker worn on the centre of the forehead, as well as wipe away the thiruneeru/vibhuti, which is sacred ash, from her forehead.

“I was reprimanded by [the] teacher for wearing velcro shoes,” Malaysiakini quoted the 13-year-old as saying, adding that she is now afraid to go to school after the incident.

She has since lodged a police report against the teacher

The female teacher has also lodged a report, denying the student’s claims.

Meanwhile, Chief Minister Chow Kon Yeow has taken note of the incident and has asked the state education department to take appropriate action against those responsible if the allegations were true.

“[We] will not compromise on such matters. I hope the department can expedite the action to avoid negative reactions and perceptions by various parties towards educational institutions,” he said.

Professor Dr Ramasamy Palanisamy, who is Penang Deputy Chief Minister II, called the punishment “cruel” and “barbaric” in nature and criticised the school’s “interference” in the student’s religious practice

According to Ramasamy, the teacher was “completely out of line” for shaming the student.

“My question is, why the triple punishment simply for not wearing the proper shoes? By not wearing the right shoes, did the student offend the practices of other religions? Who gave the teacher the authority to remove religious symbols such as the holy thread and the sacred ash?” he asked.

Ramasamy, who is also chairman of the Penang State Economic Planning, Education, Human Resources, Science, Technology, and Innovation Committee, noted that while the Butterworth police have confirmed the student’s report, he demanded to know what exactly they are going to do about the incident.

“I understand from informed sources that the school authorities are trying to prevent those who witnessed the incident on Tuesday from telling the truth. In other words, there is an attempt at a cover-up,” he said.

He questioned if they were going to “sweep the incident under the carpet as a minor one”.

A file photo of Ramasamy Palanisamy.
Image via Focus Malaysia

According to the Tasek Gelugor police chief, speculations on such matters can affect racial harmony.

He assured that the matter is taken very seriously by the police and that they are not compromising with any of the parties involved. The case is being investigated under Section 298 of the Penal Code.

Radzi said that they have recorded witness statements from several students and teachers.

Based on initial statements, he said that they did not see the student being punished during the assembly and that they saw the holy thread on her hand and the pottu on her forehead even after school was over.

In India, a student was disparaged by a government officer for asking if the government could provide proper menstrual hygiene facilities:

Last month, a father living in the US compared his seven-year-old son’s homework with the Standard One syllabus that is being taught here: