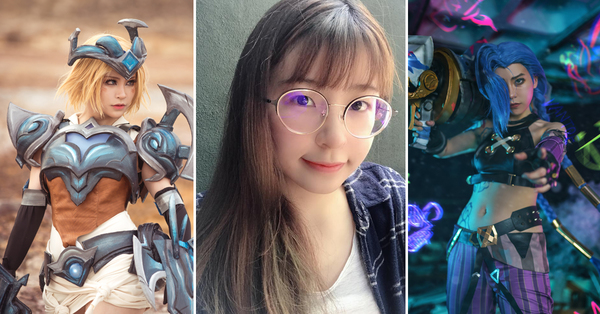 “One day, by chance, I noticed an Anime, Comic, Games (ACG) event taking place in a mall near my home, so I decided to hop over to have a look. I was overwhelmed with the amount of ACG content I never knew existed and it was also my first time seeing cosplayers. I thought they were so cool being able to dress up like the characters they love,” she shared with SAYS.

“Soon after that, I met a cosplayer in my part time job as a waitress. She introduced me to cosplay and taught me how to DIY, do makeup, and buy wigs. I was ecstatic when she invited me to go to a cosplay event together and even lent me a cosplay costume to put on.

“I got more into cosplay when I met my best friend during my studies in the UK. We went to conventions together in England and learnt a lot about how to DIY cosplay outfits there.”

“We planned tonnes of cosplays together and joined many competitions performing on stage together. And then before I knew it, I was being invited to local and overseas conventions as a guest, a judge, and to host panels,” she said.

“Arcane is one of my favourite series and I have been a massive fan of League of Legends since I started cosplaying. I love Jinx’s character and facial looks. It’s been some time since I cosplayed a character like this, so I was really excited to challenge myself with a new look,” she explained.

In 2016, Rikka was actually invited to collaborate with Riot Games’ League of Legends for the Official Star Guardian Jinx Skin Launch, so she was excited to cosplay the character again with a group of friends.

“We had been planning this for quite some time and wanted to debut it together at the Season4Otaku Event where we were all invited as guest cosplayers. I did not have much to prepare as I commissioned the prop-making to a very talented individual called Momo whom I got to know when we both participated in the preliminary round of an International Cosplay Competition called the Clara Cow Cup.

“And I’m glad I did because just doing the wig alone took me a solid 10 hours and the make up took me two hours.”

“The video was really impromptu where we wanted to make a memory of us in the cosplay so we took it there and then. They are all amazing individuals who put in a lot of effort into their cosplays. My friend Takoyaki even shaved his hair to properly attached the braids for Ekko!”

Rikka quit her day job in 2019 as a nutritionist to start her own health and beauty line. Together with her partner, they founded Banana Boss Cosmetics, with their first line of product being a moisturising matte lipstick (certified by NPRA and MOH).

“Being a cosplayer myself, I always have very chapped lips or skin breakouts at the end of a cosplay event. So we wanted to produce cosmetic products that people can use daily and for cosplays!” she shared.

Unfortunately, the pandemic hit just when they had confirmed their product specifics and the ‘face mask era’ led to a huge delay on their project. With events also put on hold, there weren’t as many cosplay gigs available for her to earn some income. She eventually went back to her day job of being a nutritionist a year later and placed less focus on their business.

When February 2021 rolled around, they decided to officially re-launch Banana Boss Cosmetics. “With the world slowly accommodating to COVID-19, hopefully, we are slowly progressing on the right track. Now we have launched two lines (a total of seven products) and an upcoming eyeshadow project launching in May,” she shared.

“I’ve had the chance to collaborate with big commercial brands, such as Riot Games’ League of Legends, MTV Asia, Nippon Paint, Digi, and Skechers, to name a few. And I am also very lucky that many of my followers support my work by purchasing my merchandise, such as posters and photo books. But I don’t think the pay is enough to sustain as cosplay can be quite expensive as well.”

Although she has considered cosplaying for a living, there are too many factors to think about. “I think it is very similar to building a personal brand and image and that comes with a constant worry of whether the public will enjoy your content and/or how they view you.”

It’s one thing to do it as a hobby, she shared, but once you delve into commercial cosplays, there are a lot more commitments and sometimes you’d have to sacrifice your own ideals and standards to meet timelines or cosplay unfamiliar characters.

“That said, I’m always open to paid opportunities (might just be a tad picky but that’s all), as it helps offset my cosplay costs. Hehe,” she added during the interview.

“Materials in Malaysia are also very costly. I can easily find similar and better materials in countries like Thailand at a much cheaper cost.”

With cosplay gaining more recognition from the public, what comes with it is also harsh criticism at times, she added.

“Very often we are subject to harsh criticism when we do not look similar enough to movie/anime characters and body-shaming is very commonly experienced by many cosplayers. I got a comment saying ‘Im too fat for Jinx’.”

“That aside, I do get the ‘weird eye’ a lot, especially at my age by my peers. My family doesn’t exactly agree with cosplaying as well until I produced some ‘results’ and started getting paid and recognised.

“Most of my peers feel that I should ‘settle down’ and stop spending so much time cosplaying. I can’t exactly empathise because I really enjoy what I do and I feel very much alive bringing characters I love to life.”