Malaysian Bisexuals Answer: Are Men Or Women Better In Bed? 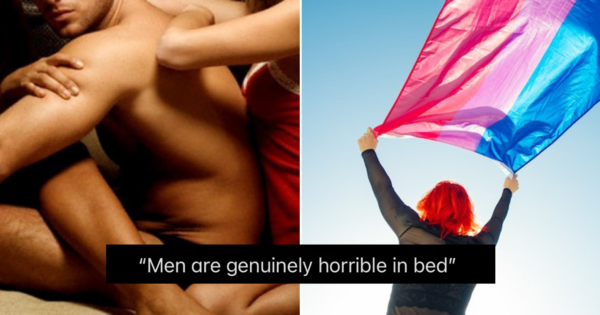 The contents of this article are adult in nature. Reader discretion is advised.

Disclaimer: Some names have been changed for privacy purposes.

The age-old question of what makes sex good has been boiled down to technique, connection, and even right down to emotion.

But does it ever cross your mind that maybe certain sexual traits are tied to the gender of the person you’re having sex with?

In its simplest form, bisexuality denotes the characteristic of a person that is romantically and sexually attracted to both men and women. Though the definition has grown in time with the understanding of wider groups within the LGBTQ+ community, most break it down to bisexuals not having a particular preference when it comes to intimacy.

While only 4% of the global human population identify as bisexual, that percentile still makes up a whopping 320 million people. Misunderstood or underrepresented, we recently carried out a public poll to get the perspective from Malaysian bisexuals on their preference in the bedroom.

Often referred to as the ‘free spirit’ among the other sexuality types, it is time that we got a fair verdict on who really is the superior gender when it comes to the bedroom: men or women.

Image for illustration purposes only.
Image via Eligible Magazine

“I often say it’s both or none”

“Based on my experience, I often say it’s both and none. The main reason is because every individual of the said genders have their own [feelings]. I have met experienced guys (mostly gay guys) who are bad at doing basic stuff, and I have also experienced women (mostly straight women) who are the same as well.

“I had surprises along the way, where curious guys exceeded what I expected when it comes to going down and doing their business. So basically, it comes down to the individual themselves, though what I experienced may be different from other bisexuals who only meet one gender for sex.

“But if we’re talking about getting an easy lay, it’s the guys. Don’t have to factor in being intoxicated or anything.” — Terrance, 30 years old (he/him).

“With their relationships and sex, [men] feel less aware of themselves and what they want”

“I’ve been asked this before by people, and I sum it up this way: on average, men tend to be more ‘forward’ in bed, and that equals rougher, kinkier sex. In contrast, women lean ‘softer’ — more sensual, more foreplay, more ‘tender’. Wouldn’t say that’s universal, but it’s common enough.

“I also think there’s a dimension whereby that because of our society, men who have sex with men are not as able to be as… free?

“With their relationships and sex, they feel less aware of themselves and what they want. Again, not at all universal, but I think these are the trends.” — Vin, 35 years old (he/him).

Image for illustration purposes only.
Image via Sex Toy Market/OpenPR

“If great sex is defined via explosive orgasms, then women (even random hookups and quickies) are definitely better.

“Sex with men tend to get better only after a few times. It’s rare that the first and only time with a man is amazing. This is my opinion.” — Tasha (she/her).

“As someone who’s been with both [men and women] but leans more towards women, I would say women are definitely better.

“It could be a subjective thing, too, as I’ve found women to be more uninhibited, passionate, and satisfying.

Image for illustration purposes only.
Image via Beyond Ages

“I feel like it’s really hard to pick between the two, really”

“Women are soft (so so soft!) and sweeter, and the ‘sessions’ are often times more passionate. Men, on the other hand, are firm and intense. That’s not to say that they aren’t sweet and passionate (although in my experience, I tend to find myself being attracted to guys when I want something more rough).

“I feel like it’s hard to pick between the two, really. Both are amazing in bed — just different.

“However, I’ve come to realise that if we’re judging it on whether I finish/orgasm, then it’s a higher chance with women than it is with men — although, the sessions are definitely longer (sorry guys) and incredibly tiring on my arms (sorry girls) haha.” — Jade, 22 years old (she/her).

“Men are genuinely horrible in bed, and I can’t stress that point enough”

“I think I was more forced to have sexual relationships with men in my youth, simply because it was the ‘societal norm’ of how things should go down. But I realised over time that I naturally gravitated towards women. I thought I was a lesbian at a time in my life — but then I realised I wasn’t as I got older.

“I’m Punjabi so culturally, dating outside of your race is a big deal — let alone dating someone of the same sex. I was withheld from the dating scene even after I hit 18 so I didn’t go out much and didn’t get laid.

“Something wasn’t that great about having sex with a woman, I mean it was good at first, but I had to do all the work in bed, and a partner just laying there to get plowed wasn’t pleasurable to me.

“I don’t know what it is, but I think cause I didn’t date men for most of my adult life that I’m cock crazy today LOL. I’m currently in a relationship with my girlfriend, but we have an open thing. I kind of exclusively see guys outside of our relationship now.” — Amrit, 40 years old (he/him).

“He just knew where all the right places were, I’ve never had such a passionate encounter before”

“Sex is whatever for me. I very rarely had an urge to get down to business and it didn’t depend on who I was with. Man or woman, neither seemed to be able to get me going. I thought I didn’t have a sex drive at one point, until I met my current boyfriend.

“Prior to him, I never bottomed with another guy. Looking back now, it was definitely a fragile ego thing. But after we got together and I tried it out, I realised what I’ve been missing. He just knew where all the right places were, I’ve never had such a passionate encounter before him.

“I’m still very much attracted to women, although I’m off the market. At least I’m aware moving forward of what really gets my juices flowing.” — Adam, 28 years old (he/him).

Image used for illustration purposes only.
Image via Womanizer Toys/Unsplash

“Guys hate women who are dominant in the bedroom, or well, the men I’ve been with at least”

“I’m pretty dominant in bed and I like it. Nothing gets me off better than having complete control over the person I’m with, and I do genuinely enjoy men in bed more than women. But guys hate women who are dominant in the bedroom, or well, the men I’ve been with at least.

“It’s kind of forced me to only find sexual satisfaction with women ’cause they’re more adventurous in the bedroom. They don’t mind that I’m the one in complete control and what gets me ticking is getting them off.

“Since my right hand isn’t male or female, I’d say neither”

“I can’t say whether it’s from lack of experience or just the fact that no one I’ve ever been with knows their way around my body, but I think both men and women are equally pleasing and disappointing in bed.

“I will say this though, I can almost always count on getting it on better with women in bed than men if I know we’re heading in that direction.

“But if I had to choose, self-pleasure and service is still king of the lot. I know exactly what makes me feel good, and I’m happy with that. Since my right hand isn’t male or female, I’d say neither of them get my vote this time.” — Liv, 19 years old (they/them).

Image for illustration purposes only.
Image via Healthline

Who do you think is better in bed? Let us know!

We also asked Malaysians how many of them prefer casual hookups over solid relationships:

Not sure what would be considered a red flag? Here are some nightmare dating stories: