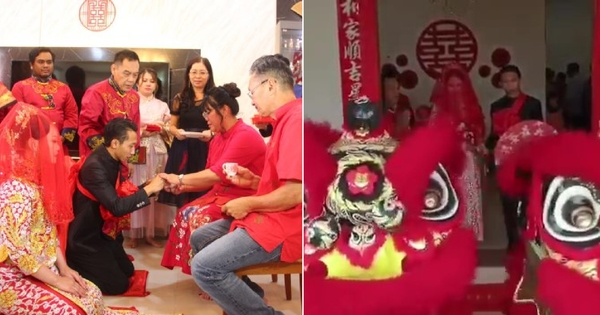 Love knows no bounds and certainly no culture, as this Malay-Chinese couple will prove to you

In a heartwarming video by Sin Chew Sarawak, a Malay-Chinese couple held a traditional Chinese wedding on Monday, 17 October. It was held in Miri, Sarawak, where the bride, 29-year-old Chen Yanxin, is from.

The groom, 29-year-old Mohd Amin who is from Rawang, Selangor, pulled out all the stops during the ceremony by arriving at the bride’s house at 7am in a wedding limousine, accompanied by a lion dance and a flower bouquet in hand. He was also pictured arriving in traditional Chinese wedding attire, looking very dapper.

His brothers were also reported to be present at the wedding, where they too were seen wearing traditional Chinese clothes.

Chen is the eldest daughter in her family and is reported to be a successful individual who works at a hospital laboratory in West Malaysia, while Mohd Amin has a business background with his family.

Upon his arrival, Mohd Amin proved that he would fit into his bride’s Chinese family just fine as he partook in several Chinese wedding games and activities with ease

The ceremony proceeded with the bride and groom going through the customary Chinese wedding programmes such as participating in wedding games and partaking in the tea ceremony, where Mohd Amin was pictured presenting tea to his in-laws and addressing them as ‘mother’ and ‘father’ in Mandarin.

The video also captured the groom serenading his bride with a famous Teresa Teng song, ‘The Moon Represents My Heart’ and calling out, ‘My wife! I love you!’ in Mandarin.

The bride and groom kneeling in front of the bride’s parents to present them with tea during the tea ceremony.
Image via Sin Chew Sarawak (Facebook)

While Mohd Amin practised jiu-jitsu, Chen was involved in the art of Muay Thai fighting. Sparks flew from there and the rest was history.

However, the couple was met with some pushback from Chen’s mother due to their differences in race and culture. It took her three years to finally accept the multi-cultural couple’s relationship.

Chen’s mother’s acceptance towards their union can be attributed to her changing her mind when she witnessed first-hand Mohd Amin’s good character when he came to visit the family in Miri for two weeks.

Chen’s father, however, had no issues accepting his daughter’s relationship with her Malay partner as he had worked in Brunei before and told reporters that a marriage between a Chinese and Malay individual was not uncommon in the country.

Chen’s father talking about his acceptance towards his daughter’s marriage to Mohd Amin.
Image via Sin Chew Sarawak (Facebook)

Mohd Amin expressed his interest in learning more about his wife’s culture and its customs, and both have a deep respect for each other’s heritage

Speaking to reporters, Mohd Amin hopes that people will respect his marriage to his Chinese partner. He does not believe that their differences in race or religion will come in the way of their relationship so long as they love and take care of one another.

He described his wife and in-laws as a harmonious family and feels very fortunate to be accepted.

“We (Malaysians) have learnt that we should be accepting of each other’s cultures and heritage. It is best when all the races are united as it will only bring the country together and foster a stronger nation,” he said.

Mohd Amin hopes that others will be able to respect and understand his marriage to Chen.
Image via Sin Chew Sarawak (Facebook)

You can watch the video of the wedding ceremony below:

Congratulations to the happy couple!

Here are more Malaysian multi-cultural weddings that prove that love conquers all:

Here are some unconventional wedding stories that might pique your interest: