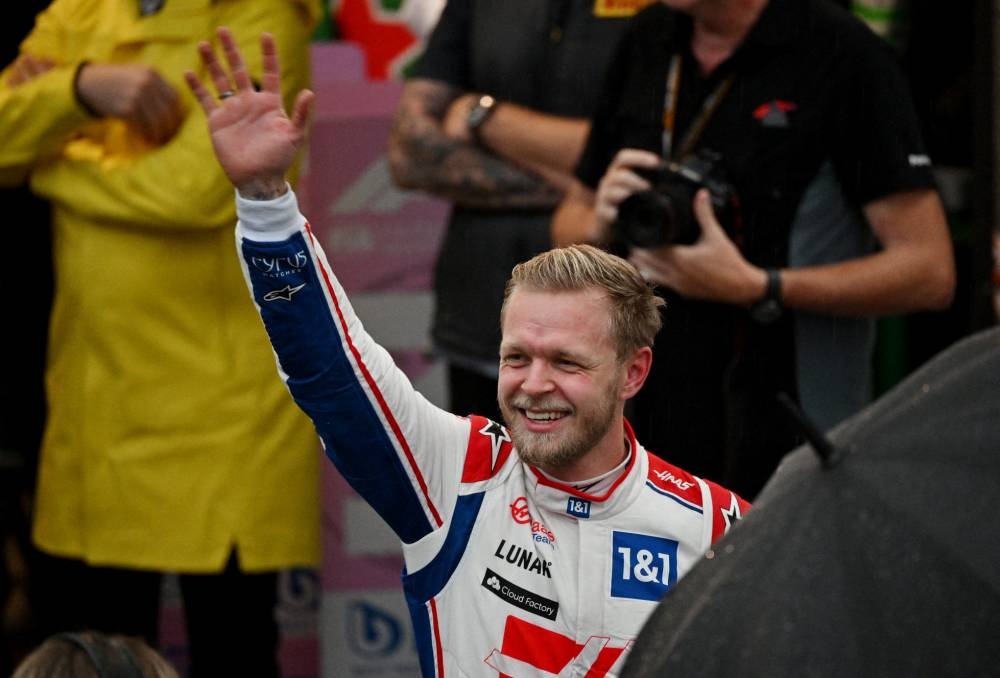 SAO PAULO, Nov 12 – Kevin Magnussen took a sensational first Formula One pole position, in his 100th race for the Haas team, after a weather-affected qualifying for today’s sprint race at the Sao Paulo Grand Prix.

The Dane was on top when George Russell spun and beached his Mercedes into the gravel at Interlagos, bringing out the red flags to halt the session with eight minutes remaining and rain falling.

The team had timed it right, Magnussen first out of the pitlane with the track still dry and no chance of anyone else then going faster than his lap of one minute and 11.674 seconds.

Red Bull’s Max Verstappen, his second world title already won but with records to set in the last two rounds of the season, will join the Dane on the front row while Russell qualified third despite his error.

“I don’t know what to say,” Magnussen said as U.S.-owned Haas, eighth overall and with one of the smallest budgets in the paddock, were left with one driver at the front and the other at the back.

“You’re kidding,” Magnussen had said over the team radio when told he was fastest as the red flags were waved.

“I’ve never, ever felt like this in my life. Don’t celebrate yet, guys.”

He did not have to wait long, with the garage erupting in joy at the end of the session and Magnussen emerging from his parked car to hug jubilant principal Guenther Steiner.

Under the sprint format first introduced last year, the fastest driver in Friday qualifying takes pole for the record books even if he does not start Sunday’s main grand prix from the top slot.

That final grid is decided by the 100km sprint, which also awards points to the top eight.

Saturday will be the third such race of the season, with Verstappen winning the two previous ones at Imola and in Austria.

“Compared to the proper opposition tomorrow it is looking good and in these conditions anything can happen,” said the Dutch driver, who is chasing a record 15th win of the season and Red Bull’s 10th in a row.

“We are still at the front.”

Magnussen, who debuted with McLaren in 2014, will be starting his 140th grand prix – his long wait for pole still far behind that of Red Bull’s Sergio Perez who secured his first this season at the 215th attempt. Read full story

Asked what his approach would be on Saturday, the 70th birthday of team owner Gene Haas, the Dane grinned: “Maximum attack”

The hour-long session started in damp conditions after a light drizzle with drivers heading out on intermediate tyres and then switching to slicks as the track dried.

McLaren’s Lando Norris, who ultimately qualified fourth despite a bout of food poisoning on Thursday, was fastest in that frantic first phase – 0.297 quicker than Mercedes’ Lewis Hamilton.

Seven-times world champion Hamilton suffered as a result of his team mate’s spin and will start the sprint from eighth place.

The sky became a darker grey and the rain returned during the second phase, with Verstappen top of the timesheets ahead of Ferrari’s Carlos Sainz and Charles Leclerc.

Leclerc started the final shootout as the only driver on intermediates – a puzzling gamble that meant he then had to pit for softs and did not set a time.

The Monegasque, who starts 10th today and is fighting Perez for second overall in the championship, did not hide his disappointment.

“I will speak to the team and understand what we can do better in those conditions,” he said.”I accepted the decision to go on the inters and then I waited for the rain that never came.” – Reuters