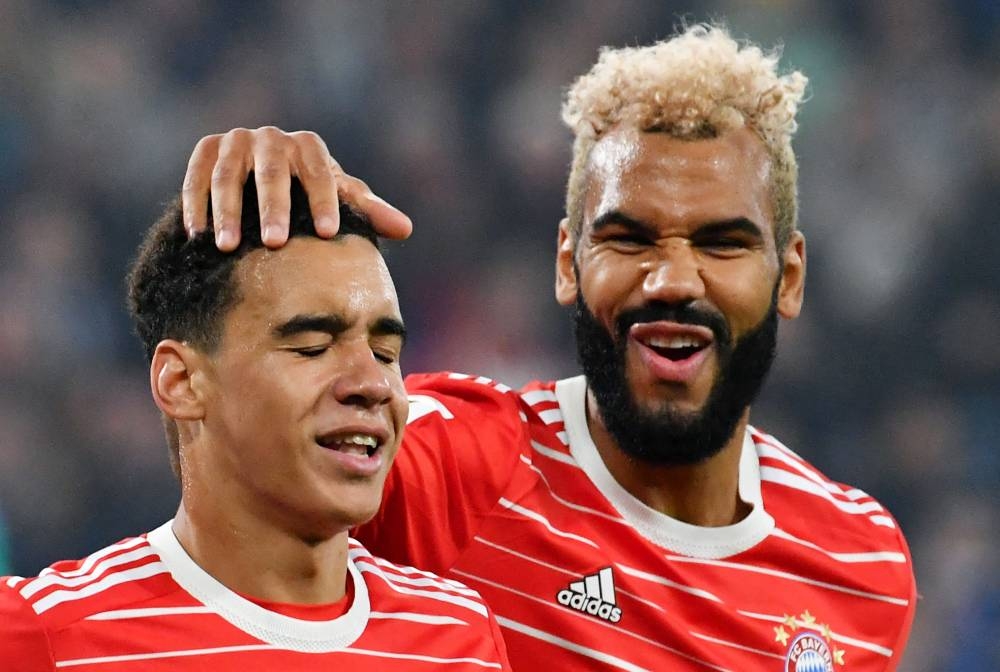 BERLIN, Nov 13 — Bayern Munich’s teenage forward Jamal Musiala laid on two assists to help his side extend their lead atop the table to six points in a 2-0 win away at Schalke on Saturday.

Coming into the game against last-placed Schalke, who have won only twice this season, Bayern boasted a starting XI featuring exclusively players selected for the Qatar World Cup — six for Germany, four for France and one for Cameroon.

The home side managed to keep Bayern at bay for much of the opening stanza, before a sublime Musiala back-heel put former Arsenal forward Serge Gnabry in space to score his side’s first after 38 minutes.

Musiala set up his side’s second after 52 minutes, with Bayern launching a length-of-the-field counter attack after a Schalke free kick.

Musiala, who represented England as a teenager before shifting allegiance to Germany, assessed his options before sliding the ball to Cameroon striker Eric Maxim Choupo-Moting, who scored his 10th goal from his last nine games for Bayern.

Musiala had the ball in the net less than 10 minutes later, but the goal was ruled out for offside.

“Jamal Musiala has again prepared two goals, he has played an outstanding first half and will hopefully play both the World Cup and the second half of the season even better.”

Schalke manager Thomas Reis credited “clever” Bayern and said his side would face an uphill battle after the winter break.

“My team invested everything, (but) in the end Bayern were just too clever in particular situations,” Reis said.

“Now we are the hunters. We will start next season in 18th place.”

Bayern Munich are now unbeaten in their past 22 games against Schalke, dating back to 2010 when Musiala was just seven.

A 2-1 win away at Werder Bremen gave RB Leipzig their ninth victory in their past 10 appearances on Saturday.

Leipzig took the lead after just 13 minutes through Portugal striker Andre Silva, before Bremen centre-back Christian Gross equalised in the second half.

After the match, Schlager credited his side’s “mental strength”, while manager Rose said Leipzig “defended with everything we had”.

“We are happy and delighted with the win.”

Bayer Leverkusen’s resurgence under manager Xabi Alonso continued, with a 2-0 win at home against Stuttgart.

A first-half strike from French striker Moussa Diaby and a second-half goal from German defender Jonathan Tah continued Leverkusen’s recent momentum, with the home side unbeaten in three after winning just one of their first six under Alonso.

Wolfsburg’s stunning recent form under former Bayern Munich manager Niko Kovac continued as the Wolves won at Hoffenheim for a fifth victory in nine games in all competitions.

Hoffenheim hit the lead thanks to a first-half goal from Christoph Baumgartner, before an injury time own goal from former Liverpool defender Ozan Kabak put Wolfsburg draw level.

Manager Thomas Letsch, who took over a winless Bochum in late September, has secured four wins from his eight games in charge to help distance his side from last-placed Schalke.

In Berlin, goals from Ivory Coast winger Wilfried Kanga and German striker Marco Richter helped Hertha pick up just their third win of the season, with a 2-0 triumph over Cologne.

Placed third and fourth respectively, Union Berlin and Freiburg have a chance to cut Bayern’s lead to four points — and reclaim second spot — when they clash in Sunday’s late game. — AFP