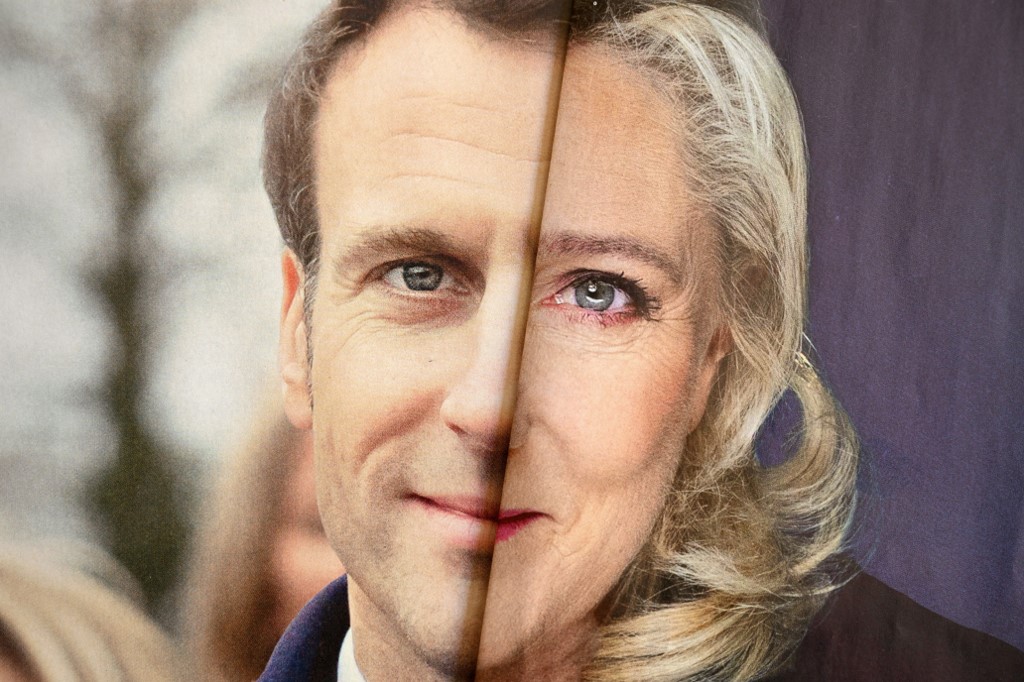 Macron accused Le Pen of “lying” to voters on social policy, having a “racist” programme and showing “complacency” in her ties with Russian leader Vladimir Putin.

The president is projected to come out on top in Sunday’s first round of voting, but far short of the majority needed to avoid a run-off between the top two candidates on April 24 — and with Le Pen close behind.

Adding to the intrigue, far-left candidate Jean-Luc Melenchon is snapping at their heels in third place and still fancies his chances of causing an upset by reaching the second round.

While Macron easily beat Le Pen in the 2017 run-off, polls have shown a much tighter scenario this time, with the far-right leader reducing her gap with the incumbent each week.

The candidates of France’s traditional parties, the right-wing Republicans and the Socialists on the left, are facing a debacle on election night, continuing a shake-up of French politics begun when the centrist Macron took power in 2017.

Friday is the last day of campaigning, with no more rallies, interviews or other campaign activities allowed from midnight (2200 GMT) until after the polls close Sunday at 8:00 pm.

Le Pen said Thursday that she had never been “so close” to power at a jubilant final rally in her party’s southern stronghold of Perpignan.

She urged people to turn out and vote with analysts predicting one quarter of French adults may abstain and the final turnout crucial for the outcome.

The war in Ukraine as well as strains on the health system after two years of Covid-19 are high among voter concerns, behind the biggest worries of all: inflation and incomes.

Macron, criticised by some for doing only minimal campaigning as he dealt with Russia’s invasion of Ukraine, sought today to regain the initiative by turning his fire on Le Pen.

In an interview with the Parisien daily, he accused her of deceiving France with promises of social spending that she would not be able to finance.

“She is lying to people as she would not be able to do this,” he said.

After Le Pen called for any woman wearing the Islamic headscarf in public in France to be fined, he added: “It’s a racist programme that plans to split society in the most brutal way.”

With her party still paying back a loan from Russia, he said: “Mrs Le Pen is financially dependent on Mr Putin and his regime and has always showed complacency towards him.”

Le Pen, speaking to franceinfo radio, slammed his comments as “extremely outrageous,” saying she was “shocked” to be described as racist.

Asked by RTL radio if he feared losing, Macron said: “Nothing is taken for granted… (but) I have a spirit of conquest more than a spirit of defeat.”

Seeking to show his popular touch, he also dropped into a local Paris market, chatting with a cheese seller and a fishmonger.

Should he triumph on April 24, Macron will be the first French president since Jacques Chirac in 2002 to win re-election.

He would have a new five-year term to implement his vision of reforming France and consolidate his status as Europe’s number one national leader after the departure from power of German chancellor Angela Merkel.

For his European supporters, Macron is a centrist champion against the populism prevalent in much of Europe, especially after election victories last weekend by the right-wingers Hungarian premier Viktor Orban and Serbian leader Aleksander Vucic, who both have cordial ties with Putin.

Polls show Macron winning the first round against Le Pen by a handful of percentage points, with a score in the mid-to-high twenties, followed by Melenchon in the high teens.

The run-off is still projected to be won by Macron but only by slim margins and in stark contrast to 2017, where he won over 66 per cent of the vote.

Prominent political analyst Pascal Perrineau said there was “uncertainty” ahead of the first round, as in France there had never been so many voters who were undecided or had changed their minds.

“And as for the second round, it will not be the 2017 scenario with a large victory for Macron,” he told AFP.

A figure from Macron’s party, who asked not to be identified, acknowledged that the campaign had not gone according to the original plans.

The Ukraine war “turned the initial campaign plan upside down” the official said.

Macron in his RTL interview admitted he had entered the campaign “later than I had wanted” due to Russia’s invasion of Ukraine.

Melenchon has enjoyed a last-minute poll bump and is talking up his chances of springing a surprise, helped by an innovative rally Tuesday that saw him beamed by hologram into 11 French cities.

Greens candidate Yannick Jadot, the Republicans candidate Valerie Pecresse and the flagging Socialist nominee Anne Hidalgo appear certain to be ejected in the first round.

Far-right former TV pundit Eric Zemmour made a stunning entry into the campaign last year, but analysts say he has aided Le Pen by making her appear more moderate. — AFP