Leclerc grabs pole ahead of Verstappen for Australian Grand Prix 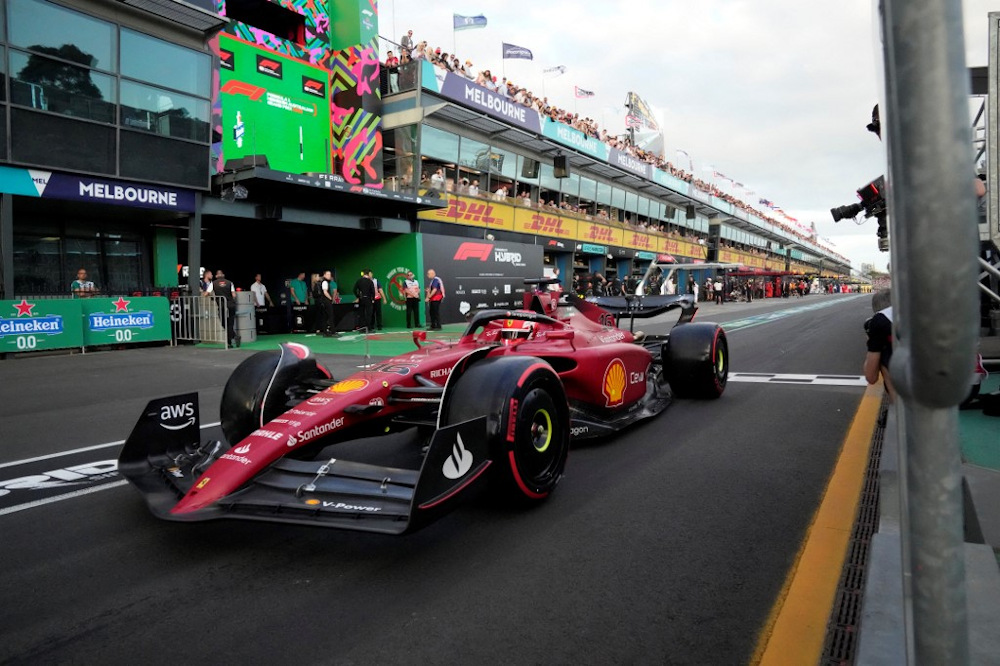 Ferrari’s Monegasque driver Charles Leclerc takes part in the qualifying session at the Albert Park Circuit in Melbourne on April 9, 2022, ahead of the 2022 Formula One Australian Grand Prix. — AFP pic

MELBOURNE, April 8 — Ferrari’s Charles Leclerc claimed pole today for the Australian Grand Prix ahead of title rival Max Verstappen — and in the process broke Lewis Hamilton’s stranglehold on the grid in Melbourne.

Verstappen’s Red Bull team-mate Sergio Perez is on the second row after coming in third ahead of McLaren’s Lando Norris.

Mercedes’ Hamilton, who has been the pole-sitter eight times in Melbourne, including the last six in a row at Albert Park, will start fifth.

It is a second pole of the year for Leclerc after the season-opening race in Bahrain, where he went on to win.

He knocked out his rivals with a flying lap at the death of one minute 17.868, fractionally ahead of Red Bull’s world champion Verstappen, who won in Saudi Arabia two weeks ago.

“It felt good. Even more because it’s a track where I’ve always struggled in the past, in Q3 I managed to put everything together so it feels great, very happy,” said Monaco’s Leclerc.

“The car is nice to drive, everything is possible tomorrow. We need a good start.”

Verstappen had complained of oversteer and balance problems in the final practice ahead of qualifying for tomorrow’s race and the Dutchman said he was still struggling despite being second-fastest.

“We’ll try to analyse it. This weekend has been all over the place. Happy to be second, but as a team we want more.”

While Mercedes’ speed is improving, it still has problems with porpoising — bouncing too much at speed. But fifth was a major improvement for Hamilton, who only qualified 16th in Jeddah. His team-mate George Russell was sixth today.

In a morale-boost, both McLarens made Q3 for the first time this season with Daniel Ricciardo coming seventh. Esteban Ocon in an Alpine was eighth and Carlos Sainz in the other Ferrari only ninth.

Veteran Fernando Alonso, who has been quick all weekend in the Alpine, had to settle for 10th after crashing at Turn 11, saying on the radio he couldn’t shift down gears.

But it was a dismal day for four-time world champion Sebastian Vettel, who sent his Aston Martin into a wall at high speed in the final practice and managed just three laps in qualifying.

He finished 18th to cap a miserable time for the German, who missed the opening two races of the year with Covid, suffered engine failure on Friday and was fined EUR5,000 (RM22,952) after riding a moped on the track.

His team-mate Lance Stroll also endured a tough day. After crashing in third practice, his crew patched up the car and got him out with four minutes left of Q1.

But before he completed a lap, Nicholas Latifi careered into him, leaving debris from the Canadian’s Williams strewn on the track.

“He just hit me man,” Stroll said in an expletive-laden radio message, with Latifi responding: “I don’t understand what he was doing, he wasn’t looking in his mirrors. Car’s destroyed.”

Perez topped Q2 from Sainz and Leclerc with Valtteri Bottas, the 2019 Melbourne winner, a casualty in his Alfa Romeo.

The Finn’s team-mate Zhou Guanyu also missed the cut, as did Mick Schumacher in a Haas and AlphaTauri pair Pierre Gasly and Yuki Tsunoda.

Verstappen was fastest in Q1 ahead of Perez.

Along with Latifi, Stroll and Vettel, Kevin Magnussen in a Haas and Williams’ Alex Albon, who already has a three-place grid drop after an incident in Saudi Arabia, also failed to get out of Q1. — AFP