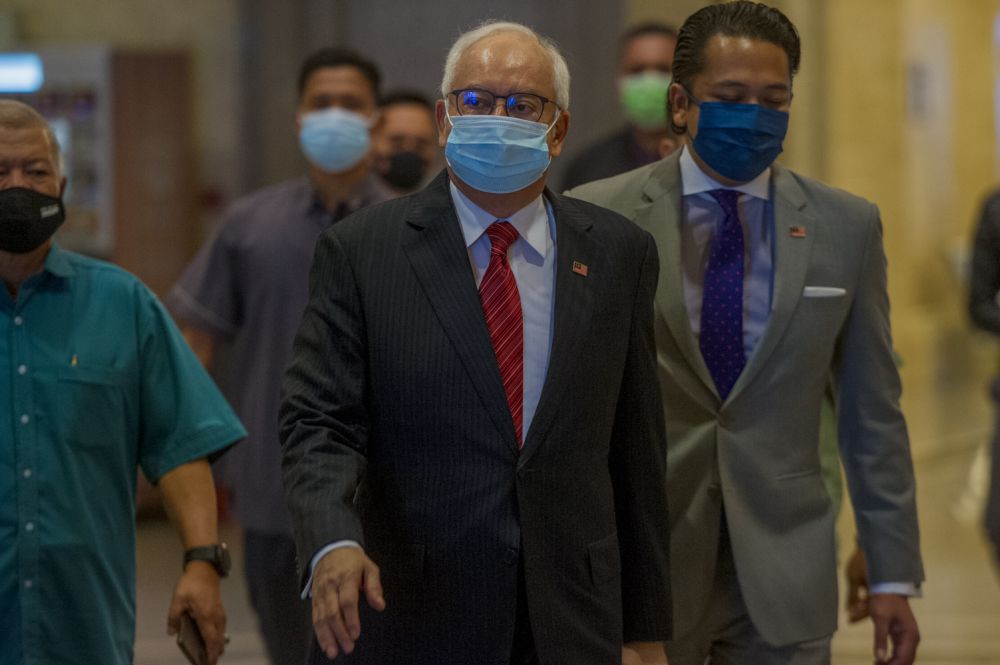 Datuk Seri Najib Razak arrives at the Court of Appeal in Putrajaya May 18, 2021. — Picture by Shafwan Zaidon

KUALA LUMPUR, June 11 — Datuk Seri Najib Razak could lose his position as an MP, his pension and his properties if the High Court insists the former prime minister pay RM1.69 billion in taxes and late payment penalties claimed by the government, his lawyer argued today.

Today was the hearing of Najib’s application to High Court judge Datuk Ahmad Bache for a stay — which is a temporary suspension of enforcement or execution — of the same judge’s July 22, 2020 summary judgment for Najib to pay RM1,692,872,924.83 as claimed by the IRB for the years 2011 to 2017.

Najib’s lawyer Tan Sri Muhammad Shafee Abdullah today said a stay was necessary as the Inland Revenue Board (IRB) is currently attempting to enforce the RM1.69 billion summary judgment by seeking to make Najib bankrupt in a separate bankruptcy proceedings filed in court this year.

The second is an appeal before the Special Commissioners of Income Tax (SCIT), with the case management for this on July 21.

Shafee argued that the High Court judge has jurisdiction or powers to grant a stay for the enforcement or execution of the RM1.69 billion judgment, further saying that a stay is necessary at this stage to preserve the status quo and to prevent Najib’s appeals from becoming nugatory or invalid if he later succeeds in his appeals but has already been made bankrupt.

Citing a Supreme Court decision in 1995 in the Kerajaan Malaysia v Jasanusa Sdn Bhd case, Shafee noted that special circumstances where the courts had granted stay include situations such as “abuse of position” and when there is “extreme personal hardship”.

“In our case, the Revenue is attempting to bankrupt my client and they are in a hurry to do it, and we say that is an abuse of position, because my client ought to be given the fullest latitude to ventilate his causes of action in relation to the amount that is imposed on him through both processes, one is the appeal, but more importantly the matter before the Special Commissioners (of Income Tax),” he argued.

He also claimed that the IRB had incorrectly calculated the amount of tax assessment that Najib has to pay, saying that the amount calculated and bankruptcy proceedings would result in potential “extreme hardship” for Najib.

“And therefore to stay the execution would be the necessary thing, because if Yang Arif does not stay the execution of the order, then my client cannot revert himself to the position before. Because once you are bankrupt, you lose the seat, you lose everything, therefore it is an irreparable damage,” he said, referring to Najib’s Pekan parliamentary seat.

Shafee also argued that there is no issue of Najib escaping from paying tax or facing the law, as he cannot even leave the country and remains in Malaysia.

Among other things, Shafee had also said a stay does not mean Najib would not have to pay the tax claimed at all, but is merely a suspension of the enforcement of the High Court judgment to pay while waiting for the outcome of his appeals.

Shafee also explained that his law firm had on December 16, 2020 wrote to the SCIT to ask for a six-month postponement of a January 21, 2021 case management in order to pursue written appeals with the IRB to negotiate for a tax settlement amount and conditions.

He said the SCIT granted the postponement of the case management to July 21, and that the IRB did not object to this postponement for the purposes of pursuing the negotiations for six months.

Shafee then claimed however that Najib had received a bankrutpcy notice which initiated the bankruptcy proceedings, within days of Umno’s late March decision to pull out from the Perikatan Nasional government. He suggested that this was after the “political development” relating to Umno.

While saying that IRB lawyers were of course not involved in this as they were just carrying out their duties, Shafee said of the bankrutpcy notice: “My client stands to lose everything, what he has built up since 1976. It hit me very hard, because I haven’t graduated yet and I’m slightly older than him by one year. When I was in university, he was already in politics.

“He’s an MP, he will lose everything if there is no stay, as a result of which, a bankruptcy order can be taken against him. His pension will be lost, his properties would be auctioned in order for all these to be executed and so on, and it will never be reversible, Yang Arif. It can never be repaired,” he argued.

General view of the Inland Revenue Board of Malaysia logo in Kuala Lumpur December 9, 2020. — Picture by Ahmad Zamzahuri

Senior revenue counsel Norhisham Ahmad, who represented the Malaysian government, however argued that the IRB was just taking the ordinary course of action to enforce the High Court’s July 22, 2020 judgment requiring Najib to pay RM1.69 billion.

Norhisham said that Najib had not done anything since the July 2020 judgment to at least propose or discuss about payment, but had instead asked the IRB to review the tax amount assessed and calculated by the IRB and that the IRB had subsequently decided that the amount would not be reviewed.

The SCIT case management initially scheduled for January 21 was postponed for six months to July, with Norhisham saying that the IRB had waited until only February 2021 before it filed the bankruptcy notice to have Najib pay the tax amount claimed.

Norhisham said the IRB was waiting for Najib to propose settling the tax amount.

“From the summary judgment being entered, July 22, 2020 until February 4, 2021, almost eight months, there’s no discussion, no proposal for payment was sent over the IRB, so what option do we have, Yang Arif?

“This is a normal situation where we have obtained the judgment, and in order for us to get whatever tax outstanding, we have to proceed. We have not even served the bankruptcy notice until April 5, we were still waiting, is there any so-called proposal to resolve the issue, but none, Yang Arif.

“So this chronology shows we are not in a hurry to file in the bankruptcy proceedings Yang Arif,” he argued.

Norhisham also cited a previous court decision in 2017 where it was stated that the fact that a large amount of money is involved do not amount to special circumstances.

On behalf of the government, Norhisham asked the court to dismiss Najib’s application for the stay of enforcement of the July 2020 judgment on the RM1.69 billion tax claimed.

Later, Norhisham also responded to Shafee’s suggestions of “political interference”, explaining that the IRB was merely taking the usual action of enforcing or executing court decisions to have the assessed tax paid by taxpayers.

When asked by the judge if IRB meant that it is its right to initiate bankruptcy proceedings rather than due to political interference, Norhisham agreed: “Yes, very true. This is since we started the income tax department, we have to proceed with execution.”

The High Court judge said he will deliver his decision on Najib’s stay application on June 14 by email, which would be before the Court of Appeal hears Najib’s appeal on June 16.