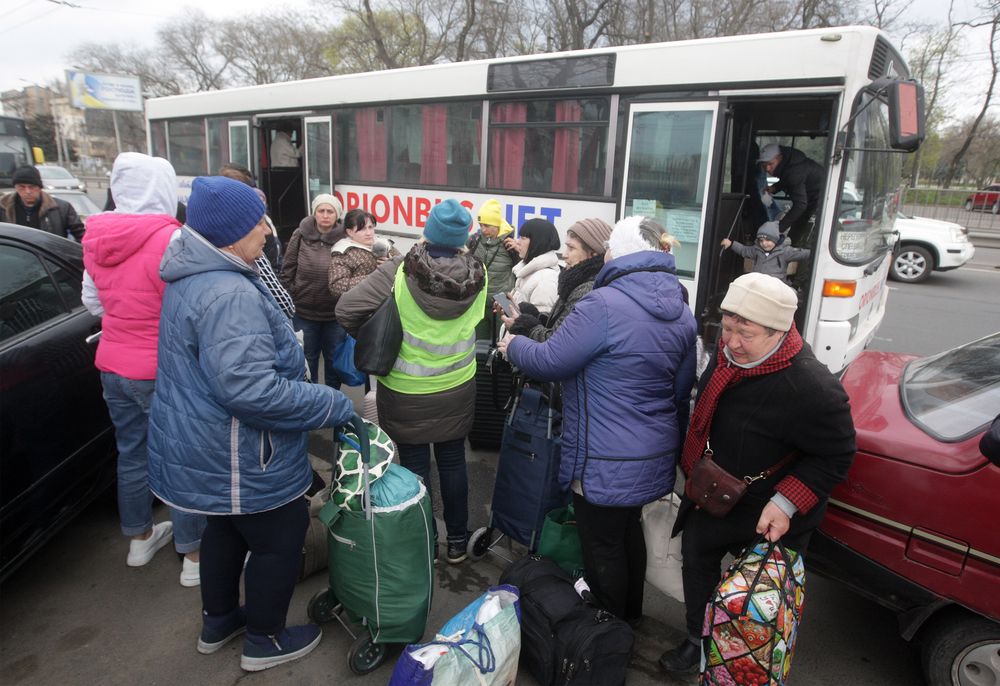 Ukrainian refugees evacuated from Mykolaiv walk after arrival by busses in Odesa, Ukraine 20 April 2022, amid Russian invasion in Ukraine. — NurPhoto via Reuters

ZAPORIZHZHIA (Ukraine), April 24 — Kyiv prepared yesterday for its first wartime visit from two top US officials, as Ukraine accused Russia of killing six people in a strike on Odessa that all but buried hopes of a truce for Orthodox Easter.

The Sunday visit by Secretary of State Antony Blinken and Defense Secretary Lloyd Austin will come at a symbolic moment — on the day the war enters its third month — and with fierce battles continuing in the country’s east.

It also comes as the situation in the shattered port city of Mariupol remains bleak. The latest of many attempts to evacuate civilians failed Saturday, and the situation facing an embattled unit of Ukrainian fighters sheltering in tunnels under a sprawling steel mill there appeared increasingly desperate.

A series of European leaders have already traveled to Kyiv to meet with President Volodymyr Zelensky and underscore their support, but the United States — a leading donor of finances and weaponry — had yet to send any top officials.

Asked by AFP to comment on the highly sensitive trip by two of President Joe Biden’s top cabinet members, the State Department declined.

Zelensky, who announced the visit, also issued a new call for a meeting with Russian counterpart Vladimir Putin “to end the war.”

“I think that whoever started this war will be able to end it,” Zelensky said, adding he was “not afraid” to meet the Russian leader.

But he again stressed that Kyiv would abandon talks with Moscow if its troops in Mariupol were killed.

Zelensky also criticized a decision by UN Secretary General Antonio Guterres to visit Moscow on Tuesday, before heading to Kyiv.

“There is no justice and no logic in this order,” he said.

Around 200 residents gathered at a designated evacuation point in Mariupol on Saturday but were “dispersed” by Russian forces, city official Petro Andryushchenko said on Telegram, adding: “The evacuation was thwarted.”

He claimed others had been told to board buses headed to places controlled by Russia.

Mariupol, which the Kremlin claims to have “liberated”, is pivotal to Russia’s war plans to forge a land bridge to Russian-occupied Crimea — and possibly beyond as far as Moldova.

Ukraine says hundreds of its forces and civilians are holed up inside the Mariupol steel plant. Kyiv has repeatedly called for a ceasefire to allow civilians — many barely surviving with little or no access to food or water — to exit safely.

But on Saturday a Ukrainian presidential adviser, Oleksiy Arestovich, said Russian forces had resumed air strikes on the factory.

“Our defenders hold on regardless of the very difficult situation and even carry out counter-raids,” he said.

Further west, a missile struck a residential building in the Black Sea port of Odessa, killing eight people, including a three-month-old baby, and wounding at least 18, according to Zelensky.

And Russia’s defence ministry also said it had targeted a major depot stocking foreign weapons near Odessa, attacks that upended the relative calm the city has enjoyed since the beginning of the war.

Moscow also accused Ukrainian special services in Odessa of preparing a “provocation with the use of toxic chemical substances” that could then be blamed on Russia.

Western powers have accused Russia in the past of making such accusations as a cover or diversion for attacks its own forces are planning.

There were new attacks overnight in Ukraine’s second city of Kharkiv, in the northeast.

“It was a terrifying night,” said Yelena, with black bags under tear-reddened eyes. Residents there said Russian strikes could come at any hour, day or night.

“Everything shook,” she recalled. “There were two strikes, later there were more, we were no longer able to sleep and spent all night in the corridor.”

The governor of the Kharkiv region, Oleg Sinegubov, said on Telegram that Ukrainian forces had retaken three villages near the Russian border after “fierce battles” in which two people had been killed.

‘Evacuate if you can’

In nearby Lugansk, governor Sergiy Gaiday said shelling was “round the clock” and urged people near the front to “evacuate if you have the chance”.

The latest fighting comes a day after a senior Russian military officer announced the beginning of “the second phase of the special operation.”

“One of the tasks of the Russian army is to establish full control over the Donbas and southern Ukraine,” Major General Rustam Minnekaev said.

Russian forces, which withdrew from around Kyiv and the north of Ukraine after being frustrated in their attempts to take the capital, already occupy much of the eastern Donbas region and the south.

Minnekaev said the focus was to “provide a land corridor to Crimea,” which Russia annexed in 2014, and possibly towards Transnistria, a breakaway pro-Russian region of Moldova where the general claimed Russian-speaking people were “being oppressed”.

‘What could be worse’

After changing their strategic focus to southern and eastern Ukraine, Russian forces left behind a trail of indiscriminate destruction around Kyiv, including in the commuter town of Bucha.

A United Nations mission to Bucha documented “the unlawful killing, including by summary execution, of some 50 civilians there”, the UN’s Office of the High Commissioner for Human Rights said.

Russian forces had “indiscriminately shelled and bombed populated areas, killing civilians and wrecking hospitals, schools and other civilian infrastructure, actions that may amount to war crimes”.

Tania Boikiv, 52, said Russian troops took her husband from their home in Bucha, held him for two weeks, then beat him to death as they retreated.

“The most terrible thing in my life is that my husband, my loved one, is gone,” she told AFP. “I don’t know what could be worse.”

Also Saturday, Roman Starovoit, the governor of Russia’s region of Kursk, which borders Ukraine, said on Telegram that a Russian border post had been hit by Ukrainian mortar fire, although there were no casualties. — AFP