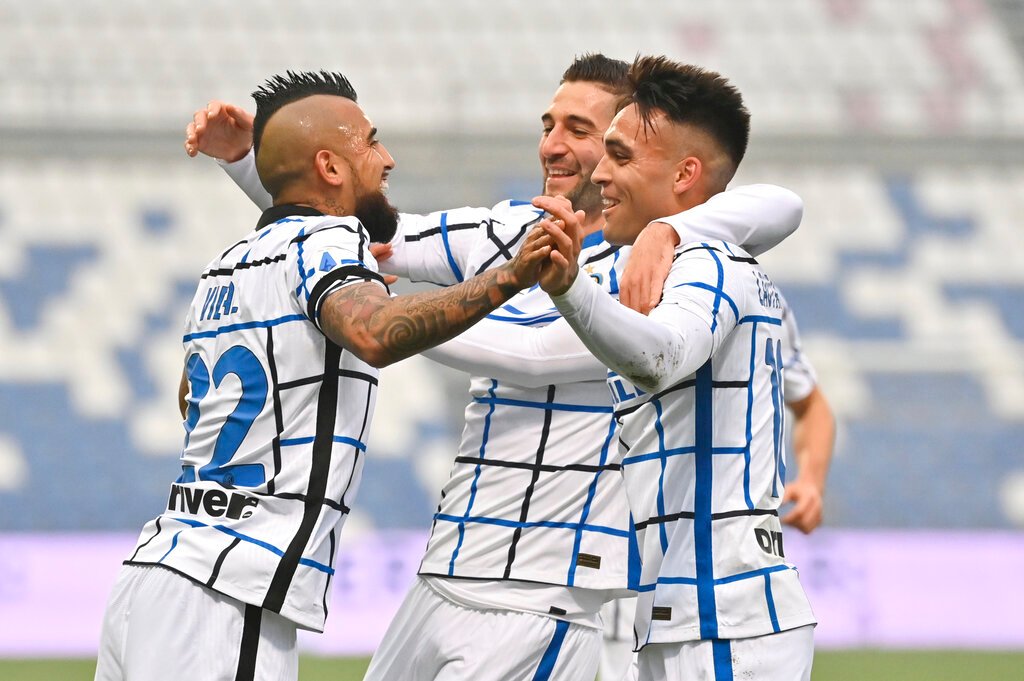 MILAN: Juventus again showed their reliance on Cristiano Ronaldo as their superstar attacker was absent for a 1-1 draw at promoted Benevento on Saturday, while Serie A title rivals Inter Milan beat high-flying Sassuolo 3-0 to move second.

The champions’ fifth draw in nine league matches leaves Andrea Pirlo’s side fifth, three points behind leaders AC Milan ahead of their match with Fiorentina on Sunday.

Ronaldo did not play after scoring in Juventus’ 2-1 victory over Ferencvaros on Tuesday which sealed their berth in the Champions League last 16.

“(Ronaldo) had a little problem and he wanted to play anyway in the Champions League,” said Pirlo.

“He had played many games with the national team, it is normal for him to get tired and rest.”

And Morata, who scored the late winner on Tuesday, opened the scoring in the 21st minute after collecting Federico Chiesa’s cross-pitch pass to bring his tally to eight goals in all competitions this season.

But Gaetano Letizia’s volley just before the break earned a point for Benevento.

Dybala wasted chances to score his first league goal this season, including four minutes from time with goalkeeper Lorenzo Montipo tipping over the bar.

Morata also missed opportunities to rescue Juventus before being shown a red card after the final whistle for arguing with the referee.

In Emilia-Romagna, Antonio Conte’s Inter bounced back from the 2-0 loss to Real Madrid which left their Champions League hopes dangling by a thread, inflicting this season’s first defeat on Sassuolo.

Inter move second ahead of Sassuolo, with both teams on 18 points after nine games, two points behind AC Milan and one ahead of Conte’s old team Juve.

“I’d like to congratulate my players on how they did today,” said Conte.

“It’s not easy, especially at Inter, because many people can’t wait to criticise, to throw mud at us.

“But we are unified and such situations should provide us with more strength.”

Alexis Sanchez opened the scoring with his second goal in as many league matches in the fourth minute, following good work from Lautaro Martinez and poor defending from Sassuolo’s Vlad Chiriches.

It was a nightmare match for Chiriches who 10 minutes later accidently turned a powerful Arturo Vidal centre into his own net, with the Romanian later limping off with a muscular problem.

Roberto Gagliardini added a third just before the hour mark, sealing a win that will boost Inter before Tuesday’s European trip to Borussia Monchengladbach.

“Two goals down to Inter after 13 minutes, it gets tough,” said Sassuolo coach Roberto De Zerbi.

“But to grow you have to fall and have days like this.”

Romelu Lukaku and Ashley Young came on in place of Martinez and Sanchez for the final 10 minutes, with the Belgian forward having a goal ruled out for offside.

Conte also brought on Christian Eriksen, who looks set to leave Inter in January after just one year.

The Danish midfielder came on for Ivan Perisic for the final five minutes to make his first appearance in over a month.

“In January, if (Eriksen) has not taken part in some matches, he will be the first to ask to be transferred,” Inter’s CEO Giuseppe Marotta said before the game.

“Last January we took a market opportunity, let’s not forget that we bought him for €20 million and he’s a very good player.

“The coach has the right and duty to field the 11 players who give the most answers and guarantees.”