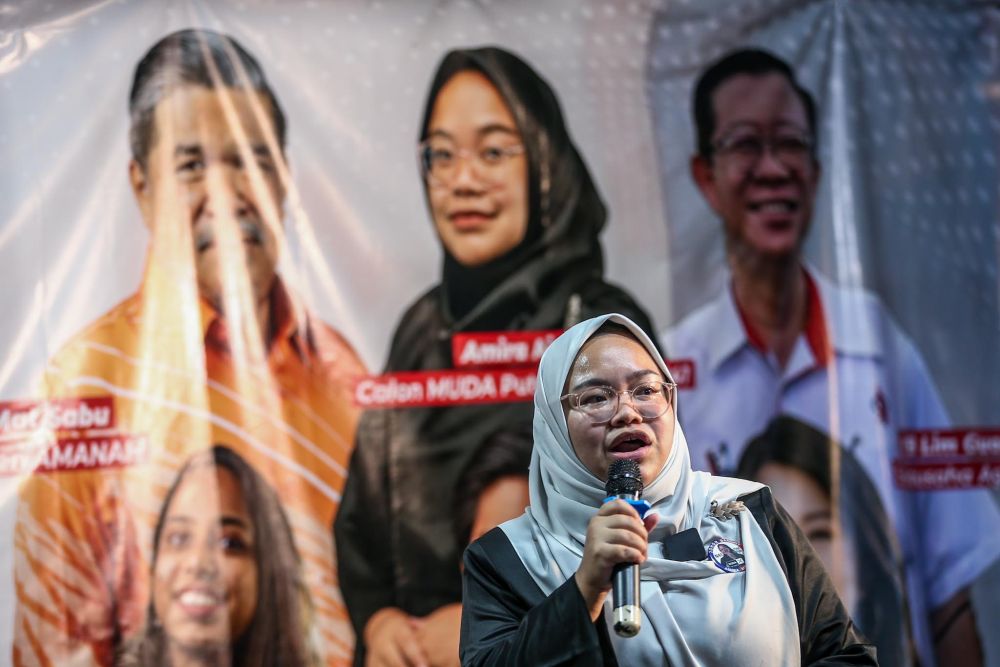 JOHOR BARU, March 11 — Johor appears to have finally caught the election fever judging from the huge crowds of people who turned out in person to catch the political action live in the last 48 hours to polling day tomorrow.

Ever since Putrajaya announced a definite date for Malaysia to transition to the endemic phase — April 1 — people in this part of the country appear to be bolder in venturing outside where large gatherings are held.

More made themselves comfortable in the restaurants and shops just outside the Muda ops centre to listen to Syed Saddiq’s speech, waiting for their chance to meet and greet the former youth and sports minister.

“I always wanted to see him up close. I think the youthful party could win the first seat here,” said voter S. Murali, who stood on the pavement as he held up his smartphone to record the arrival of the Muar MP.

Other major political personalities who came out to support Amira and Muda in their maiden electoral foray were Amanah president Mohamad Sabu as well as DAP’s Yeo Bee Yin, Howard Lee and Liow Cai Tung, the defending Johor Jaya candidate who is contesting under the Pakatan Harapan (PH) coalition banner.

Last night’s crowd was bigger compared to the turnout for the ceramah held two nights ago at the same place to commemorate the International Women’s Day.

With the finish line in clear view, all parties have been making a spurt in campaigning these past two days. The biggest guns have been crisscrossing Asia’s southernmost corner daily to cajole Johoreans for their precious vote.

Federal Opposition Leader Datuk Seri Anwar Ibrahim has been among those actively hitting the stump almost every day since last week, even though Parliament is currently in session.

“I just returned from Selangor to vote, and I am bringing my family to listen to Datuk Seri Anwar’s ceramah here,” Johorean voter Rosli Abdullah when met at the event.

Amanah’s Mohamad and DAP secretary-general Lim Guan Eng were the other two personalities headlining the PKR ceramah. The Anwar-Mohamad-Lim trinity is set to headline the last leg of ceramah today, with the PH grand finale tonight slated to be held at Bukit Batu in Kulai.

PKR is contesting 20 out of 56 seats in the state election and decided to field them all under its own party flag instead of the PH coalition banner this time around.

Barisan Nasional (BN) has been pulling arguably some of the biggest crowds in Johor this past week.

The Umno-MCA-MIC team is fielding a large number of election rookies this time, but people have been lured out of their homes to watch the ruling coalition’s frontman Datuk Seri Najib Razak.

Hundreds of people gathered in Skudai last night as Najib spoke. Based on a video clip shared on Facebook, the crowds were made up of hardcore supporters who paid scant attention to physical distancing rules as they rubbed shoulders while cheering the former prime minister who was convicted of a multitude of criminal and corruption crimes in the misappropriation of RM42 million from SRC International Sdn Bhd, a former unit of 1MDB.

“I have been visiting four Feldas today. They are still strong fortresses for BN,” Najib said as the crowd cheered on.

Next to him on the makeshift stage was Sabah Umno leader Datuk Seri Bung Mokhtar Radin who also addressed the audience.

Another member of the ruling team but of a separate coalition, Perikatan Nasional (PN), has been focusing its election efforts on the rural seats in Johor, especially where the Felda settlements are to sway the BN’s vote bank.

The coalition chairman Tan Sri Muhyiddin Yassin has been hitting the ground hard every day for the past week.

In his speech, the Pagoh MP highlighted his achievements as prime minister from 2020 to 2021.

PN’s last hurrah is slated to be held tonight in Muhyiddin’s hometown of Pagoh.

The Johor state election marks the first time voters aged 18 to 21 can cast their ballots after the implementation of the Undi18 Bill and the automatic voter registration system.

The state election is also seen as a way to test public support for BN, which currently heads the government in Putrajaya and several states, and to determine when to call for the 15th general election.

The state of Johor, which borders Singapore with its mix of urban, semi-urban, semi-rural and rural seats with mixed ethnicities, could also serve as an indicator on how the public would react after two years of pandemic.