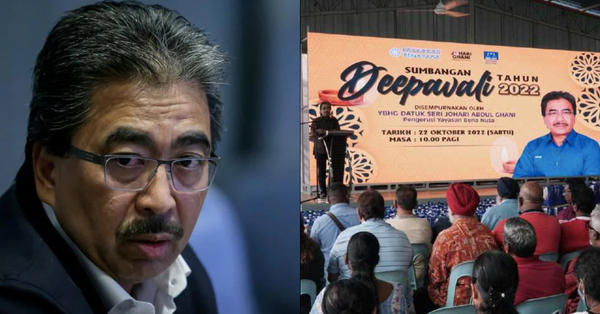 Johari — who is the Federal Territories UMNO chief and served as the second finance minister from June 2016 to May 2018 — reminded voters that it is important to check the representatives’ performance as the need for a good and competent government post-GE15 cannot be taken for granted.

“This is something everyone must realise and it is a part of political maturity that we need to achieve,” he said, adding that a strong opposition is also needed to back sound policies instead of populist ones.

“We need a balance of old and new faces. We need competent leaders with a good team to sail through,” Johari was quoted as saying by New Straits Times yesterday, 25 October, at an event in Kuala Lumpur.

According to Johari, who lost his Titiwangsa parliamentary seat in GE14, credible leaders are needed to govern the country given Malaysia’s economic instability post the last general election.

“For the past four years, the country has been facing economic challenges,” Free Malaysia Today reported him as saying, adding that while the government’s revenue has stagnated, its debt has increased.

Photo of Johari speaking to the residents of Pandan Village and Maluri Flats in Titiwangsa.
Image via Berita Harian

According to Johari, a review of the economic plan is also needed to avoid Malaysia from becoming a debt-burdened country like Sri Lanka

He cautioned that if the country’s economy remains as it is now, the government would have to borrow in order to provide further assistance to the people and this would affect the lives of future generations.

“At the end of the day, whoever forms the government must do so with a competent cabinet. Without this, you can see how the economy has fared over the past few years. You must introduce policies that are not popular if you have to. It may not please everyone, but the future generation will reap the benefits.”

Johari pointed out that the spikes in government revenue in 2019 and 2022 were due to the special dividend given by Petronas, explaining how this isn’t sustainable as it has negatively impacted the company.

“We can see that in 2016 and the following year, their rating was A+. Then it started dropping to A- when the dividend was paid out. Petronas is now rated as triple B plus,” he said.

He also touched on the previous Pakatan Harapan-led administration’s decision to scrap the Goods and Services Tax (GST) despite the fact that it was globally recognised as a good tax system.

Johari, who lost his Titiwangsa seat to Bersatu’s Rina Harun in a three-way fight, is said to be making a comeback for the seat in GE15

A person familiar with the matter told Malaysiakini that the people in Titiwangsa really want him to contest in the constituency again, as he has been consistent in serving them despite not holding the seat.

“Before this, he was the Titiwangsa MP. When he was gone (lost), a lot of people didn’t get help because he wasn’t around. He (Johari) is definitely contesting. The people want him to contest,” the source said.

Rina is said to be running in Sepang.

GE15 is scheduled to be held on 19 November:

If you’re a first-time voter, you may have a lot of questions about the processes of an election. Read our explainers here: